Jesus and the Wild Cats 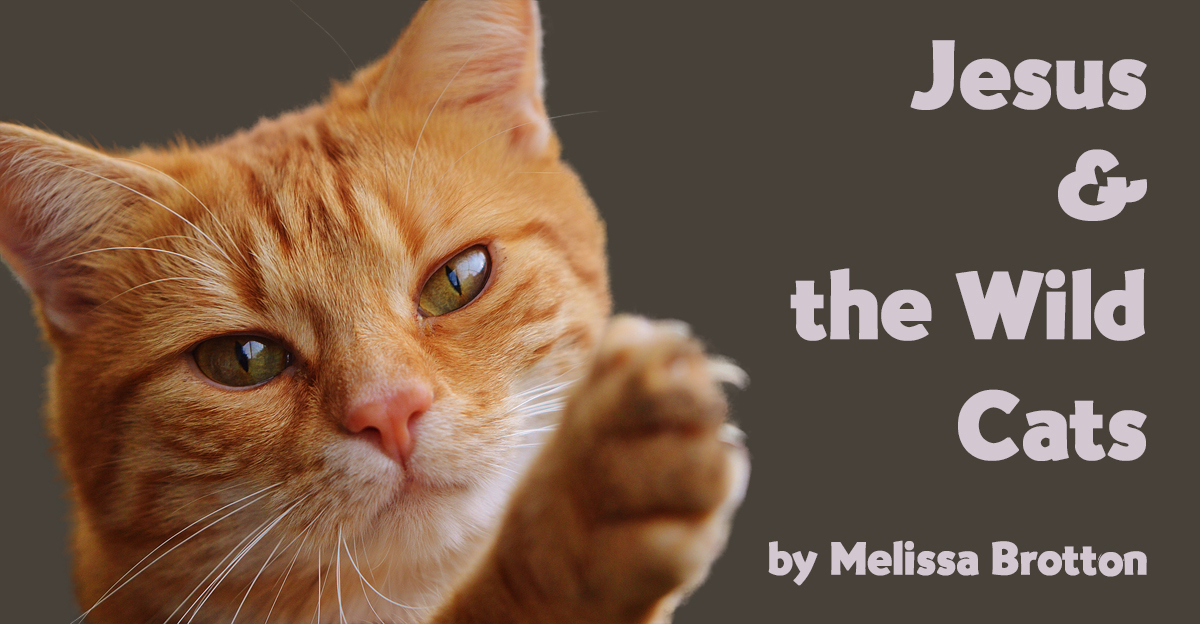 And I am sure of this, that he who began a good work in you will bring it to completion at the day of Jesus Christ.  (Philippians 1:6, ESV)

Dawn steals across the canyon behind a cat sanctuary where I volunteer. I kneel down just outside the entrance and call to one of many residents inside.

“Leeeeooo!” I make my voice whine like a meow.

A large orange-and-white tabby appears from around a corner and trots toward me where several other occupants are waiting their turn for head rubs. He pushes his way up front and accepts his share of scratches, turning his broad forehead from side to side and purring with vigor. A black longhair, envious of my attentions toward Leo, takes a sudden swipe at him, claws extended. I quickly pull my hand back to prevent it from being shredded in a cat fight. But to my surprise, Leo does not retaliate. Overpowered by the joy of seeing me again, he instead rubs his face against the other cat’s as if completely unaware of the attack. But Luna strikes a second time, and again Leo is undaunted, completely focused on me. Luna lets him have it a third time. I am sure now that Leo, with his history of street life, will cave and begin to terrorize her, but he simply steps aside, solely intent on getting my caresses. I marvel over this change in Leo, for it was not always this way.

Up until a year ago, Leo was what we call a community cat, a semi-feral cat that makes its living door-to-door. I spotted him at the base of a tree in my yard one day. As I walked closer to him, he began to cry loudly, a sign of abandonment in cats. He circled the tree and continued to “talk” to me about his predicament. Soon after this incident, he began a pattern of stopping by my house to eat. I also started to notice his lion-like form visiting other homes in the neighborhood. Eventually, he and I grew to be friends, and he let me touch him, but I took care to avoid his claw swipes. Over time Leo became the king-cat of the neighborhood, notorious for bullying other cats. He established his territory for several blocks, and it was not unusual to see Leo in full stride down the street or cruising through yards like a boss.

But eventually the regal life of a king street cat comes to an end. On average, street cats live only two to three years, inevitably killed by cars, predators, or disease. One evening, while taking a walk, I came across Leo on the edge of a busy street and looking as if he were planning to cross. Concerned, I called out to him, but he answered with a gruff, sharp warning as if to say, “Leave me alone. I need to concentrate.” I watched in half agony, half amazement as he negotiated heavy traffic, waited for an opening, and dashed to the other side. Not long afterward my alarm was raised again when another well-loved community cat was killed by a coyote. Time was running out on Leo, and I felt I had to do something.

In southern California, where we are saturated with cats, it is difficult to find a rescue that isn’t full. Because it is necessary to triage, kittens must have first dibs due to their vulnerability and adoptability. Getting a semi-feral adult into a rescue is nearly impossible. Fortunately, a dear friend of mine who owns a cattery agreed to take him.

But how to capture him? So far, Leo had successfully evaded conventional traps, and I could not pick him up by hand without risking life and limb. I borrowed a special manual trap from a rescue friend. The night before I set the trap, Leo happened to be in my driveway, so I called to him and sat down on the pavement. He trotted over to me and lay down, twitching his tail contentedly. There was a full moon, and the air had cooled. I stroked Leo’s back and spoke softly to him about my plans to take him to a better place. Leo purred, his golden eyes reflecting light from a streetlamp. I studied his battle-scarred face. For the first time, I was not afraid he would strike at me, and he didn’t. We simply watched the moon together, my hand resting on him.

Early the next morning, I set the trap and waited for Leo to come to breakfast. I checked the time and nervously watched the corner of the street where he was expected to appear. There would be only one shot at catching him. If it failed, it could cost all my hard-won trust. I glanced at the time again. Still no Leo. Had he met with the same fate as the other cat? I kept my eyes on the corner and silently prayed.

Within moments Leo appeared at the corner and turned towards me. I braced myself, wondering if he would really go for the food placed under this new contraption. I needn’t have worried. Trusting me without hesitation, he was underneath the trap-hood within seconds and gobbling up the food. I waited until he pulled his tail inside the safety zone, then pulled the string and watched the trap fall down neatly over him. Moving quickly, I covered the top of the trap with a large sheet to prevent his thrashing. When I peered beneath the sheet, Leo flashed me a dour look. “No, boy, this is not the end,” I sought to reassure him.

Leo yowled, bewildered, but I knew I couldn’t cave and let him out again. I had to carry out the full plan of getting him to the clinic, where he would be neutered and have his vaccines and flea treatment. Sure, he felt betrayed. How could I tell him he was trading one day of misery for a lifetime of safety and bliss?

Now, one year after that eventful morning, sitting with Leo and his new friends at the door of the cattery, the truth of his transformation hits me. His past behind him, no longer fighting other cats, dashing across busy streets, or hiding from predators, he is safe and free – even to the point of turning the other cheek.

Seeing Leo’s progress in this way calls to mind Jesus’s promise that he has a place prepared for us. But our learning to trust him can be something of a wild-cat experience. We may lash out from time to time when obeying seems difficult. If we let him, Jesus will transform our wild, lashing-out antics into warm, friendly greetings. Though we sometimes feel confined or confused by what he is doing, he works gently to move us past fear, sitting by us through moonlit nights, whispering assurances of his good plan, waiting for our trust to bloom into eternal friendship with him.

Melissa Brotton teaches writing and literature courses at La Sierra University. Her special areas are nineteenth-century British literature and religious studies. She has published on the poet Elizabeth Barrett Browning and Biblical ecology. She spends a lot of time outdoors, paints, and writes nature stories and poems.