The Name of Names

When I AM at the center of your life,

I shall write My own Name upon you

and wrap around you the mantle of its protection.

You shall cherish that Name and bear it with honor,

but understanding fully its meaning and power.

What’s in a name? To our pragmatic society, a name seems to be merely a label, used for the convenience of identifying something. But historically names have been much more than mere tags, and even today, as detached and impersonal as we often are, there is evidence of the deep meaning names can hold.

In many primitive societies, one person had many names. (Speaking of labels, what does the word “primitive” mean? It tends to carry the baggage of backward, coarse, even stupid. If you look it up, you’ll find it means prime, or first. Sometimes it even has overtones of “causative.” We can learn a lot from primitive societies.) A new baby was given a name at birth, usually by a parent. This name might memorialize some event around the birth, or it might refer to a personal characteristic of the baby’s looks or personality. It might even be something the mother saw while in labor, and took as a sign.

Later, the adolescent earned or was given another name, perhaps by the elders of the village or tribe. Again, this name had some meaning to the group. It could be something the child was, or something the family hoped he or she would become. In adulthood, particularly if the person accomplished something deemed important by the group, yet another name could be chosen or bestowed, honoring that achievement. This was often the name in which a person took the most pride because it symbolized the person he or she had become, and showed an important contribution to the group.

Another way to change one’s name was by taking someone else’s name. Historically, there have been three main reasons why a person might bear another’s name: as a slave, as an adopted child, or because of marriage. Slave names could be defined as naming turned inside out. A slave name is a name that you do not earn and do not want, a name that bears no resemblance to you or to your real, God-given life. A slave name may be the final insult heaped upon a life already torn apart.

In the case of adoptions and marriage, changing last names today seems to be mostly a matter of habit, convenience, and easy record-keeping. But we have reached a time in our society when names are once again being seen as something more than labels. In recent years, some who felt there were overtones of slavery or possession in carrying the name of a father or husband have chosen names of their own instead. Sometimes those who do this follow the older customs of choosing a name in honor of a characteristic or accomplishment.

Sometimes in the past, a name change, rather than representing a new stage of development or growth in life, represented an entire change in direction. Someone who had been a warrior and decided to be a peacemaker changed his name accordingly, and so on.

In some societies, people had secret names, shared only with a chosen few. Their families might know, or only their best friends, or spouses. Or the name might only be known to the person and his or her god(s). Names like this were not mere labels. They bore the essence of one’s personhood—they were “who you really were.” Many believed that a person could gain great power over another, if he could only find out that secret name.

Well, if history interests you as it does me, you may find all of this fascinating. If not, by now you are wondering, “Why is she leading us down this primrose path, and what’s it got to do with the third commandment?”

Just this: when God spoke the third commandment, that word “name” meant more to the listeners than it may to us. All of the above principles of naming were present in the societies of biblical times, and most of them are illustrated in the Bible. Rebekah named her first son Red Hairy (Esau) because of what he looked like, (Genesis 25:25), but she named her second Supplanter (Deceiver) because he grabbed his brother by the heel.

Poor Jacob lived up to his name for many years, even though he promised to follow God, and tried to do so. Then one memorable night, the Supplanter had it out with God in person. That was the turning point, as it always is. After God trounced him soundly (and easily) he said, “From now on, you won’t be called Supplanter, but He Who Strives With God, because you have fought with God and won” (Genesis 32:28).

What? Who won? Remember, we don’t live in the real world, but only in the mirror world (what C. S. Lewis called “the Shadow Lands.”) Everything is backwards here, and it’s only when you lose that you win. Jacob—I mean Israel—was starting to figure that out.

Israel named the place The Face of God, and never forgot it.

—Excerpted from Ten Promises Carved in Stone, by Debbonnaire Kovacs 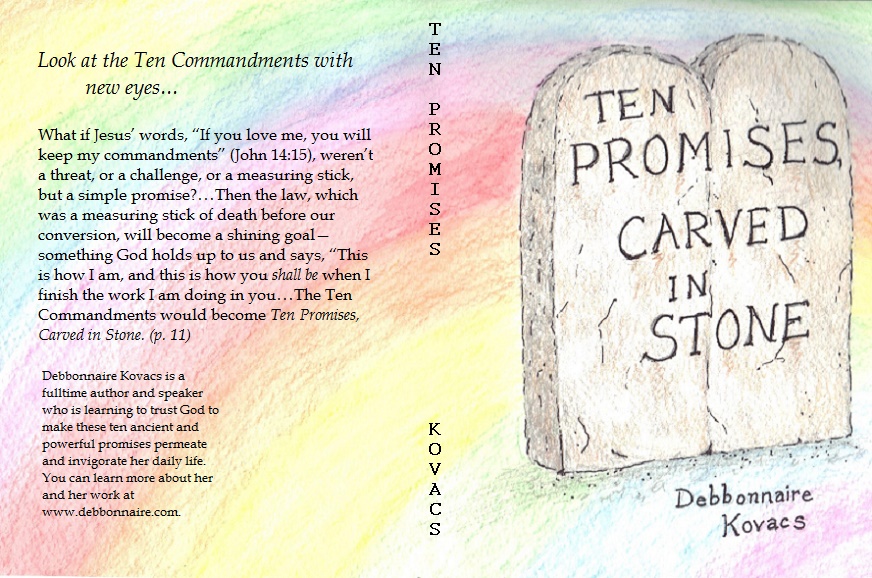 “School In a Cornfield” Gets New Building Launch Pod