14 February 2022 | “It Is Written Canada,” an Adventist media organization that airs television programming on nine networks in Canada, put up a Facebook post on Feb. 6, 2022, that featured a photo of protestors from the Freedom Convoy on Parliament Hill in Ottawa, Canada.

Across the photo were the words, “…WHERE THE SPIRIT OF THE LORD IS, THERE IS LIBERTY.” 2 Corinthians 3:17.

“We are not doing the will of God if we sit in quietude, doing nothing to preserve liberty of conscience.”—Last Day Events, pg. 127.

“Liberty is the very essence of faith.”—Martin Luthor (The Great Controversy, pg. 189).

Religion is increasingly characterized as a source of oppression rather than liberation, and respectful debate is becoming more difficult as feelings take precedence over facts. When governments, no matter their intention, step on our fundamental rights such as freedom of conscience, they step on the very essence of who we are. To stay silent in the face of such challenges is to deny our identity and our very being.

The Freedom Convoy movement was sparked by a vaccine mandate for truckers crossing the US-Canada border, implemented by Prime Minister Justin Trudeau’s Liberal government in January 2022. After a week-long drive across Canada, a convoy of big rigs arrived on Jan. 29, 2022, in the national capital to protest vaccine mandates and COVID-19 measures.

The movement had started out peacefully, but by Feb. 5, 2022, the day before “It Is Written Canada” put up their Facebook post, the crowdfunding website GoFundMe had said it would withhold millions of dollars raised for the protestors, citing police reports of violence, reported British news outlet BBC.

Residents in the downtown Ottawa area had reported rock throwing, property damage and harassment by protesters. Police said they had opened dozens of investigations, including into alleged hate crimes. Some downtown Ottawa businesses had to shut down temporarily, reported U.S. news outlet CNN.

The “It Is Written Canada” post was taken down almost 24 hours after it was posted, on Feb. 7, 2022. However, in that time period the post had generated a storm of comments.

“It Is Written Canada” is a branch of the Adventist media evangelism organization It Is Written. It is the “official evangelistic ministry” of the Seventh-day Adventist church in Canada, according to its website.

The Adventist church’s official statement on Church-State relations says, “At the heart of the Adventist message is our abiding belief that freedom of conscience must be guaranteed to all.”

The statement, though, also reads, “Adventists should not, however, become preoccupied with politics, or utilize the pulpit or our publications to advance political theories.” 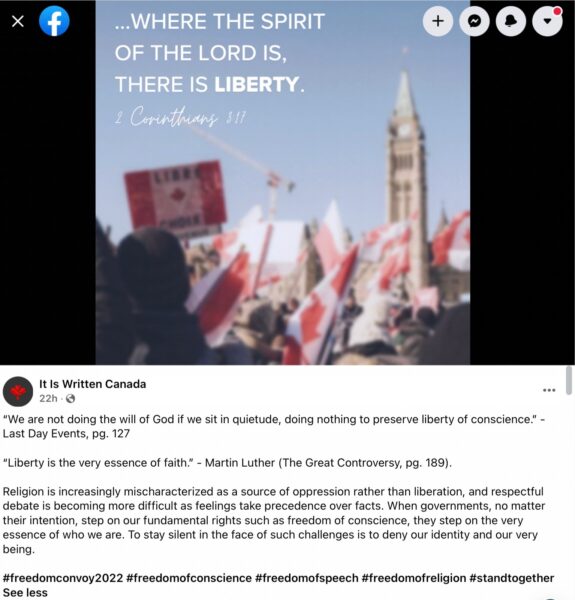 (Photo: This “It Is Written Canada” Facebook post seems to support the controversial Freedom Convoy in Canada. The post was taken down the day after it was put up, with no explanation. Photo via screenshot.)

Jesus Married?! Anti-Vaccination Is Not Our Message