Is the Bible Unclear on LGBTQ Questions? 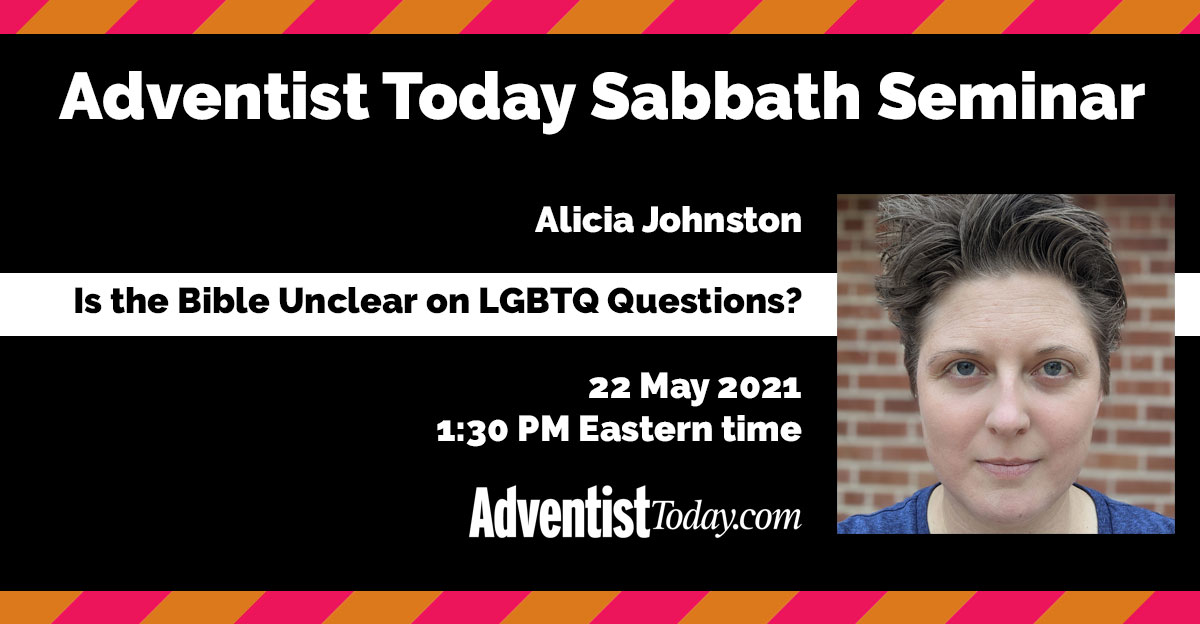 This week’s ATSS conversation will be based on this article by Alicia Johnston.

When getting my degree [at the Adventist seminary], I spent as much time as I could in the Biblical Studies departments learning about how to understand the Bible. I got to know many of the people whose work I critique now. They are people with deep compassion, kindness, and love for scripture. To this day I can’t question their sincerity and commitment. Even though I have critiques to offer, I can never lose my respect for some of these generous and intelligent people. They mentored and cared for me. They are brilliant theologians who dedicate their lives to understanding the text.

So the question has to be asked: why was I seeing things they didn’t? I could never actually know the answer to such a personal question.

But I have observed something helpful: When you really start to read your Bible, it raises a lot of questions. You encounter slavery, genocide, violent tribalism, sexual assault, and all manner of challenging topics and moral problems. Serious students of scripture are aware of this.

So what do we do? Too often we just ignore these texts.

But my seminary professors weren’t content with that approach. We learned to read the Bible better. We learn to understand the intent of scripture and the movement of God to a better world. I learned a lot about these things in seminary.

In my conversion to affirming theology, there was not one single time I used a tool I was not taught in seminary. There is not one time I used a method of interpretation that isn’t already considered conservative when applied to other subjects. \

When we talked about slavery, the nuance was deep and the contextualization careful and thorough. When we talked about genocide in the Old Testament, the moral questions were complex and the textual detail was intricate. Motivations, meaning, the movement of scripture, the character of God, and ultimately the primacy of love and justice took center stage.

Yet when we talked about gay, bisexual, and transgender people, the nuance vanished! Instead, we spoke starkly, almost mathematically, about the laws and behaviors, stripped of cultural meaning. That it was consistently forbidden was enough. What was actually being forbidden then, or who gay, bisexual, and transgender Adventists are today—these were nuances we never acknowledged.

I know there are those who will say that focusing on the plain meaning of a few texts is enough. They will say that a deep, scholarly study of scripture is dangerous. They prefer simplicity. They think academics are too liberal and susceptible to manipulation. They think the whole problem is that these academics use cultural context to interpret scripture. They want a plain reading of every text.

But I’ve never seen these folks look honestly at the really tough parts of scripture. I’ve never seen them wrestle with understanding the Bible. I’ve only seen them proof texting and explaining away or skipping over what’s uncomfortable. If you want to avoid nuance and complexity, you must be careful to ignore large portions of scripture. It probably goes without saying, but if you ignore large portions of scripture you don’t care about the Bible as much as you might think.

The process of questioning and learning is hard work, emotionally and intellectually. But why should we expect mining the scriptures to be easy? I’ve returned again and again to the text, testing each idea against what I found in my Bible. I’ve compared scripture with scripture, struggling to understand the intent of the author and the will of God. I’ve read all sorts of opinions and analysis. I’ve mined the original language and the cultural context. I’ve gone back again and again and done my best to be open. I’ve prayed for help at every step. I’m still doing it. I’m trying to stay open and maintain curiosity. This is exactly what I believe God wants from us. Sadly, this rigor was missing anytime my seminary professors talked about sexuality and gender.

We can do better. I believe we must do better, and so I’ve dedicated much of the last three years of my life to writing a book that can provide some perspective I believe we need. Agree with me or disagree with me, either way you can probably see that the Bible has more to teach us, and the conversation is worth having. In fact, for the sake of the LGBTQ people and those who love them, we must do everything we can to learn all the Bible has to teach us on this subject.

Alicia Johnston holds a M.Div. from the Seventh-day Adventist Theological Seminary, as well as an MA in Clinical Psychology. In 2017 she came out as LGBTQ affirming and as bisexual in a viral video that resulted in her forced resignation as a pastor in the Adventist Church. Her story was featured in several news outlets including NBC and Religion News. In addition to a podcast and blogging on affirming theology, she has also been working on a book explaining affirming theology for Seventh-day Adventists. Her passion is helping Christians see why they can affirm same-sex marriage and support gender transition. She lives in Phoenix, AZ with her wife and dogs Prescott and Mingus.

Loren Seibold is the Executive Editor of Adventist Today website and magazine.

This class is over. You can listen to the presentation here.

The class is intended to last about 2 hours, though the conversation may go longer.