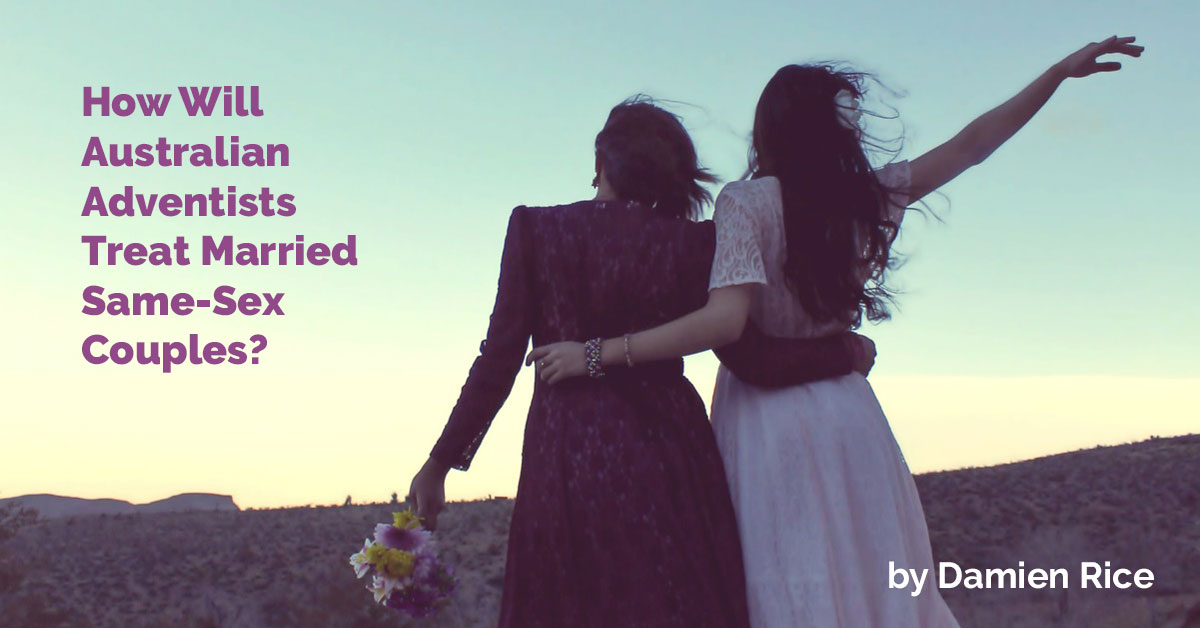 Editor’s note: Adventist Today takes pride in publishing opinions from points of view you will not find elsewhere in the Adventist press. We recognize that pieces on LGBT people are especially controversial. You are welcome to disagree with this author—or any of our authors or commenters—as long as you do it courteously. If you violate our commenting guidelines, your comment will be removed. —Loren Seibold

Adventists in Australia are nervously anticipating the results of the nation’s same sex marriage survey, which closes on 7 November, with the outcome expected to be delivered on the 14th. Fear mongering and vilification on both sides seems to have been directed largely at opponents rather than same-sex couples, who are set to benefit from changes to the law. Already two thirds of Australians have voiced their opinion on whether the law should be changed to allow same-sex couples to marry. Recent polls suggest the outcome is likely to reflect previous polls with approval hovering between 60 and 65 percent.

The shifting tides are an unwelcome reminder that the church has lost its moral authority, and certainly any reverence for its voice in the public square. A recent royal commission into systemic child abuse within churches and the widely publicised incidence of domestic violence in Christian homes has all but quelled the enthusiasm of the church for public debate.

A few years ago, when same sex marriage was legalised in New Zealand, I was consulting a ministry director who opined that we had already lost that battle, and that it wasn’t even an issue for our young people; they can’t understand why it’s an issue for the church. Individual rights have superseded collective morality. Further, the church’s sketchy response to sexual sins (child abuse, fornication, adultery, pornography, divorce and remarriage) have not established a strong moral position from which to respond to same sex marriage. Nor have those responses typically been accompanied by understanding or compassion.

Adventist leaders have given study to the complex issues surrounding same sex attraction and the spectrum of intersexed physiologies, but the church at large seems altogether unprepared to navigate this changing landscape.[1]

Of course, the survey, much like our own Theology of Ordination Study Committee (TOSC), is non-binding on the Australian parliament. Without any actual legislation or guarantees on the table, it seems unclear just what the impact will be on religious rights and freedom of speech. The likely change will bring inevitable infringements upon our moral sensibilities, but the church itself will have legal protections. But with civil celebrants now conducting 75% of all marriages in Australia, these will be concessions for a minority rather than preservation of a long-established teaching of marriage as only between a man and a woman.

The church may be largely responsible for our position on the periphery of this debate. The reason? A failure (or perhaps unwillingness or inability) to address fundamental questions raised by Genesis. As an historically restorationist movement, Adventism champions the Edenic institution of marriage between a male and female in Genesis 1. This is the basis for all our other sexual ethics and standards. However, we have failed to comes to terms with how the prior divine thesis found in Genesis 2—“it is not good for a man to be alone”—never mind God’s response which was to make a “helper suitable for him”—should be applied in a Genesis 3 world.

We have failed to comes to terms with how the prior divine thesis found in Genesis 2—“it is not good for a man to be alone”—never mind God’s response which was to make a “helper suitable for him”—should be applied in a Genesis 3 world.

The church has failed to embrace LGBTQI people and like too many other wounded people leaves them isolated and marginalised on the fringes of church life. If God’s alternative to the aloneness experienced by many same sex-attracted people in a fallen world is the substitution of a loving church family for the emotional and physical intimacy of a mate, we have failed to provide it. Until the church offers a meaningful response to the aloneness of LGBTQI people I suspect prohibitions will largely be ignored.

I recently attended an Adventist church service beautifully crafted around the theme of family, with an emphasis on love and inclusiveness in the home and church. A portion of the program was devoted to announcements in which the presenter, I think without harmful intent or cognizance, reminded the congregation of the same sex marriage survey and urged congregants to fulfill their Christian responsibility—the clear implication being a “no” vote. I was glad a same sex couple who had been in attendance a few weeks earlier was absent.

A common theme in Australian LGBTQI stories has been a strong desire for dignity, recognition, normalization and societal acceptance. It is hoped the right to marry will provide this. Adventists along with most churches outside of liberal mainline Christianity have not actively embraced LGBTQI people or been proponents of legal protections for same sex couples in de facto relationships. Had we done so, perhaps we would have garnered some credibility, received a more sympathetic ear to our advocacy for the traditional view of marriage and become co-creators in a more just and inclusive society. Unless and until we manifest the love of Christ we are unlikely to receive the respect and dignity we believe our convictions deserve.

While affirming the Genesis ideal, Jesus challenged the sexual ethic of his day as he embraced both women and single people as equal partners in the kingdom in a time when married men were socially and spiritually preeminent. The Gospel record of Jesus’ interaction with a centurion is one of compassion, as Jesus heals what many scholars believe was the centurion’s young lover.[2] Notably, neither Jesus nor the inspired writer takes the opportunity to remind us of the heterosexual foundations of marriage, give an injunction for the centurion to go and sin no more, or proffer a warning that something worse might follow. The defining principles of this story are not sexuality but rather faith (or fidelity, in its truest sense) and, demonstrably, Jesus’ indiscriminate grace. In the absence of any contrary teaching on homosexuality by Jesus, his example must provide the foundation for an Adventist response. The story also serves as a timely reminder to us that many faithful faggots will enter the Kingdom before the bigots among us.

How strikingly transformative it would be if we in the church could say to LGBTQI people trying to do life and faith out here on the margins:

I see you.
I hear you.
I feel for your pain.
I respect your faith.

You are loved.
You are valued.
You have dignity.

Regardless of what they tell you
this is your place too.

No matter what injustice you see
or ignorance you hear
or rejection you feel
the Kingdom belongs to you.

Regardless of the outcome of the Australian marriage survey and the legislation that will follow, I wonder how my congregation will respond when a married same sex couple seeks baptism and membership of the Adventist Church? Will gay spouses be required to divorce or enjoined to “remain as they are”[3]. Will we reactivate our discipline for fornication when it involves LBGTQI singles? Will we provide for these human people the same loving, inclusive and accepting church community we so proudly promote? Will it meet the deep-seated loneliness and need with which they too were created? The sad reality is that many congregations will never have to answer these questions, because LGBTQI people will be repelled from our church.

Those congregations that do will most likely be given simple answers to complex problems and left to react from their own biases and ignorance resulting in wide and inconsistent practice, heated disagreement, uncivil rhetoric and unchristian attitudes to which we have become accustomed. We don’t do well with the “other”—those who are different, who we don’t understand, or who we disagree with.

As the marriage debate in Australia winds down, I suspect that for Adventists it is just winding up.

Damien Rice is a former pastor and conference president currently working as a leadership and human strategy consultant. He tweets at @damorice.