How the Adventist Church Works Down Under

My reflections here are intended to provide a window into the Adventist organization in Australia and New Zealand, which many may find difficult to understand when hearing about the recent summary dismissal of evangelist Gary Kent. These reflections are wholly personal. They reflect my understanding and experience, as someone who was in the organized ministry for an extended period in both countries. Up until 2000 the Trans-Tasman Union embraced a huge part of Australia and all of New Zealand. Pastors and other staff flowed freely between these two nations up until the realignment and consolidation of five South Pacific Union territories.

Additionally, my mother was on the South Pacific Division Executive Committee from 1980 to 1990 as a laywoman, where she attended the regular Executive Committee meetings. She was a strong and respected independent voice there: when Sister Marks rose to speak people knew her speeches would be short, considered, fearless and appropriate. I enjoyed extended discussions about the nature of the organization with her.

Australian and New Zealand church leaders have long sourced nearly all pastoral and organizational staff from just one institution: Avondale College. Though this is not as true as it was in the past—volunteer and bi-vocational pastors are used as part of the ministerial team now, and multiculturalism has forced some changes—it remains the case that  reaching ordination here is often difficult, and if for any reason one leaves the pastorate return is extremely difficult and in many instances all but denied. This has allowed the development of an old boys’ network that has been very effective in circling the wagons and engaging in mutual back-scratching—something my mother often commented on from her time on the Executive Committee.

For many years, this was a culture in which independent thinking was discouraged. The dominance of a single mould for Australian Adventists, and the exclusion of people who would disturb the equilibrium, was virtually assured. Independent ministries weren’t necessary, given the very successful evangelistic model of Australian Adventism, headed of course by Adventist evangelists whose dominance was unquestioned until the 1970’s.

Enter Dr Desmond Ford. Right through the 1960’s Des, as the major theological mind in Australian Adventism, became the giant-slayer with his effective opposition of Robert Brinsmead. In this process Des also brought a new, more nuanced Adventist belief system, and a welcome gospel emphasis—this long before his doctrinal divergence in the late 1970’s. It was largely the old Australian evangelists that formed the backbone of the theological opposition to Des in the South Pacific Division—two models of Adventist belief locked in a titanic struggle.

Regardless of the perspective from which one views this struggle, one of the most remarkable features was the theological about-face of the South Pacific Division. As new theological winds blew through Adventist churches in Australia and New Zealand, there came an end to the ministries of hundreds of Adventist pastors. Both good and bad human resource practices were used in this process. Too often the end justified the means.  And the supposed lack of effective mechanisms to review ministerial dismissals eased the consciences of some church administrators.

An example will show how employment disagreements could be mishandled. The New Zealand government mandates a contract between employer and employee, though there were  exceptions for certain roles in a religious organization. In the early 90’s it was thought best to offer all conference personnel such a contract. Later in that decade this employment contract for Adventist ministers was withdrawn and these employees were put back on the South Pacific Division wage and salary scale.

Yet as late as 1996 one conference administrator could write to a pastor who threatened legal processes to review decisions regarding his employment status: “You are not an employee, neither is the Conference your employer and the Conference is very clear about this.” This was written despite the fact that the individual concerned had a New Zealand model employment contract with his conference! When that individual claimed the provisions and protections of the South Pacific Division Working Policy, he was told that he had waived his right to appeal to the employment provisions of the Working Policy by signing his New Zealand Employment Contract! His employment was neither protected under the provisions of his New Zealand government sponsored employment contract, nor by the South Pacific Division Working Policy. In short, his employment was totally subject to the whims of the individual church administrator. Too tricky by half!

I’m confident that church administrators in Australia and New Zealand have progressed beyond these practices of yesteryear. Certainly, the extreme reticence to accept pastors as employees is a thing of the past. There is now, probably, a greater willingness to adopt employment and human resources practices that are in line with best practice, where the end doesn’t justify the means.

It is Written Oceania is based in offices a short distance from Avondale College, some sixty miles north of the South Pacific Division Headquarters, and near to the offices and studio of 3ABN Australia which was established around ten years ago. The Carter Report’s office is in the same area, and Amazing Facts have also recently set up an arm of its operations in Australia.

The Adventist church organization in Australia has never enthusiastically embraced such unofficial yet supportive ministries as these. There are probably many reasons for this. Firstly, Australia is a very egalitarian culture with an intense dislike for tall poppies and self-made celebrities. Second, the Adventist population in Australia is quite small, thus creating the need for the lion’s share of the relatively scarce financial resources to ensure the health of its institutions. Third, there have been attempts to develop independent health and education institutions, most of which never really blossom and grow. Fourth, Australian Adventist gurus would probably prefer our monetary largess to be directed toward our mission territories among the South Pacific island nations. Last, it is easier to keep theological divergence in check in the absence of independent ministries.

Speaking of theology, Adventists in Australia and New Zealand have not been troubled by the same shibboleths that emanate from conservative American religion. For example, most here are relatively open to things such as the ordination of women. The use of the wedding ring has never been an issue.

Such things are not necessarily to be explained by any progressive streak, however. Adventism in this part of the world, though it exists in a thoroughly secular society, is in the main lacking a full blown pluriform manifestation. Progressive Adventists do exist in Australia, but they are yet to attain the critical mass that is visible in certain other areas of Europe and America. We here are much more likely to be missional pragmatists. The developing emphasis on a new discipleship paradigm, spearheaded from the newly established Discipleship Ministries team at the South Pacific Division, is a prime example of missional pragmatism.

Before the late 2000s, It Is Written Oceania had operated for several years as a start-up ministry under the wing of Pastor Gary Kent as part of his ministry with a new church plant in inner Sydney. George Vandeman’s It is Written program had been telecast on Australian TV from the 1960’s to the 1980’s, when it was discontinued for various reasons. Gary Kent, as a successful evangelist and pastor, was the right man to bring the It is Written franchise back to Australia. According to Daniel Livingston, a past It is Written Oceania manager, “IIWO has always been church-owned, and Gary Kent has always been an employee of the SDA Church.” IIWO was fully accepted as one of a suite of media ministries under the umbrella of the Adventist Media Network, the name given to the communication, media and publishing arm of the South Pacific Division.

On 25 May 2017, two Australian Adventists provided contrasting reflections on the sad saga of Gary’s dismissal on the Adventist Record website. (The Record is the official Adventist news magazine in the South Pacific). Pastor Angus McPhee, a well-known Australian pastor, wrote concerning the dismissal,

“Because of the terminology used [in the widely-circulated letter to donors of It is Written Oceania], there is innuendo and inference. Consequently, Pastor Kent’s character is now in question, and that publicly…. It has come to the point where people are questioning, not Pastor Kent, but the administration of the Media Center and, by implication, that of the South Pacific Division. The tone of the news release and the tone of responses to it call for clarity from the Division leadership about the events that precipitated the dismissal. The sooner this is provided the better.”

Daniel Livingston, the second commenter, was the It is Written Oceania manager for three years when IIWO first came under the umbrella of the Adventist Media Network:

“Reasons for dismissal can include failure to comply with reasonable directives of the employer. If that’s the case (and I honestly have no idea exactly what happened), the employer isn’t obligated to tell the world all the details of the employee’s conduct. It’s actually in everyone’s best interests for that to stay out of the public domain. I don’t know what happened, and to be honest I don’t feel I need to know…. I am a personal friend of many of the key players, and want to keep it that way. So is God (a friend to all of the key players). Honestly, leave it to Him.”

The South Division Working Policy has a very workable policy for Mediation and Grievance that could well assist in reviewing this story with a view toward resolving some of the angst and providing redress. The policy is freely available online. It has been used numerous times to bring a measure of healing in situations such as this, though the Adventist organization has in times past sought to resist its operation, including one occasion where a church administrator chose his neighbour and friend to be the independent chairperson of a Grievance Committee to which he was a party.

The ‘Mediation and Grievance’ policy provides a two-stage process of healing. First, there is a mediation process conducted between the two parties by a competent and qualified professional. If, in the opinion of the aggrieved party, that has failed to bring resolution of the matter, one may apply for the establishment of a properly constituted in-house Grievance Committee which will deliver formal findings on the matters before it, after holding a majority vote. The Grievance Committee is designed to consist of two or three individuals from each party in dispute with an independent chairperson. All committee members are to be Adventist members and the chairperson was a voting member.

As stated by the above commenters, none of us yet knows the actual trespasses which led to Gary’s dismissal. Right now, rumors dominate. Still, my desire is that Gary may receive an anointing for the healing of the ‘slings and arrows of outrageous fortune’ he has so recently suffered. Undoubtedly, Gary is right now experiencing the pain of having his ministry ripped from him after having invested his life in the employ of the church. The personal pain may be compounded by the sense that things have not happened decently and in order. All parties would benefit from our prayers. 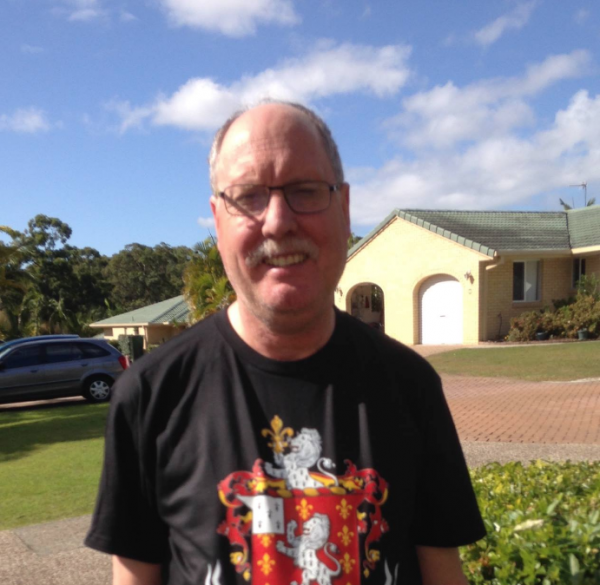 Peter Somerset Marks is retired on the Gold Coast, Queensland, Australia. He is a graduate of Avondale College, Newbold College, and the University of New South Wales, with a MA (Religion) and a Master of Information Management & Librarianship. He has served the denomination as both a pastor and professor.