How Des Ford Enriched My Life 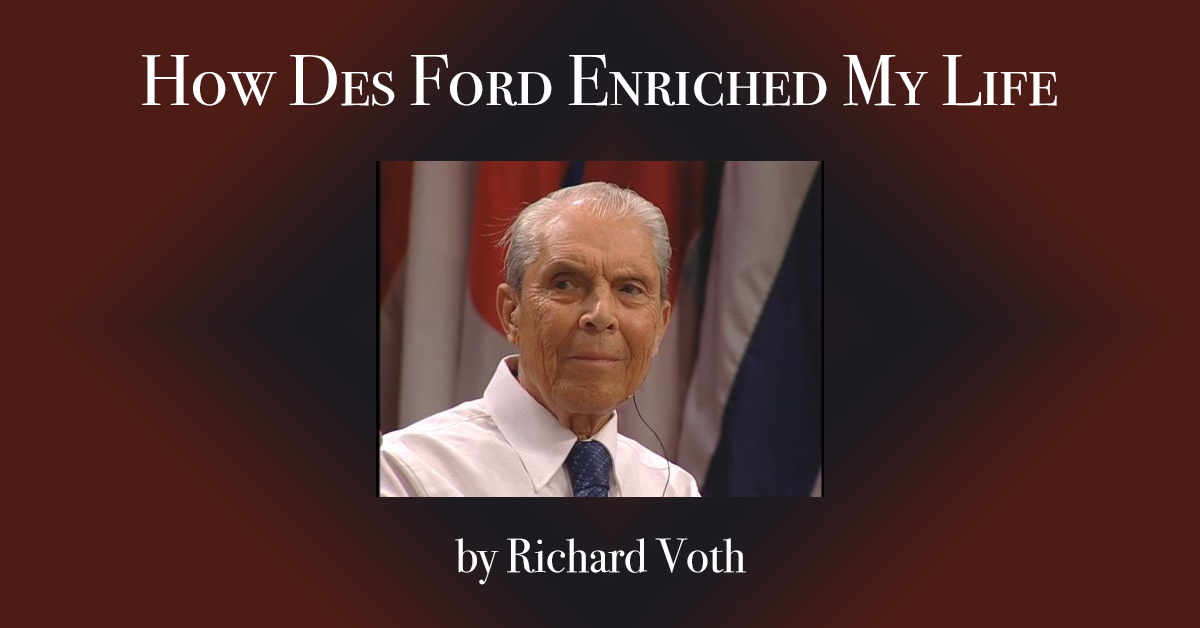 Des Ford’s knowledge of the Bible and Mrs. White and how he shared those insights with us is something that I will always appreciate. His ability to tie things together from the Old and New Testaments was amazing to me. On almost any topic he would quote Bible text after Bible text to support his view, doing so without notes and entirely from memory. Des would tie things together in a way that was quite often new to me. And he would consistently connect them to the gospel or “good news.”

I wonder if people who say he did not support Mrs. White ever heard him speak? He often commented on the influence she had in his own personal journey of knowing Jesus. In fact, he quoted Mrs. White in many if not most discussions.

His focus was on the gospel—the good news. In every talk or sermon he would come back to Jesus, and what the gospel is about. As a young teacher in the Business Department at Pacific Union College at the time he worked there, it was amazing to contemplate the connections Des made to Old Testament stories as well as those from the New Testament. When discussing topics considered by some to be controversial, Des would say that he was going to give us his opinion and the reasons why he believed them to be correct. He would say that others didn’t have to agree with him, but this was what he believed, and why.

When Des taught a Sabbath School class at Pacific Union College, faculty, students, and community members would usually fill the largest classroom on campus to hear him speak. If anyone arrived late they were lucky to find a place to sit on the floor. No matter the topic of the lesson, his focus was the gospel. The presentations were enlightening and thought-provoking.

He had no problem if our perspective on a topic differed from his. On a walk with Des Ford when he was at Pacific Union College, I recall how we discussed the idea that God did not know everything we were going to do (before Richard Rice’s book, The Openness of God, was ever published). Des did not believe like I did but pointed out some who shared my views. There was no condemnation of my lack of theological knowledge.

Des Ford was not given a Christian hearing by the church at or after Glacier View. He was treated worse by a Christian organization than would probably be permissible by most secular businesses. Perhaps he could have sued the church and won, but he would not and did not do so. I heard him speak a number of times after Glacier View and I don’t recall his criticizing the church. He may have disagreed with their actions, but he remained gentle towards the church.

He did not talk about 1844 until asked to do so. Even then he only did so when he was somewhat assured that it would be safe to talk about that topic. As usual he pointed out that the things he was going to say were what he believed, and explained why he believed as he did. When he shared his perspectives on this controversial topic the college administration panicked, the Pacific Union failed him, and it all ended up in the hands of the General Conference.

Prior to the scheduling of Des Ford’s “trial” at Glacier View, I had been invited to meet with the General Conference auditors there. Coincidentally, the auditors’ meeting was held the week before the “trial.” Toward the end of the week, while I was there, it was interesting—and also sad—to listen to those who had come to be part of the hearings. Those who were there to determine his fate had been provided a copy of Des Ford’s written defense. As they walked around some talked about what they had read. Most of the comments I heard were “I have not read much yet,” “I have read maybe a third or a quarter,” or “I barely had time to look at it.” I did not hear one person say they had read his entire manuscript, yet they were there to judge him on these written materials.

After the Glacier View meeting a vice president from the General Conference spoke at Pacific Union College. In a meeting in Irwin Hall with probably more than 600 people present, I asked if Des Ford’s ministerial credentials had been taken away. This vice president told the audience this had not been determined, or that it had not happened. However, I later learned that prior to that meeting it had in fact already been decided that Ford’s credentials had either been taken away or they were going to be taken away.

I continue to be disappointed with the way Des Ford was treated by the Adventist church. It is my understanding that the church fired him and stripped him of his retirement and other financial benefits that he was entitled to receive. Des Ford served the denomination as a minister for more than 20 years. The Bible, as well as United States human resource laws, would say that he was entitled to what he had earned. One of the reasons that I heard given to justify this was that he was on loan from Australia, and Australian laws would take precedence even though he was working in the United States.

Is the church above the law in how it treats people? Does it look for the easiest, cheapest, and lowest ethical standard that can pass the legal litmus test? It seems to me that a person who has worked long enough for the church to qualify for retirement benefits should receive their earned retirement even if he or she is fired. The church treated Desmond Ford wrongly. He recently passed away and the General Conference cannot make it up to Des Ford—but they should provide retirement benefits to his wife.

It seems to me church administrators slipped to the bottom of the ethical pile in their handling of Des Ford.  They can only hope our great and gracious God in heaven will have more mercy on them than they showed to Des Ford when they treated him so unfairly and cheated him out of his retirement.

My life was deeply blessed by the opportunities I had to hear Des Ford speak, and the conversations I had with him individually.  I believe he could have had a deep impact on bringing others to a rich understanding of the gospel if the church would have treated him fairly, been open-minded to the truth he was preaching, and allowed him to continue to serve the church as an Adventist pastor. 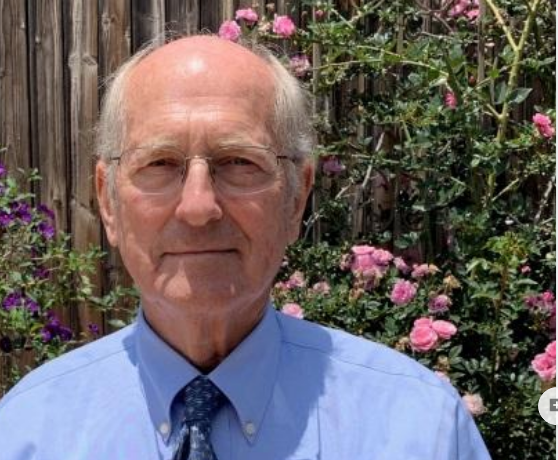 Prior to retirement Richard Voth was Chairman and Professor of Business Administration and Economics at Pacific Union College.  He has an MBA from UCLA and a Ph.D. with specialties in Management and Finance from Arizona State University.  He and his wife, Susan, live in the San Diego, California, area. Although he is retired his community involvement and grandchildren keep him busier than ever.