Holy Week #1: Pontius Pilate and the Illusion of Choice

“In the climax to Charles Dickens’ novel A Tale of Two Cities, Sydney Carton glimpses a chance to do something heroic. He himself is smitten with love for Lucie Manette, but she hopes to marry Charles Darnay; and Darnay is going to the guillotine. ‘It is a far, far better thing that I do now,’ ponders Sydney, ‘than I have ever done.’ He changes places with Charles. Down comes the horrid blade, and Sydney dies a hero.” N.T. Wright, Preaching the Cross in Dark Times, p.30.

When the Jewish leaders send Jesus before Pilate, he didn’t want to decide what to do with Jesus. So Pilate sent Jesus to Herod (Luke 23:7), who also lacks the moral courage to render a just verdict. Herod sends Jesus back to Pilate again where, in John’s more chronological account, Pilate tells the crowd a second time, “He is not guilty of any crime” (John 18:38). Then Pilate repeats himself a third time. “Pilate went outside again and said to the people, ‘I am going to bring him out to you now, but understand clearly that I find him not guilty.’”

But he could not change their minds. And he did not change his, even though he had plenty of chances. Two private audiences with Jesus (John 18:33-34; John 19:9). His wife warning him via letter about her dream of Jesus’ innocence (Matthew 27:19).

Yet all this only emboldened the religious leaders in the crowd, because now they realized that Pilate was willing to compromise. If he would allow an innocent man to be so severely scourged “with a lead-tipped whip” (Matthew 27:26), he would also allow an innocent to be crucified as well.

And they were right.

I wash my hands of it!

But the situation was making Pilate uncomfortable, so he makes one more effort to clear his conscience. Taking a page from the Old Testament, he “washes his hands” of the matter. Deuteronomy describes the ritual like this:

…someone may be found murdered in a field, and you don’t know who committed the murder. …Then the Levitical priests must step forward… They are to decide all legal and criminal cases. The elders of the town must wash their hands over the [sacrificial] heifer … Then they must say, “Our hands did not shed this person’s blood, nor did we see it happen.” Deuteronomy 21:1,5-7

But this is not the same situation! Pilate was trying to use Scripture to justify his injustice and soothe his guilty conscience. Pilate and the religious leaders didn’t find a dead body: they became responsible for one!

As if you can dismiss Jesus and his life and teachings that easily!

But that is an illusion. And sadly, even Pilate realized later that it did not work. The Jewish historian Josephus says Pilate committed suicide five years later (Antiquities xviii.3.2; 4.1,2).

Let His blood be on us!

Matthew 27:25 adds, “And all the people yelled back, “We will take responsibility for his death—we and our children!”

Are there more sobering words in Scripture than these? In the words of Annette Martes, “When they said: ‘Let His blood be on us and on our children’, they chose to be covered in His blood, but not covered by His blood.”

The good news is that the blood of Jesus covers sin. Romans 3:24-26 says

For everyone has sinned; we all fall short of God’s glorious standard. Yet God, in his grace, freely makes us right in his sight. He did this through Christ Jesus when he freed us from the penalty for our sins. For God presented Jesus as the sacrifice for sin. People are made right with God when they believe that Jesus sacrificed his life, shedding his blood. This sacrifice shows that God was being fair when he held back and did not punish those who sinned in times past, for he was looking ahead and including them in what he would do in this present time. God did this to demonstrate his righteousness, for he himself is fair and just, and he makes sinners right in his sight when they believe in Jesus.

Ironically, there was one person there who may have understood what the cross really means: a man named Barabbas. Mark 15:7 tells us that Barabbas was “a revolutionary who had committed murder in an uprising.” Today we would regard Barabbas as a domestic terrorist. Yet “…when the crowd had gathered, Pilate asked them, ‘Which one do you want me to release to you: Jesus Barabbas, or Jesus who is called the Messiah?’” And “Pilate released Barabbas to them…”

David Guzik in a commentary on Matthew 27 says,

We can imagine Barabbas, in a dark prison cell with a small window, waiting to be crucified. Through the window he could hear the crowd gathered before Pilate, not far away from the Fortress Antonia where he was imprisoned. Perhaps he could not hear Pilate ask, “Which of the two do you want me to release to you?” But surely he heard the crowd shout back, “Barabbas.” He probably could not hear Pilate’s one voice ask, “What then shall I do with Jesus who is called Christ?” But he certainly heard the crowd roar in response, “Let Him be crucified.” If all Barabbas heard from his cell was his name shouted by the mob, then the “Let Him be crucified,” when the soldiers came to his cell, he surely thought it was time for him to die a tortured death. But when the soldiers said, “Barabbas, you are a guilty man – but you will be released because Jesus will die in your place,” Barabbas knew the meaning of the cross better than most.”

The Bible does not say if Barabbas accepted the substitutionary atonement offered in his behalf either. But he might have been the only one who understood it.

The question is: Do you?

Interestingly, the New International Version of Matthew 27:17 says Barabbas also went by the name Jesus Barabbas. Since Jesus means “God is salvation” and the name “Barabbas” sounds very much like “son of the father,” together his name meant God is Salvation Son of the Father (Ibid). But this violent son of the father was a false political Messiah and therefore an illusion. Even today, many seem to choose political Messiahs over the Savior. But these people can never save us.

Jesus is the only choice worth making. He conquered not through political alliances and kingdoms of this world or through violence, but through love, trust, and freedom. And His followers, if we really are His followers, will too. Says Peter:

[Jesus] never sinned, nor ever deceived anyone. He did not retaliate when he was insulted, nor threaten revenge when he suffered. He left his case in the hands of God, who always judges fairly. He personally carried our sins in his body on the cross so that we can be dead to sin and live for what is right. By his wounds you are healed. 1 Peter 2:22-24

That’s why it is a far, far better thing to choose Jesus and accept His substitutionary death on the cross for your sin and by His grace, and to live for what is right.

Any other choice is just an illusion. 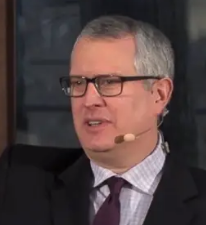 Mike Fortune is the pastor of the Toledo, Ohio Seventh-day Adventist Church. He blogs at Fortune Cookies.