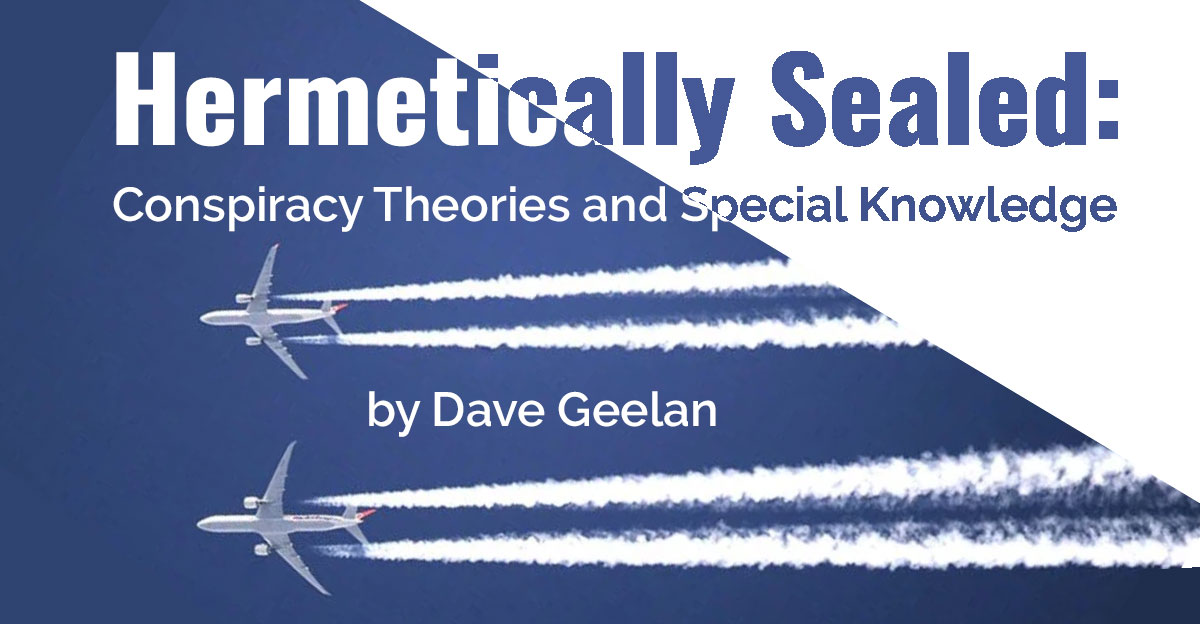 Conspiracy theories and anti-science ideas are remarkably resistant to argument and evidence. There is a range of such ideas, and I will address only a few, but the pattern is consistent in how they are defended. Such ideas include anti-vaccine claims, climate change denial, suspicion of ‘big pharma’ and ideas such as chemtrails. I would argue that recent creationism shares some of the features of this pattern, but perhaps we can leave that topic aside.

The title has a double meaning. A container is said to be hermetically sealed if no gas or liquid can get in or out, but ‘hermetic’ is also a term applied to magical or occult knowledge. The topics I want to discuss bear some resemblance to both senses of the term. Very often, those who reject scientific thinking on a topic do so on the basis that they claim to have some occult, secret knowledge not possessed by most people that changes the meaning of facts and evidence in accordance with their view.

There are patterns of thinking to which none of us are immune, such as ‘confirmation bias’. That is, we are more inclined to notice, accept and believe information that supports our current cherished beliefs than evidence that contradicts them. Partially, this is just an attention effect: you may know what it’s like to buy a new model and colour of car, and then notice that the roads are full of similar ones. Partially, it’s just the human desire to believe that we have chosen the best available position.

It’s really challenging and difficult to actively seek out evidence that challenges or even contradicts a cherished belief. Science has procedures that are designed to allow us to do just that, yet even scientists can cling to harmful beliefs in the face of evidence for a long period.

Loren Seibold’s recent piece in Adventist Today on how Adventists talk about climate change, and my own piece about the evidence and the responses to climate change, along with the ensuing discussions of both, have probably sufficiently explored the ground around that issue, so I’ll leave it for the moment. It’s a crucial issue on which a concerted and well-funded campaign of misinformation has been dismayingly successful, but it shares many commonalities with the issues discussed below. The notion that climate change is a conspiracy by globalists, socialists or the Pope is one example.

Chemtrails are probably a good place to start, partly because they are less consequential in our everyday lives. We see sets of parallel white lines of cloud high in the sky. There are more of them than there used to be. For most of us, they’re the signature of air travel, and we understand that there are far more flights than there used to be. Sometimes they dissipate pretty quickly, sometimes they hang there for hours.

Those trails of cloud are caused when the water vapor that is one of the products of burning jet fuel (kerosene) with oxygen from the air hits the cold atmosphere 10 km (30,000 feet) up where airliners fly, and forms clouds of ice crystals. Winds at that height can vary, but sometimes it can be quite still, with little to disperse the clouds.

For some people, of course, the trails have a much more sinister meaning: a government conspiracy to seed the atmosphere with chemicals. Accounts vary as to whether the chemicals are intended to pacify or sterilise the population, or both, but the rate of population growth and general unrest suggests the program is not especially successful either way.

It would be possible to test the material in the clouds, if a sample were obtained, and establish once and for all what is in them, but a hermetically sealed belief set would mean that its holders would manage to claim that the testing laboratory had been ‘got at’ somehow by the conspirators, and such believers would not trust the findings. The belief is invulnerable, impenetrable to evidence.

The next two topics are linked: general suspicion of ‘big pharma’, and even of modern medicine as a whole, and opposition to vaccines. The claim that vaccines cause autism was bogus, has always been bogus and has been comprehensively debunked with evidence and large scale studies, but it persists. There is a correlation – more autism cases began to be diagnosed around the same time as widespread vaccination took hold – but not causation. The increased diagnoses were due to better diagnosis, not to any link to vaccination. Correlation is not causation.

Vaccines have been an incredible boon to humanity, stopping lethal diseases such as smallpox and polio in their tracks. Anti-vaccination sentiment has the deaths of a number of people in a recent measles outbreak in Samoa on its hands.

Some suspicion of pharmaceutical corporations is also justified, perhaps especially in the United States. Crucial medications such as insulin have had their prices artificially inflated, leading to serious hardship. This is a problem with unregulated robber baron capitalism, though, not a problem with medicines. There are better ways to organise our society and our economy, and we can work toward those, but fatally substituting snake oil for insulin is not a solution.

The same applies to genetically modified organisms, particularly plants used in food crops. While the genetic modifications themselves are shown to be benign in terms of human health effects, there are real issues, including the fact that plants can be genetically modified, for example, to be tolerant to RoundUp (glyphosate) pesticides, but this can mean excessive application of pesticides to fields, with attendant risks to both farm workers and consumers.

It is possible to acknowledge that there are very real associated social, political and economic issues related to our medical, agriculture and other industries, but to continue to accept the findings of science when they have been appropriately developed, tested, peer reviewed and applied. Our lives are enriched by advances in science and technology, and if we have fears in relation to the way our world is developing, they should be rational fears, so that the things we do and the choices we make in response are also rational and productive.

The solution is to actively challenge ourselves. In the research methodology courses I teach, we talk about the active search for ‘discrepant cases’ – examples that don’t fit the general pattern – and for ‘disconfirming evidence’.

It is no accident that the most influential perspective in the philosophy of science is Sir Karl Popper’s ‘falsificationism’. He says that what we’re doing in science is ‘testing our theories to destruction’: throwing every test at them that we can, in order to try to falsify them. Our current best theories are the ones that have so far withstood falsification, but they can at any time be falsified by new evidence, and our job as scientists is to seek that evidence.

Our religious beliefs, too, should be robust and defensible, not scared of questions, but relishing them as opportunities for ‘iron to sharpen iron’. 1 Thessalonians 5:21 says, “Prove (test) all things; hold fast what is good.” Fearing or suppressing challenges, either internally in our own minds in the form of ‘doubts’ or within the various levels of church organisation, is likely to do more harm than good in the longer term.

Note: An earlier version of this article claimed that infertile genetically modified seeds were being used. While a patent exists for ‘Genetic Use Restriction Technology (GURT)’, Monsanto has repeatedly pledged not to put it into production, and there is no evidence that it has been used anywhere in the world. The author regrets this error in the earlier article and has removed the claim.