“Here I Stand”: Is What You Believe in Worth Dying For? 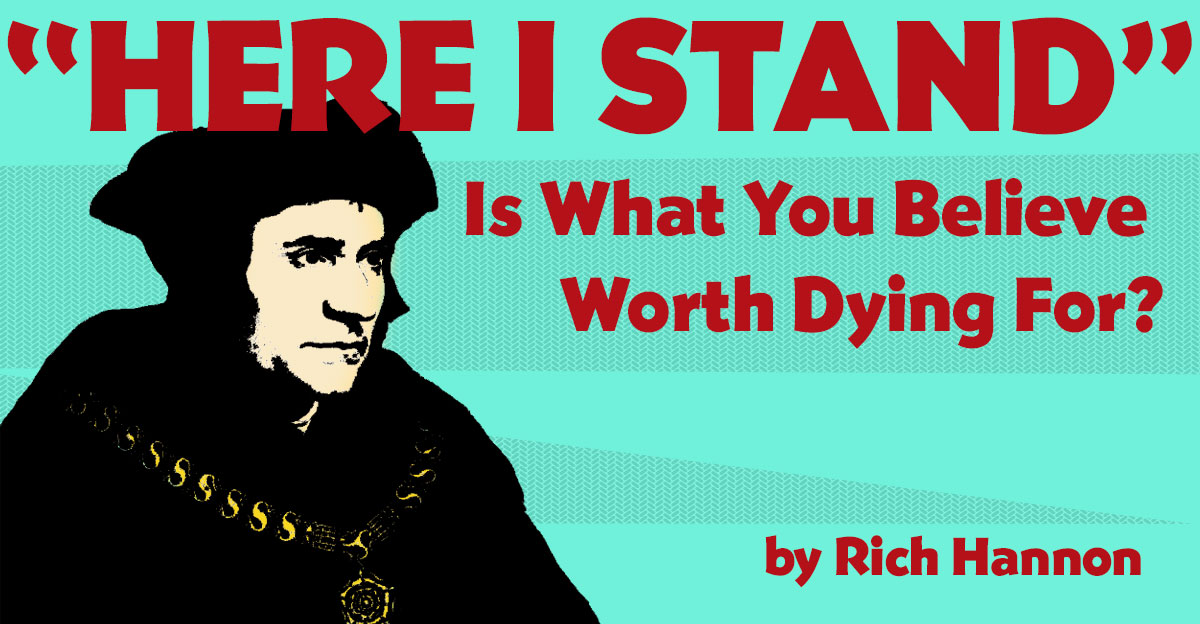 I recently binge-watched the six-part BBC mini-series Wolf Hall, which traces the life of Thomas Cromwell (1485-1540) during his political ascent in the reign of England’s Henry VIII. Henry’s ongoing, overriding problem was in securing a male heir. This caused him to end the marriage to his first wife, Catherine of Aragon, and later execute his second wife, Ann Boleyn. Episode Four focuses on the downfall of Thomas More (1478-1535), when he would not sign a letter asking the pope to annul Henry’s marriage to Catherine. It is historically famous that Henry VIII had six wives and the succession problem dominated his thought and actions. The greatest consequence was Henry’s break with Rome and subsequent founding of the Anglican Church, something that likely never would have happened had Catherine given him a son. And More was a staunch Catholic, so his unwillingness to comply with Henry stemmed from his conviction that Catholicism was right and the pope was the true head of Christendom. This conviction ultimately cost him his life.

This same Thomas More story had been dramatized many years earlier in the play, then movie, A Man for All Seasons (1966). I saw the movie when it first came out (which, of course, dates me) and have watched it multiple times since. A Man for All Seasons portrays More sympathetically, and it was his life-and-death dilemma of conscience that arrested my attention.

Since then I’ve studied More’s life in greater detail and now have a better understanding of his complex character and religious zeal. This, for me, undercut the moral simplicity of the 1966 movie. In contrast, Wolf Hall shows his religiosity with greater historical accuracy. More’s conscientious choice, resulting in his beheading, is still on display, of course, but so too is his willingness to employ Inquisition-style physical torture in attempts to obtain recantations from dissenters.

This is not an essay about Thomas More, or Tudor history and politics. But More’s choice unto death brings up a generic issue for all of us: that of standing for conscience, and whether the reasons one does so are adequately grounded. Protestants, and especially Adventists (given our historical antipathy toward the Catholic Church), would likely find More fatally misguided. Standing for conscience is surely God-honoring, but in this case his conscience is presumably triggered in service of error.

More was certain enough that he chose death. It was, for him, a case of—to reference the famous Martin Luther quote—“Here I stand, I cannot do otherwise.” With Luther, Adventists probably would hold a different view of the premises that drove the final decision. Indeed, the words Luther spoke immediately before the “here I stand” phrase, are his rationale: “I am bound by the Scriptures I have quoted. My conscience is captive to the Word of God. I cannot and I will not retract anything, since it is neither safe nor right to go against conscience.”

So both More and Luther had convictions. And they each had sufficient certainty in the God-correctness of their grounding premises to risk death rather than violate conscience.

So, is standing for conscience because you believe that you know God’s truth always laudable? How about those who died following David Koresh or Jim Jones? It seems to me that before one gets to a “here I stand” conclusion—especially if the consequences of the “stand” are significant—then it’s awfully important to have thoroughly examined the premises on which that stand is based.

Which brings me to Adventism. (You knew we’d get here eventually, right?) The Adventist Church is grounded in a theological and cultural history of being right. But not just being right, but willing to “stand for the right though the heavens fall.” (Ellen G. White, Education, p. 57)  Adventism self-identifies as the “remnant church”: that destination organization into which God, in the Three Angels’ Messages, tells honest seekers to “come out of her my people” and move into our church. And the Adventist eschatology “playbook” expects persecution for God’s faithful followers in the last days, specifically regarding Sabbath observance. A Sunday Law is foreseen and Adventists will have their “here I stand” moment, with life-and-death stakes.

This Remnant Church mindset of being the truth-bearers in the final world drama can have the effect of making leaders and members feel special, ultimate guardians of truth. The psychology of all this can produce resistance to investigating the platform on which one is standing. It doesn’t have to, of course, but emphasis on the importance of our role in God’s wrap-up plans can and does produce leadership exhortation to be faithful to “the truth” at the expense of questioning that collection of truth-positions.

This posture was succinctly exemplified recently by President Ted Wilson’s sermon just prior to the 2021 Annual Council, which you can read and/or watch here. In it he lists 14 points of “aberrant belief” that Adventism has been, and currently is, dealing with. It includes everything that has ever challenged currently accepted Adventist orthodoxy, from age-of-the-earth and evolution, to the investigative judgment and the authority of Ellen White. Wilson collects all these challenges together and demonizes them, calling the collection “faith-destroying,” “absolutely connected with Babylon” and “from the devil.”And his confidence in having a trustworthy truth-platform on which to stand in opposition is expounded in language both strident and extreme.

However intense Wilson is here—and he is a polarizing person, unfortunately —the position he takes is not an outlier when it comes to how Adventist leadership, throughout denominational history, has presented church doctrine.

What will we die for?

So, in all this confidence, where is there room for evaluation of the platform? Wilson et al, seemingly will have nothing to do with such a pursuit. They are too busy “giving the trumpet a certain sound.”

Yet this certainty has, within Adventist history, sometimes proven to be unwarranted. More importantly, such a “take no prisoners” attitude regarding apologetics is unwise even if 100% of current Adventist orthodoxy should prove, post-Second Coming, to be God’s Truth. Openness to the possibility of revision has to remain in the mix because we cannot absolutely know that our present beliefs are error-free. And card-carrying church members, not just potential converts, also need to work through whether Adventist beliefs can pass muster when counter-evidence and arguments are presented.

Institutions have a way of digging into a status quo. But, however intransigent some in leadership might be, each of us as individuals face the same issue. Where should the “here” in “here I stand” – be? And how do we balance God-honoring “standing” with the need for less-than-omniscient people to continually be open to modifying the “here” platform on which we should stand? This shifts the issue from church-centric to one of personal conscience. And, in that arena, the problems of approach and balance are tough enough. Thomas More chose beheading rather than violating his conscience, but I doubt many contemporary Adventists would think his “here” was sufficiently truth-grounded, however admirable his adherence to principle might otherwise be.

We humans too often are resistant to change, as well as attracted to over-simplification. We tend to overestimate our competence and sublimate our fear of being wrong, which leads us to cherry-pick evidence that affirms our current belief structure. But very little in the realm of God-knowledge and how it weaves into our world-view – is binary. It’s not a yes/no, on/off, black/white world. The more we investigate, and thus risk challenging our current convictions, the more grayness we find. This is disconcerting. To evaluate and re-evaluate where we should “stand” is both a lifelong effort and one inevitably producing some measure of frustrating doubt and ambiguity. But the alternative, I would suggest, is worse.

Rich Hannon is a retired software engineer. His long-standing avocations include philosophy, geology and medieval history.