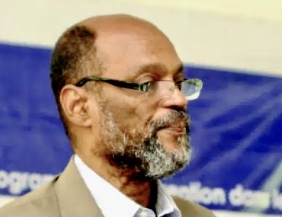 17 September 2021 | Ariel Henry, Haiti’s Prime Minister and the brother of Pastor Élie Henry, president of the Seventh-day Adventist Church in Inter-America, has been banned from leaving Haiti amid an investigation into his alleged connection to the killing of the former president of Haiti, Jovenel Moïse on July 7.

On Monday this week, Ariel Henry, who was raised Adventist, attempted to fire Chief Prosecutor Bed-Ford Claude, accusing him of a “serious administrative offence” after Claude sought charges against Henry.

“Claude appeared to remain in his post as he asked a judge investigating the murder of Mr Moïse to charge the prime minister over his “suspected” involvement in the case,” stated the BBC in a report describing Claude’s actions the next day.

Claude claimed there were links between Henry and a key suspect in the killing of Moïse, Joseph Felix Badio.

Defenders of Henry reject the accusations against him.

“Claude’s request that Henry be charged came three days after the prime minister reached a power-sharing deal with some of the political opposition,” reported The Washington Post.

“Some described Claude’s request for charges, based on two phone calls Henry allegedly had with Badio on July 7, the contents of which prosecutors did not appear to have knowledge of, as a last-ditch effort by Henry’s political rivals to foil that deal,” stated The Washington Post.

“The prosecutor grossly exceeded his mandate,” said Pierre Espérance, executive director of Haiti’s National Human Rights Defense Network to The Washington Post. “This is about a struggle for power for who will rule Haiti. I am not a fan of Ariel Henry, but I cannot support and I must condemn those who would use the judicial system in this way.”

Prior to his political career, Henry worked in France for 19 years as a neurosurgeon before returning to Haiti. Henry served as Haiti’s Minister of Interior and Territorial Communities from 2016 until this year. He is credited with leading Haiti’s response to the deadly cholera epidemic that devastated the country after the 2010 earthquake that left much of Haiti in ruins.

As part of his studies, Henry earned a Masters in Public Health from Loma Linda University in 1989. He served as administrator for the Adventist hospital in Haiti from 1985 to 1987. Henry has also worked for ADRA Haiti in different capacities. He was director of health for the Adventist Church for Haiti, the French West Indies and French Guiana in the late 80s.