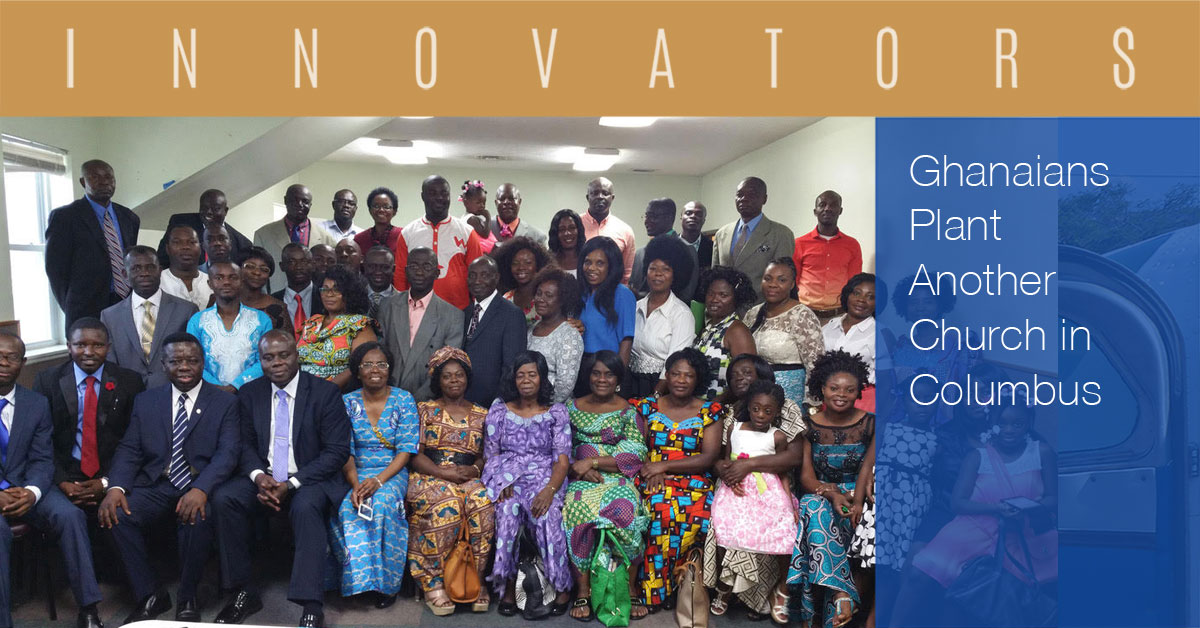 Editor’s Note: I was present at the Ohio Camp Meeting when a group of (as I remember it) perhaps 30 Ghanaian Seventh-day Adventists, after singing some amazing African songs for us, announced their intention of founding a church just for Ghanaians in Columbus, Ohio.

Fast forward perhaps 25 years. ( I chose not to look up facts, or what year that was, because I’m only sharing a personal memory.) This year I agreed to be part of a friendship program for international students at my local college, Berea College. Founded by an abolitionist minister in the 1850s and named after the Bereans in the Bible who checked what the evangelists told them with their own Bibles (a good practice sadly out of use), the college always has hundreds of students from dozens of countries.

The contact person ran up to me and exclaimed, “I have just the student for you; he’s Adventist!”

My student cried with joy when he learned that his “American mother” (his term) was Adventist.

I told him at some point we would find a way to drive the five hours to visit the Ghanaian church which I vaguely knew was flourishing. But when I looked it up, I learned there was also one only 2 1/2 hours away, north of Cincinnati. Obed brought a friend and we visited. For the college students, it was like home. For me it was fascinating.

Quite aside from the fun of trying to sing familiar hymns in Twi from the screen (Twi contains letters our alphabet does not, which makes it interesting) and just listening when the songs were not familiar, I got to watch the 13th Sabbath children’s program, listening to everything being translated to my headphones by a nice young man behind a screen in a back corner. After church, they have a “handshake” ritual in which each and every person shakes the hand of each and every other person there that day. I’m told they do this in other Ghanaian churches as well. And have long, special dedication ceremonies for new choir robes.

They also feed everybody. And treat guests like royalty. In fact, we’re visiting again in a week or so, taking two more (non-Adventist) friends with us.

So I was very interested to learn that the Columbus Ghanaian church was planting another church. I received permission to reprint this account, which was originally published in the Columbia Union Visitor. All photos by Kofi Adjei. DLK

For some time now members of Columbus Ghanaian Seventh-day Adventist have been talking, thinking, brainstorming and praying about planting a second Ghanaian Adventist church within the city of Columbus. They have been convinced that this was long overdue because of the influx of many ethnic non-Adventist Ghanaians who have moved from Ghana, West Africa and settled permanently in different neighborhoods of the city. It was further observed that some of these Ghanaian immigrants who have made Columbus their home may not have known the Adventist message.

After much planning and extensive demographic and psychographic studies, the entire congregation accepted the challenge that 2016 was the year to plant the second church. To facilitate this, senior pastor Sampson K. Twumasi conducted two revival meetings on “Evangeliving’” (living like an evangelist) and family life, to prepare members for the church plant launch and get every family intrinsically involved in the project.

During the months that followed, the church plant taskforce reported to both the church board and the church at large during church business meetings, keeping everyone in the loop. This created excitement among the members and energized everyone to participate in the planting process.

After series of deliberations and seeking the Lord’s directions, the church chose to plant the second church in the northern section of Columbus, which was strategically selected due to its close proximity to so many non-Adventist Ghanaian immigrants. Leaders trained the few Ghanaian Adventists in that vicinity on how to reach fellow Ghanaians. The church also planned to use the core group to refocus on backsliders and nominals, young post-modern professionals, the churched and the unchurched Ghanaians who might be seeking the Adventist truth. 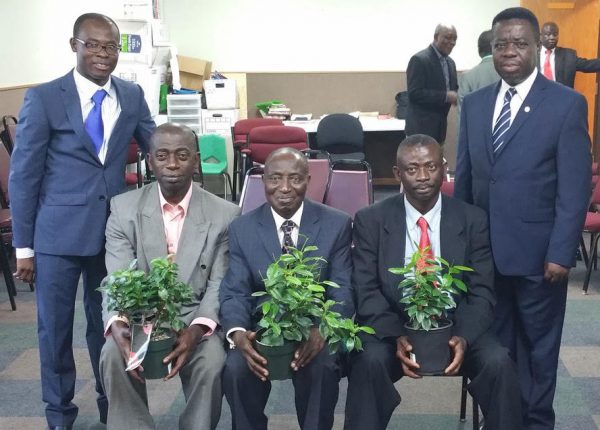 Pastor Derek A. Adu (left) and Pastor Sampson Twumasi (right) present Sampson Nuro, Daniel Boatang, and Joseph Sarkodie, the lay leaders of Prince of Peace Ghanaian Church, with plants to symbolize their nurture and care of the congregation.

A new Ghanaian church was born on August 26, 2016, when a core group from the main church agreed to serve as charter members. Three church elders who had years of experience in church planting in both Ghana and in the U.S. were chosen to nurture the core group.

Though the group is new yet, they have been attracting new members and different ministries are gradually developing among them. Named Prince of Peace Ghanaian church, this group which started with about sixty members now has over eighty members and a baptismal class is preparing candidates for baptism.

Prince of Peace currently meets at 1755 Granville-Dublin Avenue in Columbus, Ohio. The Columbus Ghanaian church, as the mother church, continues to provide assistance until such time as this daughter church can stand on its own and be organized into a company to join the sisterhood of churches within the Ohio Conference. To God be the glory.