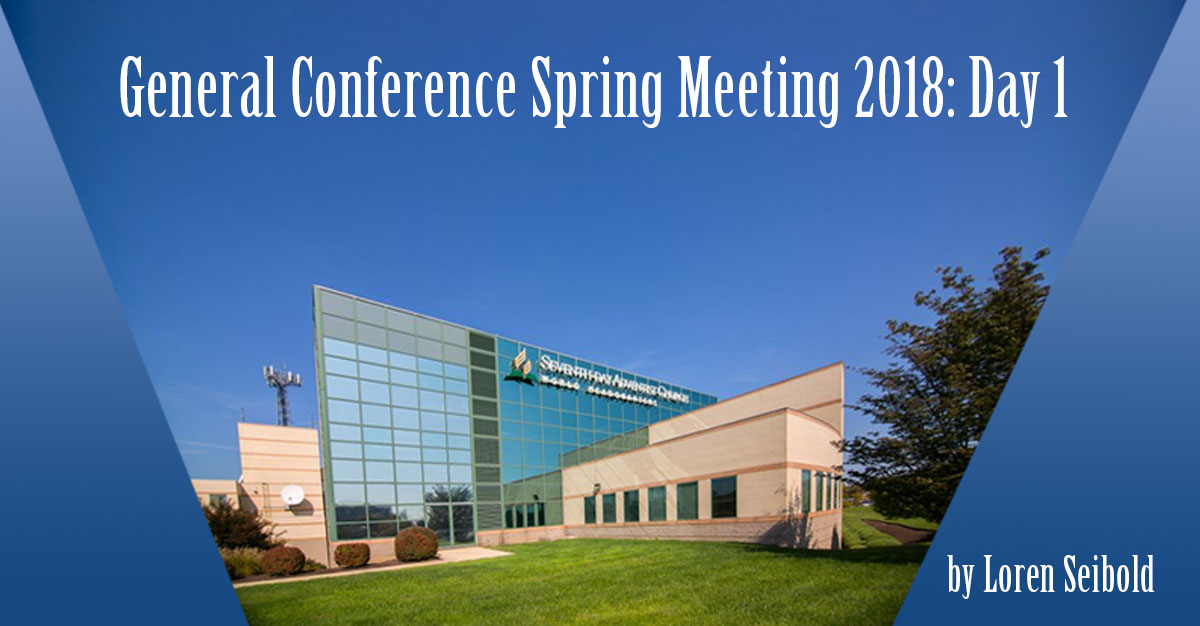 I’m not sure I believe any longer that the church can correct itself by democratic means. At every level, and more so at the General Conference, those who run the church have more power to arrange for their own employment than those who vote.

My expectations for the General Conference Spring Meeting are generally pretty low. It is an annual meeting, but not one that every church administrator in the world comes to as they do to the autumn Annual Council. The spring gathering is called mostly for financial reports, audits, and budgets, which is why it is only two days long, and why it is generally pretty dull and poorly-attended.

Still, I wish every Adventist could, at some time or another, sit in on a business meeting in Silver Spring. On one hand, you understand quickly the whole-worldness of the church, as well as the weight of that responsibility. On the other, you see also how a group of people stuck in one building can become self-referential, and begin to believe that everything they do is important just because they’re doing it.

Mark’s devotional began well. But part way through he decided to take on critics of the church. The church is the bride of Christ, he said: “How would you feel if someone wrote a book criticizing your wife?” He went on to admit that the church has lots of problems, lots of weaknesses. He dwelt on this point. It is “enfeebled and defective,” to quote our prophet. However, it appears that to Mark anyone pointing out precisely how the church is enfeebled and defective is going too far.

I’m not sure quite how to parse that out. Is anyone outside the building allowed to take note of a mistake a denominational leader makes? Or should an organization be counted on to correct itself from the inside? Can it possibly see, from the inside, what others can see from the outside?

I think if one asked Mark, he might say that people just shouldn’t be so mean, so critical. And he’d have a point—if gentle nudges had any effect. Besides, he might say, we we have our chance at the General Conference session to choose the direction the church should be going by whom we vote in or out. But I’m not sure I believe any longer that the church can correct itself by democratic means. At every level, and more so at the General Conference, those who run the church have more power to arrange for their own employment than those who vote.

So it seems to me that the General Conference would be better off to communicate with its critics. To listen, to learn. Of course, they can’t please everyone. But why poison the well, especially when you might be better off taking a drink from it now and then? 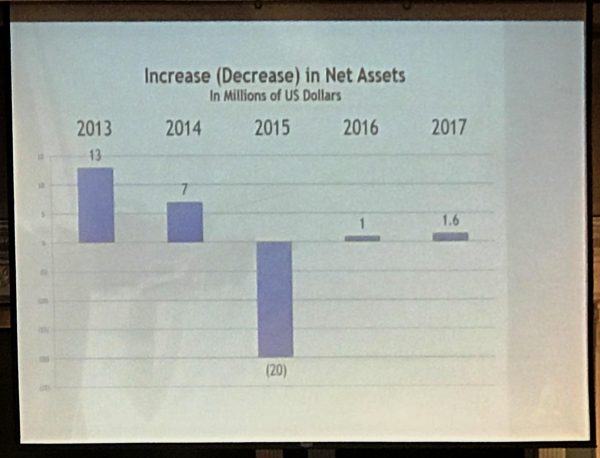 Elder Prestol said that in order to reach a break-even level in our operating, five things are necessary:

Fortunately, “All five came together for a positive report.”

Each year I am interested in Juan Prestol’s emphasis on world financial markets. The monetary exchange markets seem clear: if you’re going to bring Brazilian reals into the country (the second-largest source of tithe in the world, after the U.S.) to run the GC, you hope you can purchase a lot of dollars. Later I asked Elder Prestol about our exposure to the stock market. He said that operating dollars aren’t exposed to stock market fluctuations. Of course, lots of trust funds are—just like many of us have our long-term savings in the stock market. Yet it still leaves me confused (which may have most to do with my lack of understanding about accountancy) why the stock market is such an important factor in operating the GC year by year. 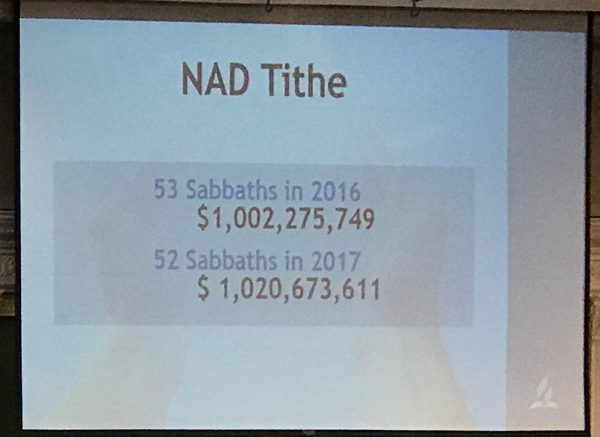 The Review & Herald building has been idle for three years. It was originally appraised to be worth $250K/acre. Now the actual value is $100K/acre—millions less than they counted on.

Although expenses are high in years when there’s a General Conference Session—which made 2015 a tough year, and that probably means the same for 2020—the GC has tightened its belt and lowered expenses in the years in between. For example, they spent only 87% of their travel budget, which is huge. Good work—though the expenses of this institution are still incredibly large.

(Speaking of saving money on administration. Remember a few years ago I told you that the NAD had floated the notion that if they eliminated Conferences in the NAD and ran things from the Union level, they could save $145,000,000 a year? Heard anything about that lately? Neither have I. I wonder if we don’t love our bloated institutions more than we love doing God’s work?)

Here’s what one slide said about donations, which is good news for me, as a church employee: 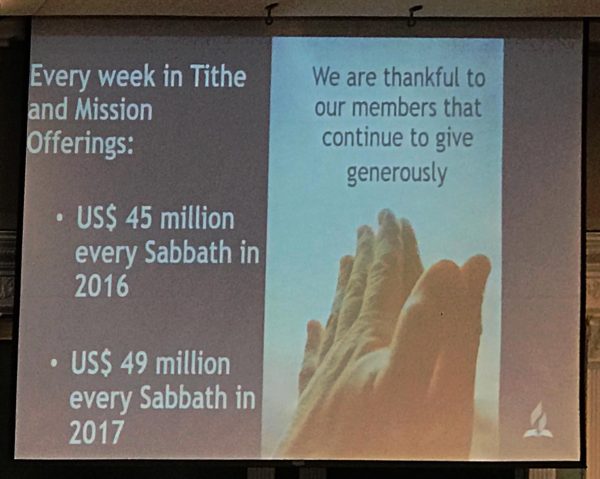 One more thing: someone mentioned that perhaps this increase in giving has to do with the GC’s having funded a full-time stewardship director for every Division. I have my doubts how much another man in an office helps, but stranger things have happened, I suppose. In any case, this funding will continue.

Mission to the Cities: This is an initiative spearheaded to reach one of the least reached cities with a sensitive cultural context, and funded by the GC’s Global Mission funds, GC’s 10/40 window mission offerings, with shared funding from the division, union, and local conference – your mission offerings at work! The goal is to start 50 new congregations in a large metro area of over 10 million people. There are less than 200 Adventist members in four congregations in the city proper, 300 members in the entire region. This is going to cost 5.5 million dollars, with 2.23 million dollars coming from the GC 10/40 window contingency fund.

All Japan 2018 Maranatha: Meetings in 163 sites across Japan in May. Elder Wilson will participate.

Quotes of the day

Elder Juan Prestol: “I realize that this report is boring. But boring is better.”

Family Ministries: There is no more active program in the GC than that led by Willie and Elaine Oliver. They tour, they lecture, they produce materials of all kinds, and they are cranking out new products constantly. And, unlike some that is printed or recorded in this building, their stuff seems to be relevant, well-designed, and accessible. I would attach their entire report and catalog for you, except that a portable scanner that I carried for many years has become obsolete, so I am just going to link you to their website at family.adventist.org. If you’re in need of materials for midweek or weekend study groups, this may be the place to look.

(At this point, my computer quit for about 2 hours; I’m deeply grateful to Ty and Ron of the IT department who helped me fix it! It’s working again now, but I didn’t get to tune in as closely as I would have liked to reports from the Hope Channel and World Missions. Apologies to you, dear readers.)

Dr. Torben Bergland, is going to be an associate in the GC health department, replacing Dr. Fred Hardinge, who is reducing his workload.

Hensley Moorooven becomes undersecretary in G.T. Ng’s department, taking the place of Myron Iseminger who is going to serve in Egypt.

By the time we got to the last report of the day, from the GC Education Department, there were probably a total of 75 people in the room. As I said, Spring Meeting isn’t exciting. Most of the report was pretty standard planning and goal-setting for the future of Adventist education, though I did pick out this interesting bit from the report of Lisa Beardsley Hardy: that there will be an effort to incorporate the resources of the BRI and Geosciences Research Institute in education, to be reflected also in accreditation processes.

The 2018 annual council in October will feature a historical theme with many of the leaders, including Elder Wilson, growing beards and wearing old-fashioned suits; and the women, too, to be dressed in shawls and long dresses. Elder Wilson said the working title is “Looking Back to Look Forward,” which seemed to me as apt a description of where our church is under Elder Wilson’s leadership as any I’ve heard.