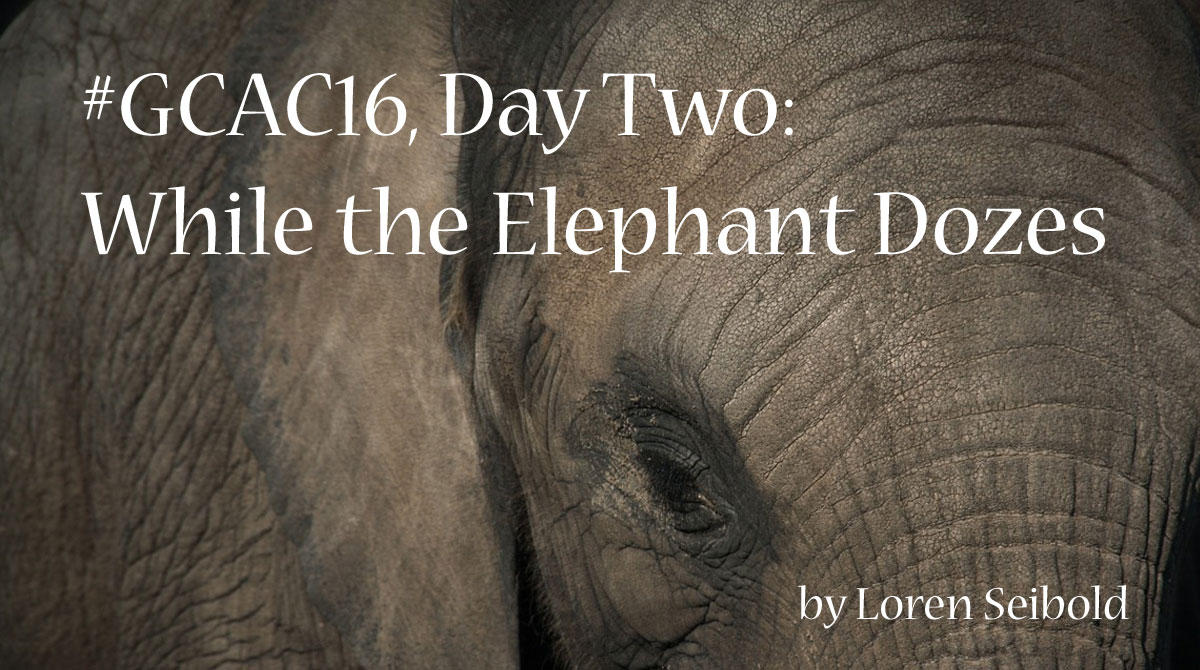 Day Two: There’s a pattern to these long meetings, I’ve noticed. The first day everyone is very attentive. By the second day, there are more people standing in the hall during meetings talking—the technical term is “networking,” though “gossiping” may also apply.

The elephant is still in the room, but dozing. It might awaken with a bellow tomorrow afternoon, when the new unity and conciliation document is discussed—though if tomorrow’s controversial discussion is chaired anything like the way the meeting has been so far, it will be under tight control. Most of the allotted time will be used up by whomever is at the microphone before discussion starts, commenters will be kept on a short leash, and the choices will be limited—no opportunity for a new motion, for example. Letting things get even a little bit out of the chair’s control is something that shan’t be welcome here.

Treasurer’s Report: Today was another round of promotion and reports, interspersed with bits of business. The first was from Juan Rafael Prestol-Puesán, the GC treasurer. The big story here is the effect of a strong dollar. Some of the currencies in countries where there are a lot of us, are devalued when they are sent to the United States. In this past year about $20,000,000 disappeared because of unfavorable currency differential.

I ask this from a position of much ignorance about how it works, but this occurs to me: If some of the money sent to the GC is distributed back to the field again, why bring reais or won or pesos back to a US bank, make it into dollars, only to turn around and reinvest it in the home field? Can’t we do some banking there?

Journey Interrupted is a powerful new film, screened here for the first time, about homosexual Christians. I’m glad to say it isn’t about changing gay people into straight people, a bankrupt idea. But neither is it about accepting one’s homosexuality without judgment. It falls into the “pray, struggle and stay celibate” category. Whether you agree or not, it’s pretty powerful: there is no doubt the people in the film have had an encounter with Christ. The contact info is 360-936-8514, or admin@comingoutministries.org.

Let me remind you that even though our church doesn’t accept homosexual people in relationships as church members, the document prepared last year by a committee of the NAD is far more accepting of homosexual people than I ever thought I’d see in our conservative denomination, and more than you’ll find in most evangelical churches.

Mission Offerings— a discussion about how to revive the institution of the mission offering, which has decreased in relation to tithe and inflation. For the past century mission offerings have been linked to Sabbath School, and Sabbath School isn’t what it once was. I know few congregations that still have a program with mission stories or Mission Spotlight. Fewer people come to Sabbath School. So all missions get is pocket change slipped into a little envelope while we’re studying the Sabbath School lesson—if that.

They’re also up against organizations that show a clearer loop between need and response. ADRA has a catalog where you can buy a needy family a chicken. Maranatha lets you directly contribute to building a specific church, including your labor. I once raised money for a herd of goats for a native tribe in Mexico. It was easy: everyone wanted to buy a cute little goat.

But not everyone can give chickens and goats. Organizations need money for such unsexy things as insurance, utilities and salaries, too.

Reaching Muslims: Petras Bahadur of Adventist-Muslim Relations at the General Conference made an impassioned plea for “the children of Ishmael,” the Muslim people.

Badahur argues that Adventist identity fits well with Muslim beliefs: the sense of being a specially chosen people, not eating pork, following God’s word, being modest and well-behaved, and keeping the Sabbath. At the same time, he says that Christians in general have a dismal reputation in the Muslim world because they haven’t demonstrated much in the way of moral or diet standards. So to reach them, we have to make a distinction between us and other Christians. Which, of course, we tend to do already. He makes the case that as a fellow Abrahamic religion, we worship the same God, and that he can use the Qur’an itself to argue for their accepting Jesus and joining us.

The brethren got a little paranoid about this presentation, I’ve got to say, insisting that no one take pictures or write anything about it, lest it threaten our effort to reach Muslims by revealing our in-family conversations about tactics. As a pastor, I’m sympathetic to showing sensitivity about what you say, though it would have been more convincing were Elder Petras’ stuff not already all over the internet in plainer terms than I’ve described it here.

Tomorrow: More of the same, except for the afternoon session on the unity document. Please remember that technically this isn’t a discussion about women’s ordination, but about the way to deal with union conferences that some here feel are flouting policy, which may include financial and other departures from policy, too. What’s at issue here isn’t just women’s ordination, but church authority. Though it won’t be the same discussion that would have happened about the original, rather punitive document, people are still going to want to talk about why a conciliation process is needed.

At worst, it puts action off for a year. What happens at the end of the year? That’s the question.