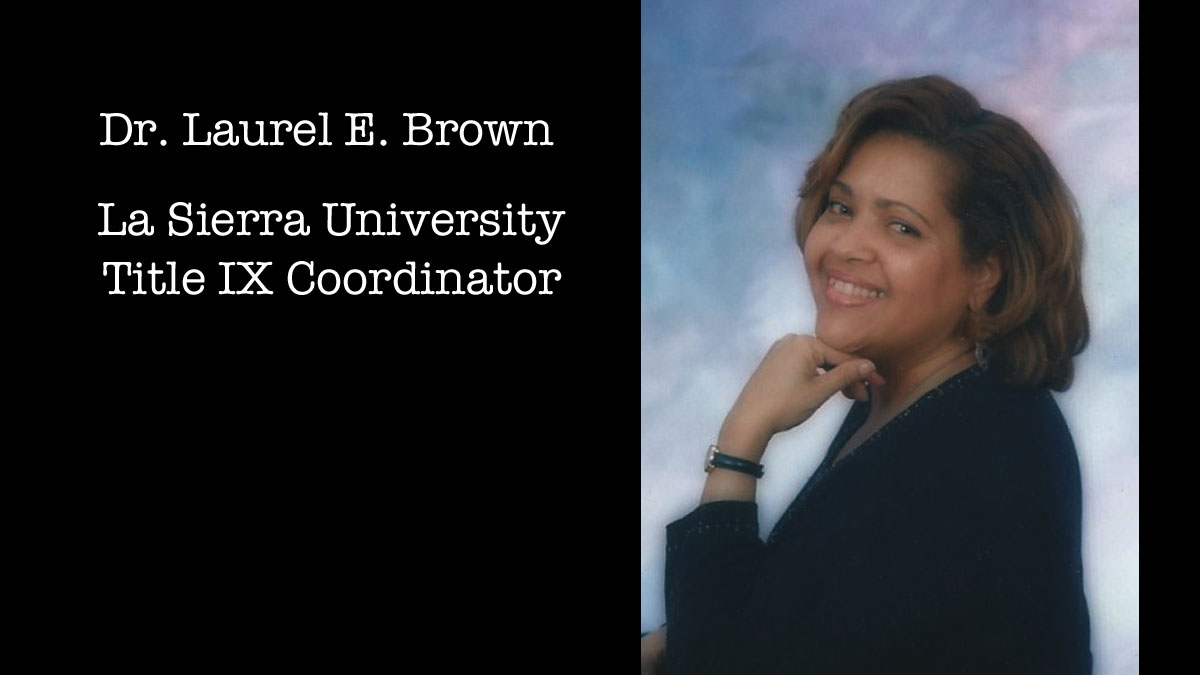 From News Release, August 25, 2016:    Dr. Randal Wisbey, the president of La Sierra University, announced today the hiring of a full-time coordinator for “Title IX,” the national law in the United States that governs discrimination, including on the basis of gender and cases of sexual misconduct. Prior to this the Adventist university located in Riverside, California, had only part-time staff assigned to these issues.

Adventist Today reported earlier this year a demonstration on campus expressing student concerns about the handling of at least one case of alleged rape and a meeting convened by Wisbey to hear the concerns. Since that time an amendment to state law has been discussed in the California legislature which might strip faith-based colleges and universities of any religious exemption in how they deal with lesbian, gay, bisexual and transgender (LGBT) students under Title IX.

Dr. Laurel E. Brown, a Riverside resident, was hired for this role following a national search and interviews with several finalists. The action is a result of Wisbey’s commitment to hire a full-time coordinator in keeping with the university’s continued review and revision of its Title IX policies and procedures.

Brown holds a doctorate in social policy and research from Loma Linda University and a Master of Social Work from the State University of New York, Albany. She is currently an adjunct faculty member at California State University San Bernardino. She has 19 years’ experience in various staff and management positions with the Riverside County Department of Public Social Services, Children’s Services Division, most recently serving as a deputy director overseeing multiple county-wide programs including those for policy and court cases and child protective services. She has worked at a child protective services intake center and command post which operates a 24-hour child abuse hotline and provides immediate response to situations.

As a regional manager with the county’s social services department between 1999 and 2006, Brown was involved in developing and implementing policies and procedures related to changes in child welfare legislation and reforms in federal and state law, and served as a liaison with local law enforcement, schools and mental health providers. She also proposed and implemented one of the first and most successful training units in the department for newly hired social workers.

She served as an adjunct faculty member for La Sierra’s social work program in the 2015-2016 school year. From 2008 to 2011 she served as a full-time faculty member in the Bachelor of Social Work program at California State University San Bernardino and as a faculty field liaison for students placed in public child welfare internships.

Brown’s substantive experience as a senior administrator as well as social work investigator and instructor with knowledge and background in trauma investigations and interviewing equip her well to serve as Title IX coordinator.  In her new role, Brown will also undergo initial and ongoing training with the National Association of College and University Attorneys (NACUA).

“I am excited about the opportunity to strengthen La Sierra University’s commitment to an educational environment free from sex discrimination and sexual violence,” Brown stated. “In many ways I am returning to my roots. I earned my bachelor’s degree at a small liberal arts Christian college on the East Coast. I appreciate the support for whole person growth that a faith-based college provides. It is what I loved about my undergraduate program and it is what I enjoy about La Sierra. I am delighted to be back in a faith-based environment again.”

La Sierra University is committed to fostering an environment in which all members of the campus community are safe and free from sexual misconduct in any form. The Title IX coordinator reports to the university provost and will oversee university compliance with the mandate issued by the U.S. Department of Education Office for Civil Rights that universities and colleges actively prevent “discrimination on the basis of sex in education programs or activities.”

The coordinator’s primary duties include overseeing university responses to all complaints related to Title IX, including coordinating investigators as needed and overseeing investigations; monitoring and identifying opportunities for improvement in the university’s Title IX response, programs and services; regularly reviewing university policies and procedures to ensure compliance with federal, state and local laws and regulations; developing a campus-wide communication program concerning grievance procedures and where complaints may be filed; creating, implementing, and managing annual training programs for all mandatory responsible employees as well as training for new undergraduate and graduate students; collaboration with student groups on educational and other programming/activities and facilitating ongoing university-wide conversations related to Title IX; and assessing the effectiveness of educational efforts.

“La Sierra University is delighted to welcome Dr. Brown to our campus in her new role,” said Wisbey. “She will bring significant expertise and understanding as the university’s Title IX Coordinator. I have assured her that she will have the full support of the university in ensuring the safety of our students, faculty, and staff from sexual discrimination and violence.”

La Sierra University is an Adventist institution of higher education that has won awards for its diversity and commitment to service and outreach both in the city of Riverside and internationally. U.S. News & World Report has repeatedly named it the most diverse university in the western United States. For seven years the Corporation for National and Community Service has given La Sierra the U.S. President’s Higher Education Community Service award, the highest honor a college or university can receive for its commitment to volunteering, service-learning, and civic engagement. The Carnegie Foundation listed La Sierra among the top 119 colleges and universities in the nation for community service.

The Adventist denomination established La Sierra University in 1922 and today it provides more than 120 bachelors, masters and doctoral degree programs with 2,400 students. These include the H.M.S. Richards Divinity School, Zapara School of Business, the School of Education, the College of Arts and Sciences and the Evening Adult Degree Program. A number of educators, physicians, pastors, evangelists and other professionals are among the alumni serving the Adventist mission around the world.

The featured photo with this story is that of Dr. Laurel Brown.