From “Failure to Thrive” to Merck Scholar

Editor’s Introduction: In the three and a half years I’ve been Features Editor here at Adventist Today, I’ve had the privilege of interviewing (almost always by telephone) dozens of fascinating people seeking to follow wherever God leads. Sometimes we can’t get together by phone, so I send a few email questions, write a story from the answers, and then check back to be sure I’ve gotten everything straight.

This is a different story. When I read that Jordan Langston, Oakwood University senior, had received the prestigious UNCF Merck Science Initiative Award, I thought this was a story our readers would like. (Little did I know…!)

I sent him a few questions…and he responded with the following amazing story, so well-written that I am posting it with his own byline. Mr. Langston is a shining example of what a young person who accepts God’s call on his or her life can do, no matter what obstacles must be overcome. We can expect great things of him in the future. DLK 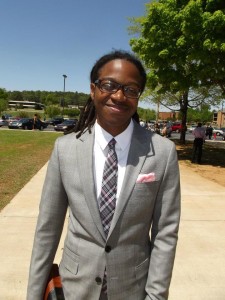 My name is Jordan Langston and I am currently a senior chemistry major at Oakwood University. I was born in Philadelphia, Pennsylvania, but grew up half an hour outside of Philadelphia in a town called King of Prussia, Pennsylvania. I grew up in a Seventh-day Adventist Christian home, in which my parents stressed the importance of a relationship with God. I am an only child and have been blessed to have very attentive parents that have always been in my corner. They nurtured, encouraged and sheltered me and I realize I can never repay such dedication from them on my behalf.

At 12 months of age I became very ill and eventually ended up in kidney failure. From the age of 13 months until the age of 27 months I spent 8-10 hours every night on dialysis. In addition to the kidney failure, I was also listed as “failure to thrive.” The daily prayers by family and friends kept me going, and in March of 1995 I was blessed to receive my first kidney transplant.

My quality of life changed exponentially! God allowed this kidney to work for 16 whole years. I was a senior in high school and just weeks away from needing dialysis when God sent a second kidney transplant, just two weeks before my graduation. Thankfully, I was able to walk with my class for graduation. I am a living witness that God can do the impossible and make you come out as a winner though the devil wants you to think you are a loser.

Since I was a little boy I have been a stutterer, which I have struggled with for some time. This has prevented me from doing tasks involving speaking and I have always spoken in a very low voice for fear of embarrassment. It has taken me a lot of years, but I now realize I should not be afraid to speak. Moses was a stutterer and was able to do important work for the Lord. I now know that if God gives me the words to say, then I should speak them. I was never teased, but I did feel dumb, unintelligent and incapable of doing anything great. However, I know quite differently now.

No matter what setback or issue one may have, it does not stop God from achieving His plan in your life. I realize now, God never calls for perfect people to serve Him; He calls for sinners, who are willing to surrender their lives to Him.

Education was very important to my parents, and they have sacrificed to send me to private school my entire life. It was while a freshman in high school that I came to know that science was my calling…yes, partly because of my own medical history, but it really hit me after reading the book, Rocket Boys and the deal was sealed after reading, Napoleon’s Buttons.

For a long time I felt I wanted to be a clinical pharmacist, but after shadowing one at the Children’s Hospital of Philadelphia during the summer after my freshman year in college, I realized this wasn’t for me. I knew that medicine was my calling.

I have been blessed to have done research the past two summers in Nebraska and in Boston and am quite certain of my love for chemistry and research. The field I am interested in is called “medicinal chemistry.” In short, it is a combination of fields such as chemistry, biology, and pharmacology which produces new drugs. It is field that is highly important in the medical world and were it not for the individuals in this field, new medications would not come on the horizon.

So I desire to pursue an MD/PhD dual degree and become a physician/scientist and work in research but also in the hospital where I would have the opportunity to see patients.

Not only do I want to help heal, but I would like to minister, too. I feel that as a doctor, I would have the privilege of interacting with a myriad of people on a daily basis in the hospital setting. There are so many people in these institutions who are ill and do not know Christ. I believe that people need to know the truth; they need to know that there is Someone who greatly cares for them and their overall wellbeing. It would be such a blessing and honor for me to be used by God in this field to minister to His people.

The Merck/UNCF Scholarship is given to aspiring young African-American scientists, engineers, and mathematicians. I heard about it through my advisor at Oakwood. It is only given to 15 students nationwide who are undergraduates. I had to obtain several letters of recommendation, have a competitive GPA, write a personal statement, and be in pursuit of a graduate degree in the sciences. When I applied for it I never imagined that I would get it. I was not even thinking about it at all after I applied for it. Neither was I praying for such an honor to be bestowed upon me. However, I feel blessed and humbled to have been chosen.

When I received word of having won and being bestowed the honor of being a “Merck Scholar” I realized that despite my rocky medical history and my stuttering, God showed me that I was as bright as anyone else, and that by God’s grace and guidance, I am capable of achieving great things for Him. You just have to be willing to work hard, have a goal you wish to achieve, and most importantly let God order your steps and leave the rest up to Him.