Former Facility of Adventist Media Center in California is Sold 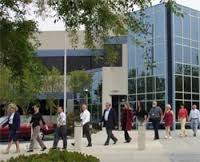 June 7, 2016:    The building where the Adventist Media Center was located from 1995 until last year has been sold, reports the Simi Valley Acorn local newspaper. It sold for 11.5 million dollars in May to a real estate investment partnership named Kids from the Valley XIV, a secular business entity with no connections to the Adventist faith so far as Adventist Today could discover.

The 120,000-square-foot building is located on seven acres at 101 West Cochran Street and includes two floors of offices and two sound stages for television or film production as well as editing suites and storage space. It was sold with “all of the equipment, lighting, green screens, dressing rooms, mixing boards, etc., so the buyer is already booking the space for production,” the newspaper quoted a real estate agent involved in the sale.

The facility will be operated by Anjac Studios West, contracting with production companies, film and recording producers who will lease the facilities for short and long-term media projects. The investors also own the Orpheum Theater in Los Angeles and “the Simi Valley has a long history with the entertainment industry,” stated Brian Gabler, economic development director for the municipal government. In addition, up to 90,000 square feet of office space will be leased out, the newspaper reported.

The Adventist Media Center was created in 1972 in Thousand Oaks, another suburban town nearby, and brought together Adventist radio and televisions ministries from across North America. There was tension over the concept of a centralized operation from the beginning and the original campus generated too much overhead cost, so the center moved into a single building in Simi Valley in 1995.

By 2015 it was no longer a General Conference institution and had become an agency of the denomination’s North American Division (NAD). After careful study, the NAD decided to allow the ministries to move to various separate locations around the United States and Canada. By that time Adventist media centers had been established in many places around the world, including the Hope Channel studios at the General Conference office in Silver Spring, Maryland.

There has been a growing market for video productions related to the Adventist faith due to a multiplication of satellite networks serving local cable systems and homes, distribution via the Internet and the number of Adventist local churches that have installed satellite down-links and playback equipment since the 1990s. Audio production has also grown with the development of Adventist World Radio and new methods of Internet distribution. The concept of one center meeting the production needs of the global Adventist movement became outdated along the way.