Here is something special for Trinity Sunday…

Once upon a time, there was a nice little planet called Flataxia. Everything and everybody was flat. You see, Flataxia was a two-dimensional world. They had length and breadth, but no depth. Just a lot of flat little people sliding around in their flat little houses, or going out in their flat cars and slipping along their flat roads. They were all very happy with their flat little lives.

Then one day an amazing, astonishing, inconceivable thing happened. A Flataxian prophet came along, who claimed to come from a three-dimensional world. Most Flataxians knew such a thing was completely impossible, and ignored, or even ridiculed the prophet.

“That’s nonsense!” exclaimed one old Flataxian elder. “I know your parents—perfectly respectable Flataxians, both of them. And I saw you when you were just a little baby, as flat and perfect as could be! You should slide on over to the beach and lie beside the sheet of water for a while.”

“That’s impossible!” said the Flataxians. “The Great Being is One!”

The prophet nodded. “Yes. That’s what I said.”

“That is not what you said! We just don’t get it!”

So the prophet tried to explain. He slid around the landscape, telling stories, doing miraculous healings, and insisting on this odd place where there was something called “depth.” It was really hard even for him to explain. “You know what a square is, right?”

“Of course, do we look stupid?”

“I didn’t say that. Now, try to imagine a whole bunch of squares stacked on top of each other. That’s a cube.”

“What is ‘on top of’?” asked the Flataxians, slithering their hands sideways to scratch their flat little heads.

“Well… then imagine six squares folded up together, kind of like…just try to trust me! There is such a thing as a cube! And it has length, breadth, and depth!”

Over time, some people came to believe the prophet, so that when he went back to his three-dimensional world, promising to come and take them to live on his planet one day, there were many believers in the three dimensions.

Right away, they started flat little churches where they discussed this concept, and sang about it (a little flat), and played on their flat little instruments about it. Almost as soon as they began, they started arguing. Some insisted that the Three-Dimensional Cube looked like this:

They called it The Church of the Straight Truth. 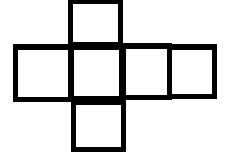 They named theirs The Church of the Folded Cube.

And of course there were die-hards who would stake their lives on the absolute fact that it looked like this:

They designated themselves The Church of the One True Cube. “It’s exactly like a square,” they would pontificate, “only deeper.” This was not much help, since no one knew what “deeper” meant, but by now, it was terribly important not to admit what you didn’t know. You had to spend your life clinging buckle and thong to what you knew for certain.

And I suppose all the Flataxians are there still, arguing in their little flat (square) churches and explaining to each other what they know for certain.

“God is One. Anything else is polytheism!”

“There is one God, Jesus is His Son, and they have a spirit of truth and love.”

“The Father, Son, and Spirit are three emanations of just one Being.”

“There is a big throne in heaven, where Jesus and the Father sit side-by-side. The Spirit flows from them.”

“No, the Spirit comes direct from God only.”

“No, Jesus said He would send the Spirit!”

“The Spirit is a knowing Being.”

“The Spirit is a woman.”

Here is actually the only thing I know for certain: There is a God. That God is Love. That God is One. Somehow or other.

I am indebted to C. S. Lewis for the idea, which he used in his book Mere Christianity. For the record, all he said was that it’s as hard for us to conceive of a three-personality person as it would be for people on a two-dimensional world to conceive of three dimensions. But I like to think Dr. Lewis would have enjoyed the lengths to which I take it!