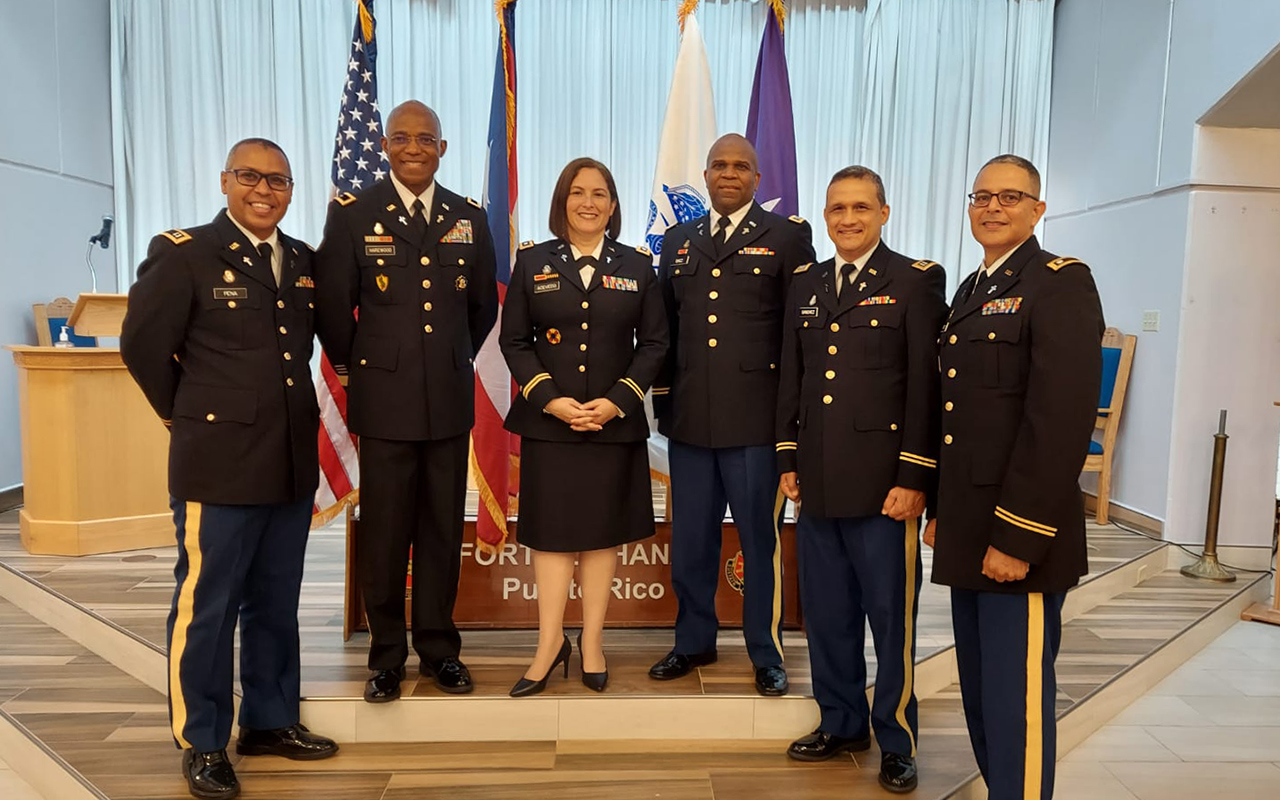 10 September 2021 | Wanda Acevedo became the first Seventh-day Adventist woman to be promoted to lieutenant colonel in the United States Army Reserve during a special ceremony at Fort Buchanan, Puerto Rico, on April 28, 2021. With this rank, Acevedo becomes the deputy command chaplain overseeing all religious support and chaplaincy teams that serve more than 5,000 soldiers at the base.

Acevedo accepted the position by taking the oath of office administered by Chaplain (Brigadier General) Andrew R. Harewood of the U.S. Army Reserve. Harewood, who is the third Seventh-day Adventist to reach the rank of general in the U.S. Army Reserve, offered a prayer of dedication as he hosted the promotion ceremony during a unit ministry team annual training assignment on the base.

“Lieutenant Colonel Wanda Acevedo is very gifted. I believe in her and know she’s going to go further,” said Harewood.

“God is so good,” Acevedo said, as the ground-breaking nature of her promotion continued to sink in. Acevedo hadn’t planned to be the first female Seventh-day Adventist chaplain promoted to this rank, but she is pleased to set a precedent with this historic achievement. “It’s trail blazing for other Seventh-day Adventist women chaplains that are out there or for [female] students who may not know that there are many different ministry opportunities in the military,” said Acevedo. “God has proven that we are needed here.”

In 2001, Acevedo became the first Seventh-day Adventist woman to enter any military chaplaincy program in the United States Army. “This is a ministry that needs more [female] chaplains to bring balance in perspective styles and all [the] uniqueness that each one can bring to the table.”

According to Paul Anderson, director of Adventist Chaplaincy Ministries for the North American Division, there are currently only six women chaplains throughout all the branches in the U.S. military.

Acevedo emphasized the unique needs chaplain service is designed to meet. At the end of the day, it’s about reaching out to people where they are, speaking their language, understanding their particular needs, and bringing God to them, she said.

As deputy command chaplain, Acevedo now leads 27 chaplain unit ministry teams in Fort Buchanan. Among them, there are six Seventh-day Adventists, including her immediate supervisor and four others in the team.

Her new leadership role reminds her of the biblical stories of Joseph, Esther, and Daniel, who each had a special purpose and ministry in a foreign government. “They had to learn the ways of the secular system to be able to testify of the real God and to be able to influence the processes of those systems,” said Acevedo. “That’s how I see us as Seventh-day Adventists here. We have the uniform, we learn the system — this military worldview, where we bring God to them. [We can be] a positive influence in the system, in the decision-making process.”

One way she serves is by advising commanders, interacting and conversing with them in a way that serves as a witness, the way Daniel influenced political leaders of Babylon, like Esther as she influenced the king of Persia, and as Joseph influenced Pharaoh in Egypt.

“This is a ministry, not in the same way or sense of an evangelistic campaign in the traditional setting; that’s not our plan. Our purpose is more in the perspective of a ministry of influence, leading by example, testifying, helping others, forming future leaders, and advising commanders. It’s a very unique type of ministry,” she added.

A native of Puerto Rico, Acevedo has always felt passionate about ministering to others.

“I was born into the Church and started preaching at 12 years old, then became youth director at my church in Cataño in east Puerto Rico, took part in Pathfinder club and master guide clubs, became a Bible worker, and felt a calling to study theology,” she said. After she graduated from Antillean Adventist University in Mayaguez, Puerto Rico, she worked as a chaplain in several Adventist schools in the East Puerto Rico Conference and soon received an invitation to a chaplaincy recruiting meeting. “I felt like God brought me to that meeting,” she said. “I was so impressed with all the things you could do as a military chaplain. If God puts it in your heart you have to follow it.”

Prior to her military service, Acevedo worked two years as an adjunct theology professor at Antillean Adventist University in Mayaguez, Puerto Rico, and served as a chaplain at the Adventist-run Bella Vista Hospital in Mayaguez. She also taught several classes at the Inter-American Adventist Theological Seminary.