Finding Jesus in the Book of Revelation, by Steve Case & Daniel Wysong

Seventh-day Adventist commentaries on Revelation that emphasize the KJV, endorse historicism, condemn Catholicism, limit the Sabbath to the seal of God, Adventism as the remnant church and Ellen White as the Spirit of Prophecy already exist. So the authors of this book focus on what those kinds of commentaries miss: namely the Old Testament roots upon which Revelation is based and how those roots reveal Jesus within the pages of Revelation. 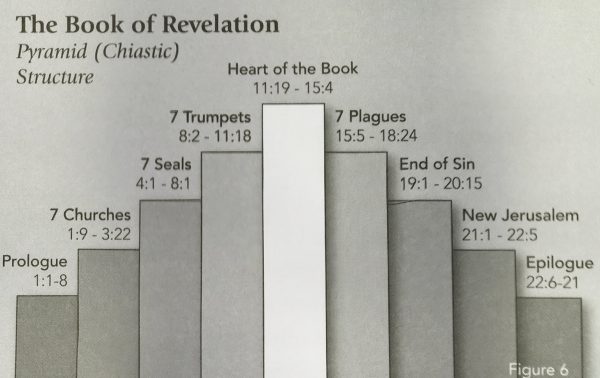 Finding Jesus in the Book of Revelation begins by explaining that Westerners read Revelation wrong. Revelation is read linearly and too often literally, though it was written to be read with a pyramid structure in mind. The pyramid displays in a convincing manner the prologue, churches, seals, trumpets on the left side that most directly affect the followers of Jesus while the parallel plagues, end of sin, new Jerusalem and epilogue tell in greater detail the covenant curses and consequences those who dwell on the earth experience should they reject the heart of the book: Jesus. Using that illustration as a guide, the authors take the reader on a scholarly but surprisingly easy-to-read journey through the pages of Revelation.

Jesus clearly appears among the churches. But the authors help the reader see that by using a sanctuary scene from the Old Testament for each subsequent section of the pyramid, Jesus also appears amid the seven seals (“Take heaven’s perspective and follow the Lamb instead of the world”), trumpets (“Jesus warns and calls for a lifestyle of repentance and prayer”), even the plagues (Jesus remains trustworthy. Babylon loses, and it loses everything).

Two chapters of the commentary are devoted to explaining Jesus in the heart of the book of Revelation, from 11:19-15:4. Revelation 12 and 13 describe “A battle between Christ and Satan started in heaven and moved to earth. Satan utilizes a false trinity to deceive and coerce.” But God responds with the three angel’s messages of Revelation 14 where “Worship of the True Trinity requires an enduring trust in Jesus.”

One weakness of the commentary, which may have more to do with the genre of literature it is attempting to explain, is its inability to clearly decipher what is literal and what is symbolic. “Before we start looking for literal hailstorms and forest fires, the genre of Revelation reminds us to expect Revelation to be symbolic. And what was literal in the Old Testament becomes symbolic in the New Testament because of Jesus. What was local becomes global.” This leaves the reader much clearer about how Jesus is present through the eras of Revelation between the cross and second coming, but still a little unclear about how much of Revelation is literal or symbolic. The reader is left wondering why the end of sin and the New Jerusalem are literal, but the devastating plagues and covenant curses upon which the plagues are based are not? The authors do a much better job explaining the Old Testament symbolism than the actual application of those symbols in the Christian era. But maybe, since much of what the second half of Revelation covers has not yet occurred, readers should humbly follow their lead and concede we only know in part (cf. 1 Corinthians 13:12).

One example of the scholarly strength of this commentary can be found in helping us to understand the troublesome phrase from Revelation 20:10, “They will be tormented day and night forever and ever.” The authors say “Understanding this passage hinges on the word basanizo translated in many Bibles as torment. But torment isn’t the first meaning of basanizo. Originally the word meant touchstone used to test metal to find what it was made of. It exposed the fake.” The authors conclude, “Some find it tempting to use a threat of God torturing people forever as a motivation to get people to behave. But we have already seen that the beast uses coercion and force, not God. In the context of God’s justice and judgment, it would be far more consistent to use the primary meaning of basanizo—exposing something for what it really is.” So Revelation 20:10 can be read, “They will be tested and exposed for what they really are day and night forever and ever.”

Finding Jesus in the Book of Revelation is a uniquely Christocentric and grace based commentary that builds on previous scholarship without contradicting it. “The only way God’s people make it to heaven is the way they continue on earth—by relying on the grace of Jesus.” I highly recommend it, and hope evangelists adopt its scholarly but humble presentation style.

Mike Fortune is the pastor of the Toledo, Ohio Seventh-day Adventist Church. He blogs at Fortune Cookies.