I don’t know if I would have reviewed the recent Netflix streaming release, Dick Johnson Is Dead, but, after learning that the filmmaker, Kirsten Johnson, was raised as a Seventh-day Adventist, that lent a certain pertinence, and, after reading multiple online reviews, I decided to view it.

You can view a trailer here.

Ms. Johnson has been associated with multiple (close to 70) documentary films and is perhaps best known for Cameraperson, a 2016 release documenting her oeuvre. She has directed six films herself.

Upon learning, in 2017, of her father’s slowly progressive dementia, Ms. Johnson decided to document the winter of his years in an unusual, creative manner, staging his mock death in multiple ways at various times. It is a simultaneous visual love letter and exploration of human mortality.

Spoiler alert: Dick Johnson is still alive, but has moved to Bethesda, MD, to a care facility near his son, after relocating from Seattle, where he had a psychiatry practice, to New York City, where his daughter lives.

I have had two family members with dementia: a brother-in-law and a sister-in-law.  Perhaps with some irony, they both lived in the same care facility before their passage from life.

There are at least two sources of sadness associated with dementia (one could try to be more specific, but it is not particularly productive, as all forms are, currently, incurable): one is the witness in loved ones of the inexorable decline of mental faculties. At one time, all cylinders were firing. A once 100-watt bulb with time grows dim, then ceases to give light.

The other is, somewhat like but also unlike COVID-19, the inability to say proper goodbyes. The loss of short-term memory progresses to lack of recognition. The afflicted becomes a figurative shell of their former self and it is difficult for family to discern their level of cognition.

“Old soldiers never die; they just fade away,” said General Douglas MacArthur in a 1951 farewell speech to Congress. Unlike soldiers, patients with dementia do die – after first fading away.

Dick Johnson Is Dead was well received. It received a 100% rating by critics and over 80% rating of viewers at Rotten Tomatoes and a 3.5/4 rating at Roger Ebert. The majority of reviews I encountered were favorable. 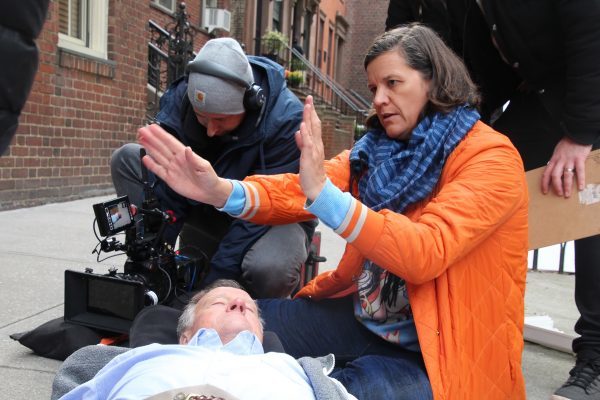 This was not Ms. Johnson’s first personal encounter with dementia. Her mother passed in 2007 and suffered dementia in her final years. The auteur was determined to visually record her father more than she had her mother.

The sweetness of Richard C. Johnson, MD is almost palpable. He never displays anger. One could hardly wish for a nicer person.  It is clear he loves his daughter – and she him. Dick seems content that, in his mind, he has already experienced heaven – on earth, in the form of family.

I will avoid more spoiler alerts. Suffice it to say I was reminded of 1 Peter 4:8, which says: “Love covereth a multitude of sins.”

I am not sure Ms. Johnson got the celestial scenes just right. But then again, I’m not sure she didn’t. There are some things we don’t know. Some of us may be fortunate enough to learn someday.

The love between father and daughter, as well as between others, including on set, transcends those things that may drive a wedge between members of a common community.

The Master distilled the Decalogue into two great precepts. Both of them involved love.

I realize this to be a cliché, but I believe that what binds us is greater than that which divides. One would certainly believe that after viewing this film.

All die, but not all live.

This film is an affirmation of life and teaches some of us how to best live.

Winston Groom, writer and creator of the character Forrest Gump, passed recently. Forrest Gump remarked life is like a box of chocolates: you never know what you’re going to get.

After viewing this film, chocolate cake may carry a special meaning to some.

So long as we have breath, we have life. The current pandemic is a vivid reminder of that.

More than anything, this visual paean was suffused with kindness. Between father and daughter. Between friends. Between strangers.

I was reminded of this by Aesop (of fable fame): “No act of kindness, no matter how small, is ever wasted.”

To be reminded of that may be sufficient reason alone to view this offering.