A Quiet Passion: A Film about Emily Dickinson 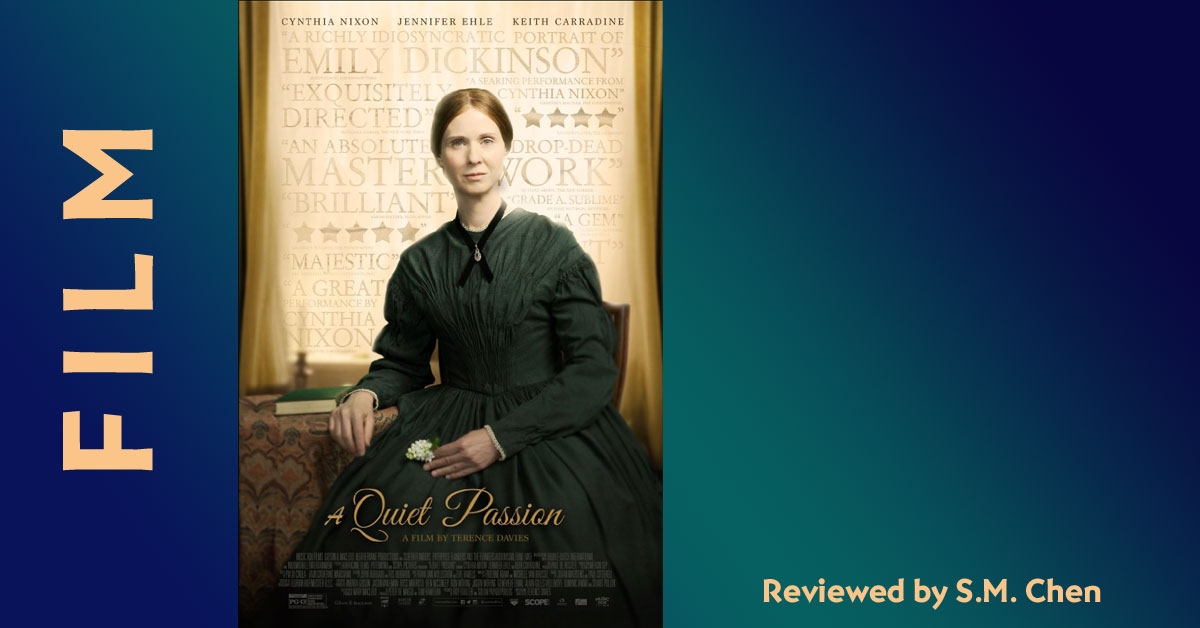 One of my favorite poets from high school was Emily Dickinson. She was a New Englander, born, raised, and living her entire life not far from my home and school. Being a New Englander myself, it was natural to be partial to one’s own. As Sir Thomas Browne (English writer, physician, theologian) commented in 1624, “Charity begins at home.

For another, I can relate to her Puritanical upbringing. It was not that different from my own. Perhaps despite attempts to suppress it, I think some of her poetry is tinged with it. Try as we might, we cannot quite shake our past.

She was also often subtle. When asked her opinion of H. W. Longfellow, a popular poet of her time, she sniffed, “He’s so obvious.” Her poetry, on the other hand, was not. In my opinion, some of the best poetry is not.

One need not love poetry to appreciate Terence Davies’ biopic of Emily Dickinson, “A Quiet Passion” (2017), but it won’t hurt. Actress Cynthia Nixon, perhaps better known for other roles, nicely captures the essence of Dickinson – her independence, intelligence and, perhaps most of all, her integrity

Her plain face is reminiscent of that of the unnamed housewife in Grant Wood’s classic painting, “American Gothic.” One difference was that there was no farmer (with pitchfork) in the life of Dickinson. Though lacking in physical comeliness, that which lay beneath the surface was (at least to some) comely indeed. We can be grateful that the eye of the Almighty is not limited by integument.

I found the film dialogue wonderful in its simplicity and directness. Her spirituality – or, some might say, lack of same – stood in marked contrast to that of the more conventionally pious (including her father, in whose house she lived virtually her entire adult life). Yet her life, as portrayed in the film, was one of rectitude and above reproach.

I appreciated the incorporation by the auteur (who wrote and directed) of some of the poet’s memorable lines into the film, a refreshing contrast to so much contemporary fare. This film lacks violence, coarse language, sexuality, and any pretense of pyrotechnics. Often more is implied than shown. In fact, not a lot happens. It is a tribute to the film that it holds interest, if not fascination, in the absence of such sensory stimuli. The cinematography is simple, spare, and appropriate. It is also lovely.

This movie is not for everyone. I suspect it will not do well commercially. However, it has won (deservedly, in my opinion) critical acclaim and may remain in memory long after viewing. The nature to which it appeals is a higher one, one we may do well to nurture.

The life of Dickinson reminds somewhat of the life of another New Englander, Henry David Thoreau, who, upon his deathbed in his 40s, was asked by a local parson if he had made peace with his Maker. “I wasn’t aware we had quarreled,” said he, somewhat prickly to the end.

Dickinson’s end was not thus recorded, but I think it could have been. It is difficult to believe that her simple, yet profound poetry came from any place other than one we associate with all things good. It is said she wondered less about the existence of the Almighty than His intentions, about which she spent her life in inquiry.

Individuals like Dickinson, who are blessed with a particular gift, remind us how richly varied is the humanity molded by the hand of divinity. Regardless whether she will find herself composing poetry on the sea of glass, I feel quite sure there will be others of her ilk, with similar perception, sensitivity and sensibility, who walk that sea without fear of falling. And somewhere above and beyond all this I imagine there may be a smile on the face of the Almighty, who, once again, will declare all things good.

As I contemplate her life, I am reminded of the lines of another poet, Brit Gerard Manley Hopkins, who wrote, in “Pied Beauty”:

“Glory be to God for dappled things –

For skies of couple-colour as a brinded cow;
For rose-moles all in stipple upon trout that swim;
Fresh-firecoal chestnut-falls; finches’ wings;
Landscape plotted and pieced – fold, fallow and plough;
And all trades, their gear and tackle and trim.

All things counter, original, spare, strange;
Whatever is fickle, freckled (who knows how?);
With swift, slow; sweet, sour; adazzle, dim;
He fathers-forth who beauty is past change:
Praise Him.”

Dickinson might well have read these lines of Shakespeare (Polonius speaking, in “Hamlet”): “This above all, to thine own self be true, and it must follow, as the night the day, thou canst not then be false to any man.”  Or woman.

If nothing else, Dickinson was true to herself. She lived a life as a relative recluse, never married, and, often during the wee hours of the quiet night, churned out some of the finest poetry we’ve been privileged to read.

I think she would be pleased to know how many lives she has affected and to which she has brought delight.

Like many artists, she did not seek fame (or fortune) during life, and did not achieve such. Her recognition came mostly after passage from life.

One wonders how many more like her there have been, or may be. I suspect more than we imagine. We may only someday know.

Prolific, she composed over 1700 poems. Whether you view the film or not, you may find a few that speak to you, that came from the pen of one with a quiet passion.