Feminism Is Good for the Church and the World

I’ve often asked myself what made me what I am.

As a Finn, I am totally atypical: a housewife and mother, wife of a pastor, I have not worked for most of my life, or engaged in volunteer activities. Actually, I have repeated my mother’s life pattern, although I never wanted to do so. I passionately support gender equality, and yet that does not show in my lifestyle. I am convinced that men and women should share all work, including in the household, and yet I have not done so in my family. We had agreed on the traditional family pattern. The influence of Ellen G. White certainly also contributed to this, because she was for me like a benevolent great-aunt who gave advice.

I grew up in a family dedicated to serving God in the Seventh-day Adventist Church. My dad worked for the church, and it was natural for us children that we wanted to do that, too. From an early age I sat with foreign guests, leading brothers of the church, at the table when they visited us. Their names and faces were familiar to me, and I followed the development of my worldwide community with interest. Today we have the best tools for this through the modern media, and so I follow with great interest everything that is going on in the church. I cannot imagine my life without the church. I never wanted to be a pastor, but I gave my life to the service of God and his church. I would probably have ended up in politics if my priority had not been the church.

Finnish women have been equal for a long time. Finland became the first country in Europe in 1906 to enact legislation that allowed women to vote and be elected. Already in the parliamentary election in 1907 they won almost ten percent of the seats. Parity was almost realized in the 2019 election, with 47 percent of MPs now being women. Finland’s women got the same inheritance rights as men in the 19th century, and were allowed to operate in business. In 1927, there was a woman in the government for the first time, and from 2000 to 2012, a woman held the highest office in the state, that of the president of the republic. Since 1988, women’s ordination has been practiced in the Lutheran church. The current president, Sauli Niinistö, is one of the pioneers of the #heforshe movement of UN WOMEN. He is proud to be a feminist.

Why do so many people have the idea that feminism is a dirty word that a Christian should not utter? Feminism advocates equal rights, human dignity and self-determination of all people of all sexes, as well as standing against sexism. Hillary Clinton said in Beijing on September 5, 1995, “Women’s rights are human rights, and human rights are women’s rights.” This is also true in churches.

In Finland, all ninth-grade students received in 2017 a free copy of More Feminism: A Manifesto and Four Stories by Nigerian author Chimamanda Ngozi Adichie. The Ministry of Culture and Education supported the distribution. It’s basically just the written version of Chimamanda’s TED speech, which can also be viewed on Youtube. Chimamanda was warned against calling herself a feminist because, people said, feminists are unhappy women who have not got a husband. So Chimamanda called herself a happy feminist and was told that feminism did not fit into the African culture, so she called herself a happy African feminist. She continued to reply to this series of objections until she declared herself a happy African Feminist, who does not hate men and who likes to wear lip gloss and high heels because she likes to do it—and does not do that for men.

That the word “feminist” has become a dirty word is due to a misinterpretation and association with angry women who hate men. Most people would say they are not feminists. But if you ask them if they support the equality of all people, they would clearly agree. Of course they support that!

As I understand him, Jesus Christ was also a feminist. He treated women like human beings. He was loving and respectful towards women. We could make a long list of encounters with biblical women that demonstrate this.

And finally, he commissioned  Mary Magdalene with the assignment to report the resurrection.

In my Finnish mother tongue there are no gendered pronouns like “he” and “she.” There is only one word: “hän” for people and “se” for things. Even nouns have no gender. One does not differentiate between occupational titles, whether the person is male or female—they are all described with the same word. Maybe that has also had an impact on the sociological development of the people, because you need not have the preconceived idea that, for example, a judge, doctor or pastor must be a man. Everyone could become what “hän” (he or she) wanted.

The term for God, “Jumala,” is also not assigned a gender. Certainly in Finnish we also worship the Father, Son and Holy Spirit, but in our imagination, God is not necessarily male. In heaven gender does not matter anyway. Angels are neither male nor female. But we still live on earth, where there are men and women.

Studies show that countries in which women play an important role in society are the most economically, socially and environmentally sustainable. Without equality and inclusion of all genders in decisions, the problems of this world cannot be solved.

Without the involvement of women, the problems of the church cannot be solved either. The Seventh-day Adventist Church currently places a high value on “Total Member Involvement”—all members should somehow contribute to missionary work. The cooperation of women is welcomed here.

In the 1970s, the President of the General Conference, Neal C. Wilson, realized that something should be done for the minorities and the disadvantaged in the church. Even though women constituted more than 65 percent of the members of the world church and thus did not represent a minority, they were disadvantaged. He realized that women had gifts that they should use for God. That’s how women’s advancement began. Women were allowed to be ordained as local elders. They got scholarships for study at the theological seminary and were hired as pastors. But then the question naturally came up: whether women should also be ordained as pastors. The president, however, was not yet prepared for that.

Perhaps in order to distract attention from the ordination question, the church in 1985 began looking for alternative activities for women. Women should be able to contribute with their manifold gifts to serve other women in the form of women’s ministries. At the time I enthusiastically shared in the development of the Women’s Ministries Department, although I consider it as an effort to distract from full equality of women. As a team, we have tried to use the training seminars to motivate and train women to take responsibility in their local communities. With great pleasure, I experience that women who have attended our seminars are making progress. Shy women learn to act assertively and confidently and develop into competent speakers. I am proud of each of these women who discover their potential.

Feminism for a Better World

The history of women in our church is complex, just as the vocation of each woman is individually different. Some women feel called to be socially involved; others use their gifts in the service of the local church in the various areas that are covered there. Others, through their contacts, want to lead people to Jesus. But there are also women who feel called by God to serve as pastors. I respect every form of service and am happy that women make their gifts available to God.

For some women pastors, dealing with the question of ordination is a painful point. Many have given up, discouraged. Others bravely do their duty and try to ignore the negative remarks that hurt them. Dealing with the ordination question has become hurtful.

That is why women are grateful for every man who calls himself a feminist, who is involved in the fight for the loving equal treatment of women. That is honorable and Christian.

The world would be a better place if more women were in power in governments and decision-making bodies. There would be fewer wars and crises. The world needs the commitment of its women. This also applies to the church. The church should be an organization in which everyone can become anything, without restrictions.

Women are allowed to sit at the table, but much is still decided over their heads, without asking for their participation. They should not only sit at the table, but should also be able to help shape the decisions. I dream of a church in which men and women sit together at the same table and work together to do the work of God on earth, because Christ has called them to do so. 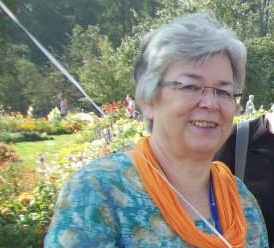 Hannele Ottschofski is from Finland, and has spent most of her life in Germany married to a pastor. She has served the church as a writer, educator, editor, conference speaker and translator. She was chosen by General Conference Women’s Ministries as one of five to receive the 2019 Women of the Year Award. This essay is a translated excerpt from her recent book, Mit am Tisch: Frauen in der Freikirche der Siebenten-Tags-Adventisten (At the Table: Women in the Seventh-day Adventist Church).