By Debbonnaire Kovacs, Feb. 23, 2017     When the Paradise Valley Seventh-day Adventist Church congregation call themselves “vibrant, diverse [and] multi-cultural,” they really mean it. Located in San Diego, California, the church offers services in English. However, attendees can get an FM headset in the lobby that will translate into Arabic, Laotian, Napalese, French, and Spanish. More than that (and perhaps even more important, since ideally, Sabbath School is where true communion happens in a church), there are Adult Bible Study classes in French, Laotian, Spanish, Tagalog, Ilocano, Napalese, and English.

Pastor Will James told me the North American Division has funded two Arabic speaking workers for the past two years to focus on the Arabic refugees in San Diego, since there is a fast-growing number from Iraq, Afghanistan and Syria.

James reported, “Peter, and Tafik [the two workers] have been working in the Mosques teaching Health Expo, and recently held a joint meeting at the El Cajon SDA church as a get-acquainted meeting with Adventist and Muslims. We talked about things we have in common: 1) similar health emphasis—no alcohol, pork, etc., 2) both trace our religious roots back to Abraham, and 3) both looking forward to the soon return of Jesus. At 3:15 one of the Muslim men sang the call to prayer, and the Muslim attendees went out for a few minutes of afternoon prayer. When they returned we had a Q & A, learning more about each other then, following the Muslim tradition, had a light supper together.” 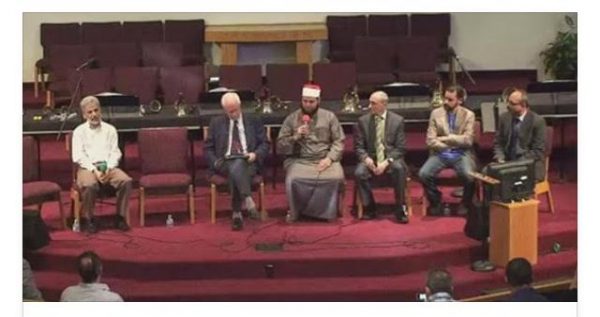 James says they plan to continue the dialogue.

How does a church get to this point? Well, it generally starts small. With Adventists, it’s likely to begin with community services in the form of giving away food or clothing.

James says that several years ago, the church was giving day-old bread to about 30 families, and wanted to do more. As they grew their community services work, they learned that there are 200,000 to 250,000 immigrants in San Diego alone. In striving to serve these refugees, they learned that one of their major needs is to learn English.

And so it began.

Today they have a full-fledged Refugee Assimilation Project, led by Ephraim Bendantunguka. You can listen to Pastor James tell the story of their growing immigration ministry and the philosophy behind it in an interview with Adventist Today’s Warren Nelson here. Here are a few of the ministries that have grown through their desire to help their neighbors.

On their website, which is well worth a visit, you can learn about more of their ministries. The short videos are particularly interesting. Here are two examples:

Such a growing and diverse church needs a diverse team. You can see them pictured with their families at the bottom of the front page of PV’s website, and significantly, both spouses are named: i. e. “Chris and Maverick Manlongat, Associate Pastor.”

Pastor James described how he came to ministry there. “I was pastoring the San Marcos Church in North San Diego County when the conference told me they wanted me to pastor at Paradise Valley. I was just breaking ground in a building project, so I told them I couldn’t for at least a year. They waited a year then PV extended an invitation to come. That was close to 15 years ago.”

I don’t think he’s looked back. He calls himself the CEO coordinating the pastoral team, with a main function of doing public relations and fundraising. Aside from the Manlongats, he has a youthful Paul Chung as associate pastor and, interestingly, Harry and Marilyn Bennet as “pastor emeritus.”

Ephraim Bendantunguka is the Director of the Refugee Assimilation Project.

Peggy James is volunteer Director of the Community Services and has 70+ volunteers working with her.

Oh, and that day-old bread? Here is the description of their current community services, from their website:

“Our Paradise Valley Community Services is an active group of about 120 volunteers who are busy serving our community.  Each Tuesday we are distributing over 10,000 pounds of bread, fresh produce, and groceries to over 500 families in our community. Volunteers are busy collecting food from Albertson’s, Target, Walmart, San Diego Food Bank, and Feeding America Food Bank for our weekly distribution. During 2016 we distributed 553,788 pounds of food to over 38,000 individuals, and gave away over 26,000 pieces of clothing with a combined value of over $1,000,000.00.” The church also holds rummage sales, and many women make quilts for sale or donation.

All photos provided by Will James.