Fall Meeting of the Society for Free Church Research in Germany 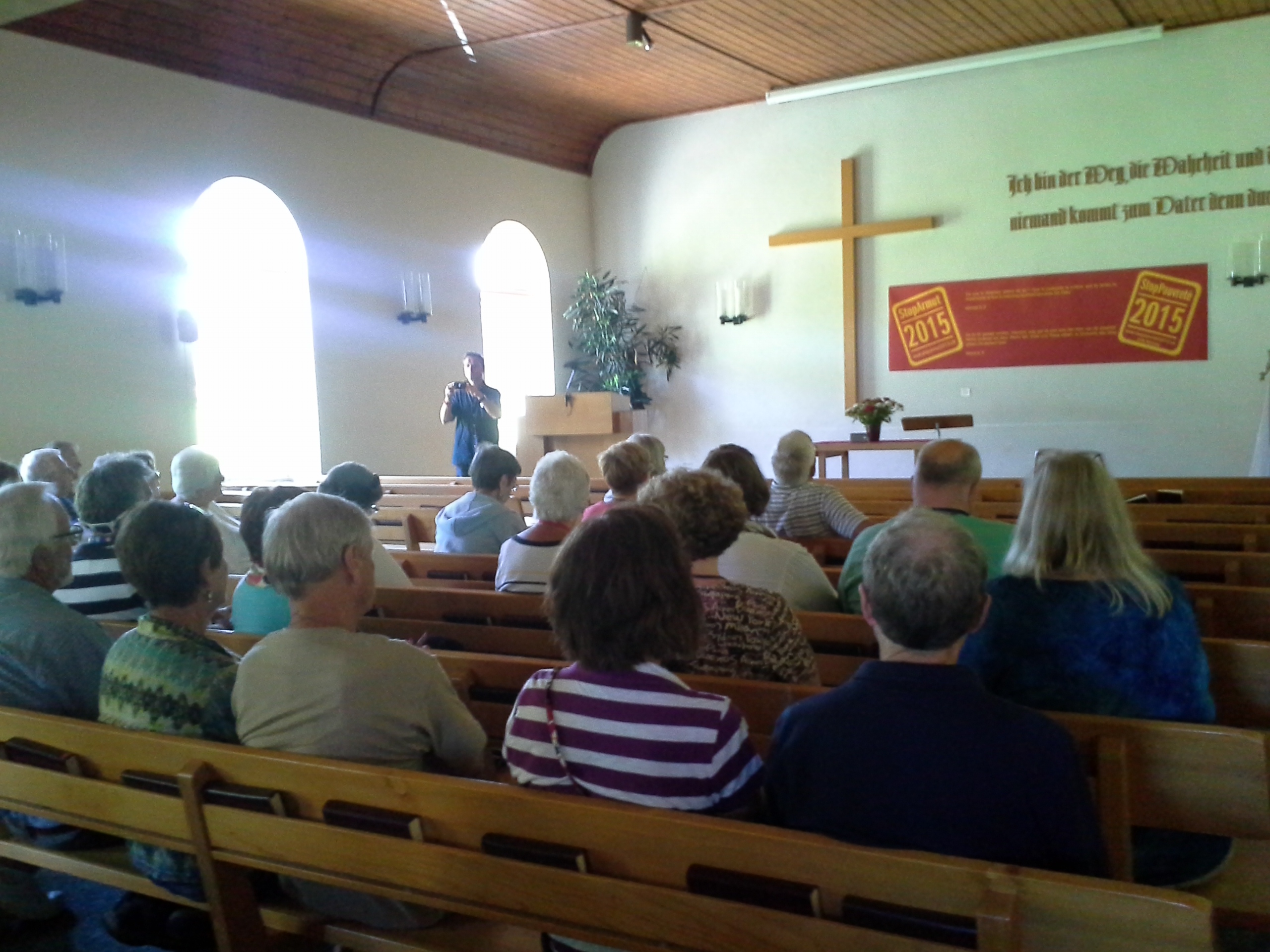 From APD, September 15, 2016:     The Adventist denomination in Germany is part of the “free church” tradition, which differentiates it from the Lutheran Church and the Roman Catholic Church, the two largest Christian bodies in the country. Adventist scholars participate in the twice-yearly meetings of the Society for Free Church Studies, which met last weekend (September 10-11) at the Thomashof Mennonite Conference Center in Karlsruhe.

Because next year marks the 500th anniversary of the Protestant Reformation, the meeting focused on the history of church renewal in various denominations. “The perception of a deficient ecclesiastical landscape and the need for renewal is part of the history of each of the free churches and shapes their self-image to this day,” Dr. Thomas Hahn Bruckart, vice chairman of the group, in opening the conference. And within the free church denominations there have been revivals over their histories. How “renewal” was understood theologically in each case and what concepts were allied with it, was not uniform.

The theme of the meeting was “Change or Restoration?” These two terms reflect the underlying trends in the way in which the free church denominations various renewal movements saw themselves in continuity or discontinuity to their traditions. The papers presented explored whether the groups saw themselves as reformed or seeking to restore early Christianity. Larger questions include; What role was played by the Reformation in the 16th century? Was it an “unfinished” Reformation or was it just part of a larger decline? These questions are not only about the basic theological positions of the groups, but also about their understanding of history and the self-image of each group.

“The Hessian recalcitrance and its theology of history,” was presented by Dr. Gilberto da Silva from the Oberusel Lutheran Theological College. Many areas of Germany saw the effects of the introduction of the “union” of the Lutheran and Reformed Church, starting in 1830. The protest of pastors and churches against this union resulted in the “free” Lutheran churches that formed in 1866 in the Electorate of Hesse which became part of Prussia. The Prussian Uniate of 1873-74 or the Hessian State Church constituted a serious attack on the Lutheran Confessions. In the communities where there was open resistance against it, 43 pastors who were followers of Marburg theology professor August Vilmar were dismissed. They led the “recalcitrant communities” and founded the “unruly church of the unaltered Augsburg Confession in Hesse.”

Because of his studies of the Augsburg Confession of 1530, Vilmar became convinced that laymen (including the sovereign) should not determine the affairs of the church. He called for self-government of the Church through the pastors. For him, there was neither an early Christian nor a Reformation ideal, there were only the respective stages of knowledge. The Lutheran Reformation to Vilmar was not yet complete because it lacked the knowledge of the ministry in the church.

Dr. Helmut Obst, from Halle, spoke on, “The Apostolic Movement from early Christianity and the eschatological community of salvation.” In the United Kingdom, under the influence of a Scottish eschatological revivalism in 1832-1835, twelve men were called by prophetic utterance  as apostles. They were assigned twelve mission areas (“tribes”). They wanted Christ at his second coming to find the church as the “bride adorned.” They believed the return of Christ would be in their lifetime. From this emerged the Catholic Apostolic Church. They argued that although the Reformation was very important, it had not done enough to renew the church completely. The creation of the biblical system with apostles and other offices should have been one of the primary responsibilities of the Reformation, but the Reformers were based on the wrong structures.

Dr. Erich Geldbach, at professor at Marburg University, reported on “the view of history and community ideals of John Nelson Darby” (1751-1834). Due to the church’s history Darby took the view that the church was dilapidated beyond repair. The decline had already begun at the time of the New Testament. Darby agreed in many ways with the Free Churches, however he criticized the intention to restore the “community of the New Testament.” A restoration of the original church of Jesus is no longer possible, he believed because God never restores something that man has ruined. It was only possible for the current community to gather in the name of Jesus and eagerly wait for the day of rapture through Christ. No offices, dogma and church buildings are needed.

Dr. Jan Carsten Schnurr of the Giessen Free Theological University presented a paper on the revival movement within the Protestant churches in the first half of the 19th century known as Pietism. This movement had a sense of history, Schnurr stated. Models were sought in the past. They were found in biblical accounts of the apostles and the martyrs of the early Christian period before Emperor Constantine (272-337 AD) declared Christianity the state religion. Even the Christians in the pre-Reformation period, such as the Waldensians (from the 12th century), Jan Hus (1370-1415) and John Wycliffe (1320-1384), provided interesting models. The Reformers were described as teachers who passed on the teachings of the Gospel. They were “church improvers” because they pointed the church back to the ground of Scripture, but the Reformation was not enough. It was necessary to restore the faith as it was lived in the second part of the Reformation; pietism.

Dr. Markus Iff, lecturer at the Theological College Ewersbach in Hesse Lahn-Dill-Kreis, in his presentation started with the idea that the outdoor Protestant congregations (FeG) considered children an unfinished Reformation. The towns saw themselves as “children of the Reformation.” However, the decisive factor was the “community of faith.” Evangelical meant to live as Protestant. The gospel binds the believer to Christ and therefore he should live an obedience of faith. In this sense, the Reformation was unfinished and the FeG could be understood as a movement of renewal.

Dr. Astrid Gentry of Weierhof in Bolanden-Pfalz presented a paper on the Hutterites in the 16th century. These Anabaptist churches go back to Jacob Hutter, whose followers lived in a community of property like the church in Acts 2. The Anabaptists were considered by the Lutheran, Reformed and Roman Catholic churches as apostates and persecuted. Hutter was martyred, burned at the stake in 1536 in Innsbruck. The Hutterites had to leave the South Tyrolean Valley and settled in Moravia, where they found protection from the nobility. There they introduced the idea of community of property, which was eventually seen as a sign of true believers and therefore as necessary for salvation. They believed the pure faith of the original church was laid waste by Emperor Constantine and the Reformers were seen positively by the Hutterites, only so far as they turned on the errors of the papacy. But, they also joined church and state which made them less than what they should have been.

The final speaker was Dr. Klaus Arnold, a pastor in Main-Kinzig-Kreis in Hesse, who spoke on “The Church of the Nazarene as a social and theological renewal movement.” The church was built from the Holiness Movement in the United States and was established in 1908 in Pilot Point, Texas. Today, it has more than two million members in 155 countries and is represented in Germany since 1958. According to Arnold, the Church of the Nazarene has developed from a social and theological renewal movement into an independent, global church that sees itself standing in need of reform and loyal to the principles of the Reformation.

All the papers will be published in the yearbook of the Society for Free Church Studies next year. The next meeting of the group will focus on “Reformation and Free Churches in Austria.” It will meet June 24 and 25, 2017, in Vienna.

The APD is the Adventist news service in Europe. The photo with this article is a meeting room in the Thomashof Mennonite Conference Center where this academic meeting was held.