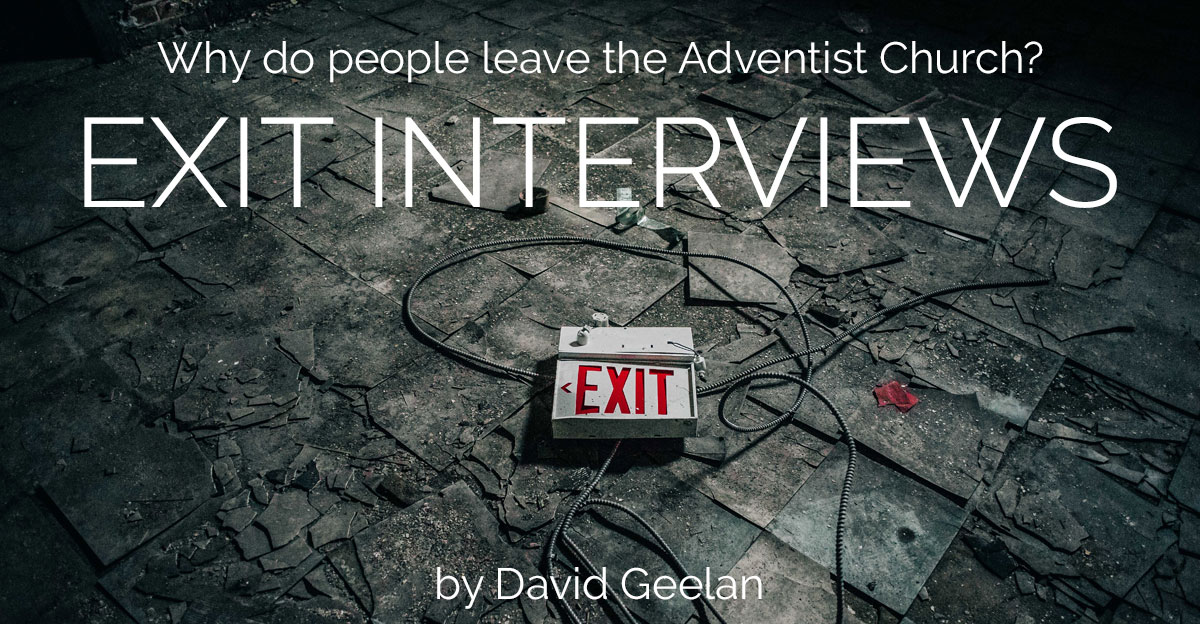 Somewhere between 40 and 50 people leave the Seventh-day Adventist church for every 100 who join it, and that rate has increased in recent years. Obviously, this is an important issue for the church. Understanding why people leave might help the church to prevent some of the causes… but it might also lead to accepting that in some cases leaving was the best outcome for someone.

There have been a number of projects dedicated to looking at attrition in Seventh-day Adventism, at who leaves the denomination and why. One of the most recent is this presentation by Dr. David Trim, the church’s Director of Archives, Statistics and Research, presented in 2016. (Dr Trim has also been interviewed the topic.)

While some studies have been conducted that did interview former Adventists to ask about their reasons for leaving the church (and Dr Trim’s work does draw on those studies), many such presentations simply assume the reasons. The most common explanations given by current Adventists for why former Adventists have left are: (1) having been “hurt” in some way by the actions of church members or (2) wishing to “enjoy a life of sin” without the constraints on behavior of religious belief.

I thought there’d be value in simply asking some former members about their reasons for leaving, to try to develop a more nuanced understanding of what is going on for people. I should note that, although I do social science research in my day job, and have even published books on research methodology, this is by no means a formal study, and the results are only indicative. It’s an informal conversation with friends. From an ethics perspective, I won’t use any names, and I have the consent of all participants to share their reasons and stories.

It’s worth thinking about the “destinations” where former believers find themselves… or at least, the current waypoints on their life journey. By no means all end up “enjoying that life of sin”—in fact, very few do. Quite a few join some other Christian denomination, or consider themselves “spiritual but not religious.” Others become, if not “agnostic,” perhaps “apatheist”: apathetic toward God and religion. They are not anti-religious, particularly; they just consider that religious belief has no meaning or relevance in their lives. They find meaning in their relationships and secular (non-religious) activities.

And, of course, some also become atheists who consider that religious belief in general is a delusion. Even within the atheist group, some are more strongly anti-theistic while others are closer to the apathetic position.

I think this is important, because it takes us a little beyond the binary of “Adventist = saved, non-Adventist = lost.” If we genuinely accept that believers in other Christian denominations can be saved, then attrition from Adventism is not seen as necessarily attrition from faith or salvation. A more sophisticated and nuanced understanding of where people find themselves “after Adventism” is simply more accurate, and therefore more useful, than a simplistic binary.

I posted a request on the Facebook group “Adventist Fight Club,”[1] asking for former Adventist members to share their reasons for leaving the church, and have tried to synthesize the main themes and issues that were brought up in the 113 comments posted in that conversation. In a spirit of full disclosure and free inquiry, here’s a link to the thread so you can check whether I did a fair and accurate job! I’ve also added some of my own thoughts and experiences, as someone who no longer actively identifies as a member of the Seventh-day Adventist church but has “legitimate peripheral participation” (see my recent article “Why We Should Value a Diversity of Beliefs” in the Adventist Today print edition).

A couple of people also shared in direct messages, and there is a digression in the thread into whether gender is binary or not, but over all I identified 14 themes that came through. No doubt many of them overlap to some extent, and I’ve tried to group them a little but not really presented them in rank order or order of frequency of responses – the body of data is too small for that kind of analysis.

Clearly some of these reasons are more likely than others to lead to, for example, remaining Christian and moving to another denomination versus being an atheist. And no doubt this short list is far from exhaustive, but I think one important thing it shows is that, in many or even most cases, the driver for change is not “the pleasures of sin for a season,” but personal integrity and a commitment to following the truth and evidence where it leads, and to living out each person’s moral values and commitments. People have chosen to leave the church – or had the church decide to leave them – because there was some inconsistency between something very important to that person and the realities of the Adventist denomination.

It’s probably worth noting that some of those realities are doctrinal, while others are cultural but enforced with the strength of doctrine, and still others – like the protection of sexual predators – are predicated on the perceived importance of protecting the organisational structure of the church over individuals. Not all of these features are inevitable features of Seventh-day Adventism, and almost none of them are unique to it: many other large organizations have protected predators, for example, and most religions, Christian or otherwise, patrol their borders and seek to eject heretics.

If Adventism is keen to reduce the attrition rate, serious attention to some of these concerns – especially the moral and ethical dimensions – will be essential. There will also, however, be people for whom Seventh-day Adventism is not an appropriate “fit” or spiritual home, and perhaps farewelling people amicably, without rancor and with best wishes is a better approach than simply considering them “lost.”

[1] Despite the pugilistic title, “Adventist Fight Club” is not an anti-Adventist site, and includes a number of current members of the church among its membership. The title is a reference to the 1999 movie starring Brad Pitt and Edward Norton. The group is for free interchange between believers and former believers. It does sometimes include robust language and robust debate. (I have no role with the group as a leader or moderator.)

[2] A Malaysian doctoral student I supervised, Nasrudin Subhi, conducted in-depth interviews with 10 gay men and 10 lesbians about how they sought to harmonize their sexuality with their Christian faith. That work is available here.