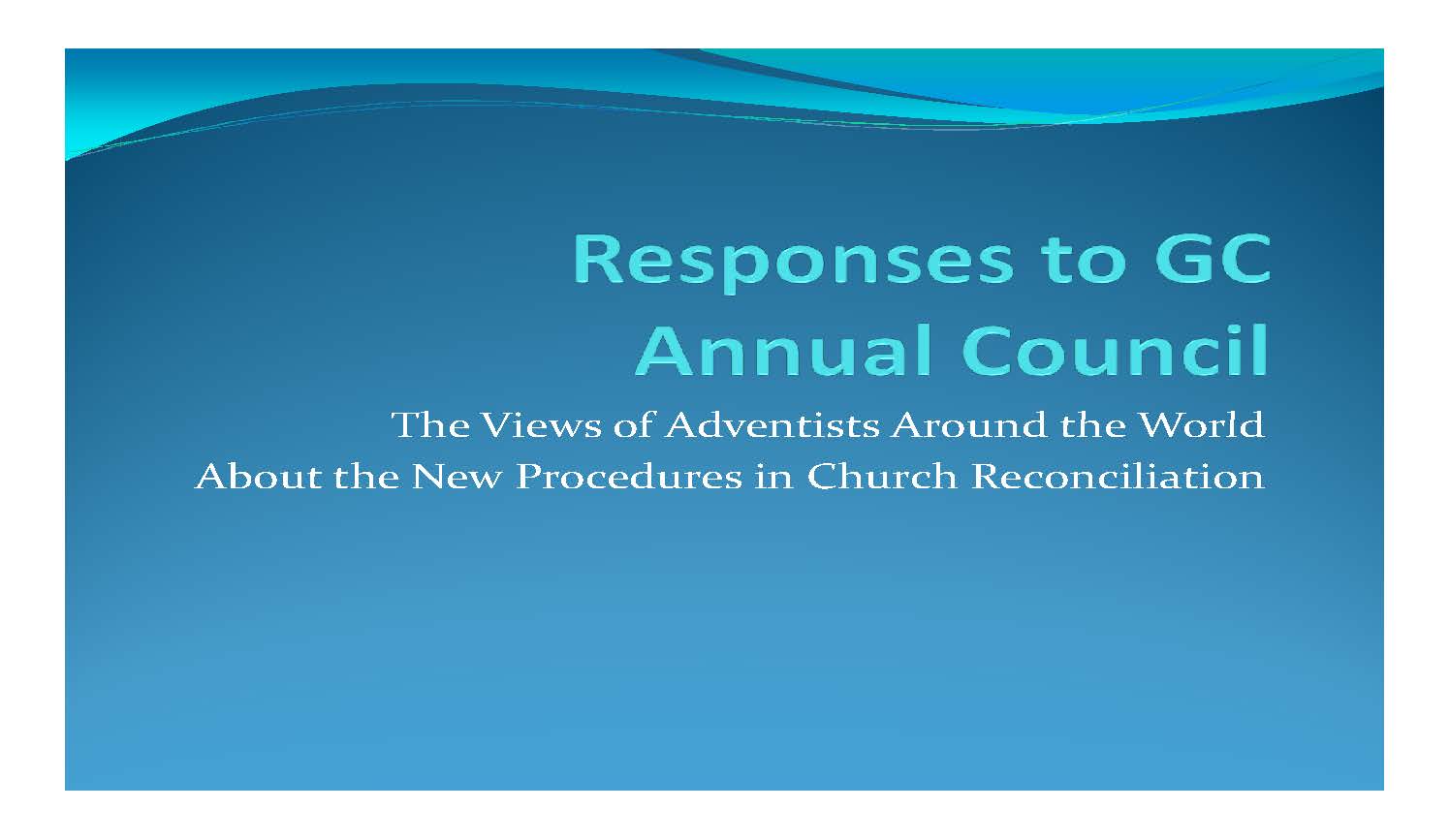 From the Trans-European Division News, October 11, 2016:     On Tuesday the leadership of the Seventh-day Adventist World Church, meeting during Annual Council in Silver Spring, Maryland, voted a document entitled “Unity in Mission: Procedures in Church Reconciliation.” Its aim is to provide guidance on how to facilitate reconciliation “with entities that appear to have overlooked or ignored the biblical principles as expressed in the Fundamental Beliefs, voted actions, or working policies of the Church.”

The full document can be accessed on the Adventist Review website and comes as a consequence of various Unions around the world interpreting or requesting adaptation of the working policy of the Seventh-day Adventist World Church to accommodate their strongly held beliefs on equality and the role of women in church leadership and ministry. In some cases the interpretation also has legal implications within particular countries.

The vote came after significant discussion at numerous levels of church organization and is seen by the World Church as the way for the Church to move forward together on an issue that has been contentious for over thirty years.

The document indicates that over the coming twelve months there will be some space for dialogue. This is important. In today’s modern world, particularly in a European context, issues of equality are significant, both in society in general and within the Church.

“At the same time,” states Raafat Kamal, president of the Adventist Church in the Trans-European Division, “we want to ensure that such dialogue does not become the overruling priority for our Unions, but is simply a context within our much wider prerogative of sharing our faith in the various and diverse communities of Europe.” That prerogative can be clearly seen in the Mission report the TED presented to Annual Council during Friday evening vespers on 7 October.

During a specially convened meeting at World Church headquarters prior to the Tuesday vote, Kamal reminded TED Union presidents of a series of statements and affirmation meetings generated by the TED following the GC Session in San Antonio in 2015. He noted that Union and TED leadership across the territory is committed to seeing the development of women in ministry and leadership.

With that commitment, and within their unique and diverse cultures, Unions within the TED have reflected on pastoral and equality issues in a variety of ways resulting in a diversity of perspective and practice. Unions have explored the issue within what they see as a biblical mandate and, as with the World Church, have come to varied conclusions. This is equally reflected by church membership at a local level.

The TED believes that there is room within the Church for a diversity of perspective – and that mutual respect for each other is a valued part of our Christian unity. Pastor Kamal notes that even in the Book of Acts, and following the Council of Jerusalem, the spirit of Mission led to variations in the application of the very principles that had been agree upon.

For instance, Acts 15:29 indicates that converts should not eat food offered to idols, yet later Paul indicates that is only a problem if it causes a stumbling block for ‘weaker brethren’ (Romans 14 & 1 Corinthians 8). The Jerusalem Council equally concluded that circumcision was not part of the salvation package but rather “a yoke that neither we nor our ancestors have been able to bear.” (15:10) Nevertheless, in the next chapter (16:3) Paul circumcises Timothy while in Galatians 2:3-5 he takes the opposite view, defending Titus from circumcision. Culture and context in each circumstance determine action. That action is for one purpose – to move forward with the Gospel.

Such a practical spirit fits with the council of Adventist Church co-founder, Ellen White. She writes, “Long-cherished opinions must not be regarded as infallible. It was the unwillingness of the Jews to give up their long established traditions that proved their ruin. They were determined not to see any flaw in their own opinions or in their expositions of the Scriptures; but however long men may have entertained certain views, if they are not clearly sustained by the written word, they should be discarded. Those who sincerely desire truth will not be reluctant to lay open their positions for investigation and criticism, and will not be annoyed if their opinions and ideas are crossed.” (The Review & Herald, July 26, 1892)

TED Officers, working in partnership with the Unions will carefully study the document and see how the general principles of the document can best be applied within the culture and mission context of Europe. The TED sees the document as a general guideline and recognises the need for sensitivity and discernment as what has been voted has direct implications regarding decisions made by some of our Unions.

Such discernment includes the need for a very honest discussion on gender equality as a value within European Adventism and a more general acceptance within the Adventist World church that diversity and acceptance can benefit mission and be a positive aid to unity in Christ rather than a distraction.

The Trans-European Division, indeed much of Europe, lives within a strong heritage of revival and reformation. It is almost 500 years since Luther pinned his 95 thesis to a church door in Wittenberg. European Adventism lives within that heritage, holding the Bible high and constantly seeking to move forward in its understanding of biblical values.

Many of the great reform and revival movements of the past originated in Europe, and even in today’s secularized European Society, committed, loyal and dedicated Adventists are still seeking ways to reach out in what is now a much more difficult culture, and a culture where, both within and outside the church, issues of gender inequality are no longer understood. Luther, John Wesley, and even many of our Adventist believers from the Soviet Block era, took positions of conscience in order to be a witness for God. Modern, European Adventists still live with that active conscience.

Kamal states, “We must be careful that in actions calling for ‘reconciliation’ that we do not quash that spirit, but rather that we endeavour to work in harmony with each other so that, as in Galatians 6:2, we can be actively seen to be bearing one another’s burdens.”

For over a year now, the TED leadership has been working with the various Unions within its territory and with World Church leadership to find a way forward. That work will continue within the space that the Unity in Mission document provides. Kamal concludes, “I appeal that we do not make decisions, send messages or develop outcomes and statements that will keep us occupied for the next four years with issues that divide us. Instead, please join us to focus on our Adventist Mission – why we exist in Europe.”

He adds, “While I have attended recently a number of our union executive committees and extraordinary sessions deliberating the subject of women’s ordination, our members and leaders wish to be part of the world church family and recognize that our strength comes from the Lord united as a world community.” Kamal emphasizes, “We need each other to grow together. To build a healthy diverse church requires that we provide opportunities for open dialogue and commend those who have the courage to discuss controversial matters, as well as having the determination to deal with them. We need to approach diversity with utter humility on our knees where we become again the learners if, in fact, we are to succeed in establishing diverse congregations of faith.”

With such an approach, the prayer of Jesus in John 17 can become a reality in both a local and a global context, as “the world can come to believe” via our united, Christ-centered message.