Education is Not “One Size Fits All” 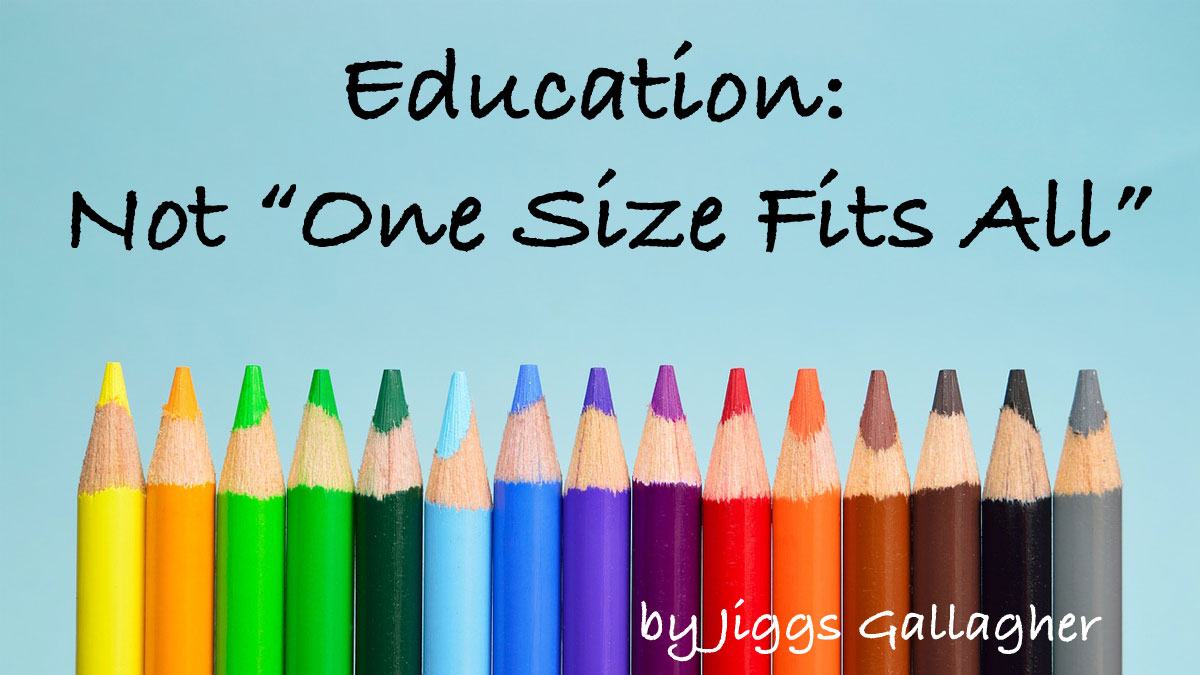 “Train up a child in the way he shall go, and when he is old, he will not depart from it.”

Ergo, Adventist education. Encouraged by Ellen White, as a salutary alternative to the newly nascent (1850s) American ideal of public education. She believed whole-heartedly in education, but thought that it must have the stamp of the Adventist religion in order to inoculate children from the (primarily American, at the time) “way of the world.”

I am a product of that system. I was born into the Seventh-day Adventist Church, and after a brief excursion into “secular” child care and kindergarten because of my working mother, I entered SDA parochial school in the fall of 1956, first grade at John Nevins Andrews Elementary School in Takoma Park. It was a long calculated decision, on my parents’ part. Part of the mass movement to the suburbs from the District of Columbia in the 1950s, they chose a house across the street from the school in 1952, when I, their only-begotten son (or even child), was just 2 years old, for a specific reason. My father said, “No son of mine is going to ride a school bus.” So they picked a house directly across the street from the entrance to JNA.

When I reached the age of 5 years and 7 months, I begged my mother to let me go to school in September of 1955. For the previous year or two, I would stand on my front porch and wave to students and teachers heading into the building, longingly. I really, REALLY wanted to join them.

But Miriam Tymeson, the legendary principal and daughter of a General Conference official, would have none of it. She adhered to the EGW dictum that children should not begin grade school until six, or maybe seven or eight, or 10, years of age. And so I waited.

I’m sure my first day there was wonderful. I actually do remember (somewhat) of the excitement of settling into a desk, and watching the other parents and children bustling around. I liked the fact that I could look out the large windows and see my front door.

But what I now see, in retrospect as a collector of Medicare and Social Security, is that it could have been so much more.

The predominate culture of Adventist elementary education at that time was certainly religious inculcation, conformity, fitting in with the dominant religion, punishing the variances, and making certain that, above all, children obeyed. OK, fine. Most kids, probably, need this.

I didn’t need this. I was by nature shy, and above all ready to “conform” at the drop of a hat—and I would drop the hat. My father, a lapsed Irish Catholic (not yet a baptized SDA, which he would become later), who grew up on the streets of Washington, D.C. served in the Navy in World War II and had lived a pretty hard life up to that point, had a vocabulary that would make a sailor blush, as they say. I was more than familiar with every four-letter word, and then some, that you could imagine, from the cradle.

My mother (shall we say, an ardent Adventist) once sat me down on the couch when I was seven or eight, for a “lecture.” “Daddy says a lot of bad words,” she said. “But we know we can’t say those words anywhere else, outside of this house.” I don’t even remember this episode, but I remember her repetition of it in later years. I’m sure I looked intently into her eyes.

“No, I’ll never say those words at school, at church, or even to my playmates,” I’m sure I said in response.

And I didn’t. Ever. (At least not until I was long since an adult and long out of school, and with a judicious restraint.)

She had friends whose children cursed at school and they got the dreaded phone call at home or work, in the middle of the day, from Mrs. Tymeson, with the terrified child standing in front of her desk. My mother always feared that day would come. But of course it didn’t. I knew on which side of the Vegeburger my bun was buttered.

So I proceeded up the grades, obeying, being the best little boy in the world, always doing what I was told. I was once (only once, in eight years) hauled into the office over a fight. It was because a nasty bully, in the third grade (I still remember his name, but I won’t humiliate him or his grandchildren by naming him) picked a fight with me when we were lined up outside the door, waiting to go back into class. One of the office staff saw it outside the second floor window, and sent someone down to bring both of us up for discipline.

I was humiliated, because I didn’t even fight back. He kept punching, and I kept dodging and weaving. I tried to explain all of that to the authorities, and of course my opponent kept insisting I was to blame. I don’t even remember the punishment, now, but I remember that we both were punished.

The point of this reminiscence is that different students need different cultures. I, the shy, backwards, socially inexperienced child needed an environment that encouraged me to take risks, not an endless repetition of the Ten Commandments, buttressed by endless passages from the Red Books. My step-daughters went to Montessori schools in California until third grade, and it was a great place for them. They learned at their own pace, dabbling in things that interested them and allowed them to grow. I could only wish that I had had that opportunity.

One of the few experiences that allowed me to blossom was a reading program the school bought. Named SRA, it was a huge box of lessons, color-coded, sitting on the counter in the back of the class. I think we got it in the sixth grade, and used it into the seventh.

We were allowed to read the stories and essays by ourselves, take exams and move to the next level, at our own speed. It was great. I shot through those things. This is going to sound conceited, but I’ll say it anyway–I was a smart kid. And sometimes I hated it, because many of the other kids resented me and called me the teacher’s pet. So I would try to act dumber and slower, in order to fit into my group. Not a smart thing to do, but we do what we have to do to survive, especially in the jungle of childhood, until we learn better coping mechanisms.

The other good learning experience I had was being placed in a two-class room, fifth and sixth grade, for my fifth-grade year. I was smart enough to learn my own lessons, and had plenty of time to listen while the teacher talked to the sixth-graders. So the next year I sailed through with virtually no effort. I probably should have been jumped a grade, but I would never have even dreamed of asking for that. And no one else suggested it.

Looking back on the experience now, I think I would have set a much better course for my life if I had been encouraged to take risks, to push myself, to do things that might have been uncomfortable at the time but would have helped me grow more quickly.

I’m not really complaining. I have done most of this make-up work in adulthood, because I knew I needed to, and I’ve finally (in my 60s!) reached a point that I’m comfortable in my own skin. But it has taken more than a while.

While I’m certain that most of my old classmates (maybe 80-90 percent) really benefitted from conformity and extreme discipline, I now know that I was one of that small minority that definitely did not. I’m sure there were others who could look back and say the same thing. I wonder if Adventist education, today, can look at different children and see their needs in such an individualistic way.

Jiggs Gallagher is a senior editor of Adventist Today.