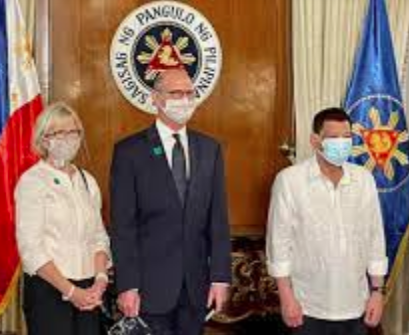 16 November 2021 | General Conference of Seventh-day Adventists President Ted N.C. Wilson met with Philippines President Rodrigo Duterte on Nov. 10, 2021, for what was supposed to be a 5–10 minute courtesy call that stretched into a 36-minute Bible study and prayer.

“I have never seen this kind of visit in which the president allows someone to have so much time and the opportunity to share such a message,” said Bienvenido Tijano, an Adventist pastor who is well-acquainted with Duterte as the Philippines’ ambassador to Papua New Guinea.

In 2018, Duterte called God “stupid,” according to an article from the BBC, and criticized stories in the Bible. Duterte is known for making outrageous statements deemed highly offensive, cruel and/or misogynistic. His presidency is infamous for its approval of extrajudicial killings against drug dealers and users.

Wilson was at Malacañang Palace, the president’s residence in Manila, to express appreciation to Duterte for granting amnesty to former rebels that had converted to Christianity, according to an article from Adventist News Network.

The former rebels had decided to give their hearts to Jesus after listening to Adventist World Radio. On Nov. 13, 2021, 500 former rebels and their leader were baptized on Mindoro Island. Conflict with rebels has been ongoing for the last 50 years and has claimed at least 40,000 lives. The government’s offer of amnesty was seen as a significant step toward ending the conflict.

At the Malacañang Palace meeting, with Duterte’s consent, Wilson opened a small black Bible and gave a Bible study on Micah 6:8: “He has shown you, O man, what is good; and what does the Lord require of you but to do justly, to love mercy, and to walk humbly with your God?” (NKJV).

“This is the formula, your excellency, for those who want to help people, to lead,” Wilson said.

Wilson also presented Duterte with a Bible, Ellen White’s books The Great Controversy and Steps to Christ, and a pen engraved with the Adventist Church logo, which he told the president could be used to underline verses in the Bible.

“I am not into religious rituals … I do not believe in them,” Duterte said during the meeting with Wilson. “But I have a deep abiding faith.”

In 2016, Duterte said he would convert to Adventism if he were excommunicated from the Roman Catholic Church, but many took his comments to be a joke.