Dr. Leonard Bailey Granted a Star on the Flag for Hope 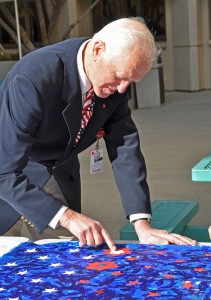 Dr. Leonard Bailey wasn’t always seen as a star. After his transplant of a baboon heart into “Baby Fae” in 1981, controversy exploded around him, and of course you can still find all the arguments online. But Dr. Bailey, whose announcement to the press when Baby Fae died clearly showed his deep emotion, wanted nothing more than to spend his life “working to lengthen the lifespan of infants born with an untimely death sentence. Many stay in contact [to this day]. ‘I see old patients sometimes and they give me a hug and I think, “My goodness, you were just a baby when we first met and here you are.” It’s thrilling. … That by itself wouldn’t get me up in the morning, although it’s a really sweet piece of it. What gets me up is the challenge to make it better.’” [Quoted from Adventist news.]

Twenty-one years ago, in heart-wrenching circumstances in which one set of parents, whose baby was dying, wanted to help another set, whose baby, called “Baby Moses,” might have a chance to live, Dr. Bailey performed the first infant-to-infant heart transplant. This young man is still alive today, in Las Vegas. I hope his life gives some hope and comfort to the other grieving parents.

These days, due in large part to Dr. Bailey’s persistence and courage, it’s a different story. A medical website states, “According to the registry of the International Society for Heart and Lung Transplantation, approximately 350-500 pediatric heart transplantation procedures are performed worldwide each year, representing about 12% of the total number of heart transplants performed.”

The same article quoted above, from 2009, states that Loma Linda University Medical Center was nearing its 500th successful transplant, and that one of the patients was then in medical school.

And this month, on February 1, 2016, Dr. Bailey was officially recognized as one of 50 “Stars” in America, when he was awarded a star by the Flag for Hope Project.

What, you ask, is Flag for Hope? You may well ask, and may wish to learn more about this amazing project or follow it on its webshttps://www.flagforhope.comite. I found the following description (one of many, but my favorite) on their Florida archives.

What is Flag for Hope?

It’s a way of viewing our place in this great country, and in the world, a view that celebrates our commonality, and puts aside the differences that separate us.

And it’s America’s chapter in Impressions of Humanity, an epic and monumental humanitarian art project the likes of which has never been created. Marcos Antonio, artist, is helping the world to create its own work of art by leaving hand impressions on a canvas. When complete, the canvas will constitute the largest single piece of art in the world, made up of 960 panels from every country on the globe. Each country will be represented by 5,000 individuals invited to make their impression.

The ultimate goals of “Impressions of Humanity” are:

Note that it is planned for 5,000 individuals (some other descriptions say 3-4,000) to make up the flag. You can find images depicting many people’s fingerprints making up the stripes, for instance. However, there are only 50 stars on the United States flag. Those are reserved for “50 iconic Americans that have greatly contributed to the strength and well-being of our country.  These individuals have inspired, empowered, and encouraged their fellow citizens through their actions as pioneers, role models, and leaders in our society.  They come from all backgrounds and embody the essence of the American spirit.” [www.flagforhope.com]

On their Facebook page, Flag for Hope has a full story on Dr. Bailey. “We are so pleased to announce that Dr. Leonard L. Bailey, reknown (sic) heart surgeon and pioneer of the infant heart transplant is the newest star on Flag for Hope! … Thank you Dr. Leonard Bailey for participating in the Flag for Hope Project supporting Unity and Patriotism across America. You are a true hero in every sense of the word.”

Perhaps the most important quote I found was this one: “Bailey says he’s able to stay spiritually grounded, even when he loses patients. ‘It’s always an emotional and dreadful experience. But it actually strengthens my faith. In my view that’s part of life. There are two things certain in biology: birth and death.’”