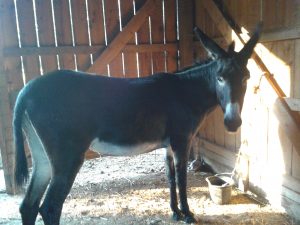 This is my donkey, SaraBeth, who is neither little nor gray like the one in the story…but you get the picture! Photo by DLK

My mother thinks it’s disrespectful, but I call my donkey Abraham. He is the most beautiful donkey that ever lived! His fur is silvery gray, and he has a white muzzle and white around his eyes, and white inside his fluffy ears. He has a black cross along his back and down his shoulders, just as neat as if Eliab the scribe painted it with his ink.

Of course, it’s more important how you act than how you look, and Abraham is also the most loving and gentle donkey that ever lived. Amma says it’s because of the way he’s grown up.

When he was first born (and I was only seven), he was born too soon, and was very small. Abba didn’t think he would live, but I begged to try and help him, so Abba said I could. At first, I even had to help him stand up and nurse, but he grew stronger, and I’ve loved him, and petted him, and taught him things, ever since. He is all grown up now, five years old and even bigger than our other donkeys, and he is finally ready to be trained to ride! I know it will be very easy, because I’ve taught him to lead politely, and to carry things—first little things, then bigger things.

Today I have Abraham tied up in front of the house, because today I am going to try riding him for the very first time. I can’t wait!

I just went inside to tell Amma I’ll be back soon, and when I came back out, there were two men untying my donkey! I ran up and said, “Hey! What are you doing? That’s my donkey!”

They looked at me, and one said, “The Lord needs him.”

I opened my mouth to protest, but stopped. I knew these men! They were followers of Jesus! I loved listening to Jesus tell stories. Jesus needed my donkey?? “But—he’s never been ridden yet!” (And I wanted to be the first!)

“It’s okay,” said the men, and they led Abraham away. He walked along just as politely as I’d taught him. I raced back in to tell Amma, and to beg permission to follow. Then I ran to catch up. I stayed behind—I wasn’t sure if they would mind my following. But I knew Jesus wouldn’t mind. And I wanted to see what was going to happen. I felt a little cheated, hoping they just wanted him to carry something. If someone else got to ride him first, after all my work…! Well, I tried not to be upset. After all, if Jesus needed him…!

They led Abraham outside the town to where Jesus waited with the rest of his followers. There was a crowd gathering around him, too. It’s really crowded, because it’s time for Passover, and the whole city is full—though not as bad as Jerusalem! Abba and I went there yesterday, and it was hard to even walk through all the people!

I watched the men lay cloaks across Abraham’s back, and I held my breath. I was pretty sure he wouldn’t buck or anything, but…what if he did? And who was going to—my mouth fell open as Jesus himself got on Abraham’s back. His long legs hung almost to Abraham’s knees, but Abraham was as calm as could be, just as if he’d been ridden every day of his life! My heart jumped a little. I had wanted to be the first to ride Abraham, but it was even more special if Jesus was the first to ride him! My friends would never believe this!

Jesus had a stick in his hand to tap on Abraham’s shoulder, so he must know about riding donkeys. He tapped, and Abraham started to walk. No jerk, no hesitation—I was so proud of him! I ran up eagerly, and Jesus smiled right at me! I grabbed some palm branches from a tree nearby and waved them excitedly.

All the people did the same thing. Some threw cloaks down on the ground for Jesus to ride over, but Abraham didn’t even toss his head or snort. He just walked steadily along, even though the people started shouting and dancing and singing all around him.

“Blessed is the king
who comes in the name of the Lord!

Peace in heaven,
and glory in the highest heaven!”

I stayed close to Abraham (just in case), but I started to sing and praise, too. I had heard Abba and Amma talking at night, saying Jesus should be king. Maybe this was it! Maybe he was going to become King of the Jews and kick out the Romans!

As we entered through the gate of Jerusalem, the crowd grew so thick I was afraid I would be trampled. I kept a close eye on Abraham—he was definitely not used to such crowds or such noise—but he stayed as calm as could be. Probably it was because Jesus was there. Who could get scared with Jesus around?

I gulped and stumbled to a stop as some priests blocked the road, their faces all screwed up into scowls. “Tell your followers to stop it and be quiet!” they demanded.

The crowd slowed and hushed, watching and waiting.

Jesus looked sad as he gazed at the faces of the priests. Then he pointed to the ground. “If I tell them to be quiet, these stones will start shouting,” he said.

I held my breath. The priests’ faces grew dark as night, but for some strange reason, they got out of the way, and we all surged past them, shouting louder than ever.

That’ll show them! I bet Jesus will be king by tomorrow!

“Hosanna! Blessed is the king!! Hooray!!”