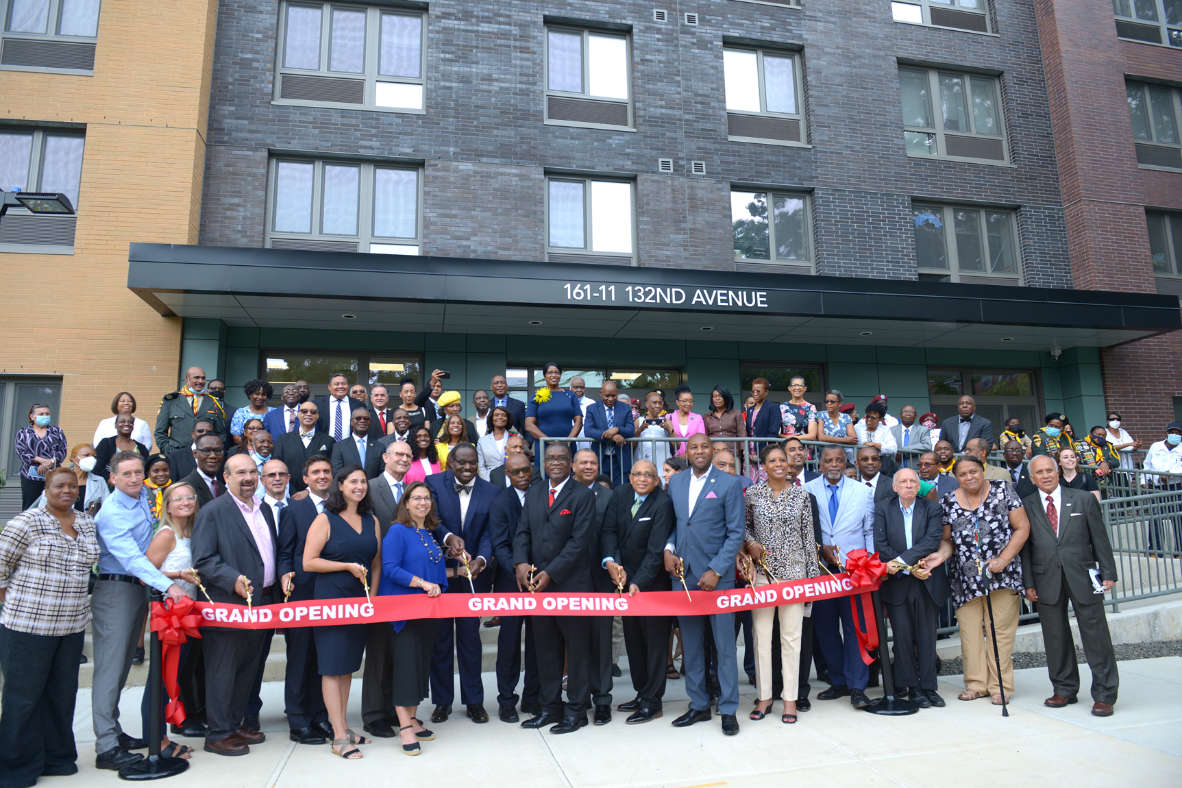 The ribbon-cutting ceremony was hosted by the project’s partners – Northeastern Conference of Seventh-day Adventists (NEC), Fifth Avenue Committee (FAC), and Mega Development. Pastor Wilson opened the ceremony by noting the importance of creating housing for seniors that creates a sense of stability and community for seniors at all income levels. Also in attendance were the administrators of the Atlantic Union Conference and the Greater New York Conference.

Dr. Daniel Honoré, President of the Northeastern Conference of Seventh-day Adventists, noted the success of this unique partnership; “We are delighted to know that 158 elderly residents of New York City are assured a safe, clean and affordable place to live. One third were previously homeless. The Seventh-day Adventist Church is committed to serving the needs of our community, and the Northeastern Towers Annex reflects that commitment.”

City officials, elected officials, community leaders and more took part in a ribbon-cutting ceremony for the development. This new building includes 58 studios, 100 one-bedroom apartments, and 1 two-bedroom superintendent’s apartment. The building is 100% affordable for very low-income residents at incomes at or below 50% of Area Median Income. 100% of the rental apartments will be supported by a project-based Section 8 contract, under which tenants pay only 30% of their income in rent. Northeastern Towers Annex provides new amenities and critical affordable housing for seniors in the Rochdale neighborhood of Queens.

Northeastern Towers Annex includes several on-site amenities specifically designed for its senior residents, such as a community room, a media room, an exercise and wellness center, computer room, social service office suite, warming pantry and storage, laundry and television lounges on nearly every floor, a rooftop terrace and garden, and a personal care services room. This unique project was constructed adjacent to the existing Northeastern Towers senior affordable housing development, and many amenities at the Annex are accessible to residents of both buildings, thanks to an enclosed connection between the two.

The Northeastern Towers Annex was financed jointly by the NYC Department of Housing Preservation and Development (HPD) and the NYC Housing Development Corporation (HDC) with a total of $93.6 million in public and private investment. HDC provided more than $50 million in tax-exempt bonds and an additional $8.7 million in corporate reserves. HPD provided more than $13 million in subsidy. In addition, the project benefits from Low-Income Housing Tax Credits (LIHTC) that generated more than $37 million in tax credit equity from investors through Wells Fargo, who also provided the letter of credit. Queens Borough President Melinda Katz provided $3 million and NYC Council Speaker Johnson and Councilmember Adams provided $1 million in discretionary capital funding from the City of New York, which enabled the project to include a solar canopy, fifth-floor roof deck, community spaces and other amenities to support the senior residents.

“Wells Fargo is pleased to be part of this transformative project which brings much needed affordable, high-quality, senior housing to the Rochdale neighborhood of Jamaica, Queens and addresses the housing and social service needs of its residents,” said Katelyn Meehan, Vice President in the Community Lending & Investment division at Wells Fargo. “We are proud to work closely with Fifth Avenue Committee, Mega Contracting, and the Northeastern Conference of Seventh-day Adventists on financing Northeastern Towers and are excited by the final building which provides community facility and amenity space to the residents, as well as clean energy.”
“This project is a shining example of what can be accomplished when local government and community organizations work together. I am proud to be part of today’s ribbon-cutting and to have worked as Borough President to help the developers of the Northeastern Towers Annex see this project through, so that there are now quality, affordable apartments and amenities that will help very low-income seniors age gracefully and with dignity,” said Queens District Attorney Melinda Katz.

“No senior should ever be priced out of the neighborhood they love and proudly call home. With the opening of the Northeastern Towers Annex and its more than 150 apartments for our elders living on low or fixed incomes, we are ensuring that those who need quality affordable housing the most will have it right here in the heart of Southeast Queens,” said Queens Borough President Donovan Richards Jr. “With more than 300,000 seniors living here in The World’s Borough, we look forward to many more such ribbon cuttings as we work tirelessly to make Queens an affordable place to live for all, but especially our seniors seeking the ability to age gracefully and with dignity.”

“The Northeastern Towers Annex is certainly an asset and welcome addition to our community, especially for seniors who are living on fixed incomes. This affordable housing site comes with many great amenities for its residents, some of which I proudly funded with my City Council Speaker Corey Johnson,” said Council Member Adrienne Adams. “I thank HPD, HDC, Fifth Avenue Committee, Northeastern Conference of Seventh-day Adventists, and all of the partners who made this project possible. This building will address the dire need for senior affordable housing in our City – a crisis that truly must end. I am pleased that our aging residents will directly benefit from this long-awaited development that represents dignity and comfort for them.”

Northeastern Towers is currently completing lease-ups, providing some of New York City’s most vulnerable residents with housing they can afford, creating a stable, supportive living situation.

Following the ceremony both Elders Wilson and Bryant visited the Northeastern Conference office to greet and pray with the staff.