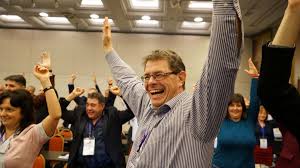 From News Releases, 19 December 2018  |  The Adventist denomination’s Trans-European Division (TED) faced many of the same issues as its North American Division when the TED executive committee convened for the 2018 annual meeting in Bečići, Montenegro, on 21-25 November. “You are not big in numbers but big in challenges,” Dr. Artur Stele, a vice president of the General Conference (GC), told the group. He expressed amazement that, in a context where thousands of young people are leaving some of the struggling economies in eastern and central Europe, where the church is aging in other areas, and where all religious groups are daunted by the increasingly secularized society, that the Adventist faith can grow at all.

Reports from the 14 Union Conferences and attached fields showed how the tide was turning in some areas. The establishment of more “centers of influence,” an emphasis on children’s and family ministries, and the development of discipleship classes in local churches, improvements in media outreach and the intergenerational “Church of Refuge” program are all playing a part.

Simon Martin, discipleship coach for Scandinavia joined with Gavin Anthony, president of the Iceland Mission, to share ideas about how to take new contacts not just to baptism, but into a committed, growing life of service in the church and community. There was also a report on emotional health, both for church members and pastors. Gábor Mihalec, a pastor and family therapist in Hungary, shared principles that can make church and community safer places and help develop balanced leaders. Plans are being made to develop more resources in this area.

There are areas of serious challenge. In some places dysfunctional individuals have pushed unbiblical views about the Trinity and other topics. Bible conferences, continuing education for pastors and elders, and other programs are being developed to help address these issues.

There is also concern that the discordant notes on the role of women in ministry and leadership are causing young adults and some older members to find church a difficult place to be. Hilde Huru, a lay representative from Norway, verged on tears as she shared, “Our young people are embarrassed to admit they are Adventists due to the way we force issues. Let’s not focus so much on these lesser essentials, but commit fully to mission. For this we need a flexible approach.”

Branislav Mirilov, president of the Cyprus section, noted that “we’ve been chewing this [the ordination issue] for 20 years. It is an issue of justice, an issue of conscience.” Along with many other speakers he emphasized the need to deal with these issues in a positive manner while keeping our main focus on reaching the lost.

Others spoke of where women leaders are badly treated due to a misinterpretation of the 2015 vote at the GC Session in San Antonio, despite GC President Ted Wilson’s statement following the vote that “nothing has changed” and women will continue to serve as pastors, local elders and deacons.

This discussion led to the voting of a four-point statement aimed at supporting women who serve in roles of leadership and ministry. It seeks to deal with issues, global and local, that can enhance the possibility for women to work effectively in the Adventist church.

The first recommendation is a request to the GC for it to make an official statement endorsing women in ministry and leadership. This would be a significant and encouraging addition to the many official statements of the denomination on a wide range of issues such as the nurture and protection of children, freedom of speech, gender issues, global poverty and a commitment to health and healing.

The recommendation states, “Given the current discussion in the world-wide Seventh-day Adventist Church regarding the role of women within the life of the church, which has an impact both internally and externally, we request the Officers of the General Conference to initiate the drafting of a position statement affirming women, and their role and contribution within the church at all levels, to be presented to the Spring Meeting 2019 of the General Conference Executive Committee for consultation and to be voted on by the full Executive Committee at Annual Council 2019.”

The Church Manual Committee is also asked to insert a provision which would allow for additional ministerial credentials to be created between GC Sessions with the understanding that they would be subject to ratification at the next Session when the Church Manual is updated.

The committee also fully endorsed a decision taken by the TED Sponsorship Committee to provide educational support that will make provision for 32 women to train for pastoral ministry over the next three years, providing them with a 75% sponsorship for room, board and tuition.

The TED has one of the highest proportions of female leadership of any Division in the worldwide denomination. It is about 14.5 percent.

“The Great Commission is all-inclusive. It is explicitly glocal, genderless, diverse, timeless and rich in beauty, anointed with the authority of God and blessed with the promise that Jesus Christ will be with us. It is relevant and transformative for the first century and twenty-first century.” Pastor Raafat Kamal, president of the TED, told the group in his message on Wednesday, 21 November. He took the group back to the Jerusalem Council in Acts 15 and applied the way came to a solution to problems of diverse cultures and differences over an issue that was not a fundamental doctrine: should Gentile Christians be required to follow all of the customs and rules of Judaism?

Many committees meet during the annual event, including Secretariat and Treasury in-service training, a consultation of the lay representatives, a nominating committee that filled two vacancies, the Newbold College board, and the ministerial training committee. There were also significant presentations from ASI Europe, Adventist World Radio, and the Adventist Development and Relief Agency (ADRA) Europe.  Of particular interest in the ADRA Europe report was the fact that while Europe only makes up two percent of Adventist membership around the world, it provides more than a third of the funding for ADRA. It was also noted the very significant leadership that the combined European communication team took in generating programming and responses for World Refugee Sabbath, highlighting the needs of the world’s most vulnerable.

The budget for 2019 was voted, roughly at the same levels as 2018. Financial planning for the denomination in Europe is necessary with the uncertainties of the United Kingdom leaving the European Union.

Dr. Helgi Jónsson, a psychiatrist, was elected as the new Health Ministries director. Originally from Iceland, where he currently practices, he has also served in the Danish health system. He is an elder in the Hafnarfjörður church, a Sabbath School teacher and has previously served as a member of the TED executive committee. Jónsson said, “I’m humbled by the calling to work for the TED. I don’t approach the task as a man that knows all the answers, but first and foremost, I want to get to know the people I will be serving and listen to their needs. I hope that my experience as a psychiatrist may contribute to the work. I aspire to be a cogwheel in a community that can become stronger together in the love of Jesus, so His love may be shown through us all to our fellow Europeans.”

Jónsson replaces Dr. Torben Bergland, who earlier this year was called to serve as an associate health director at the GC. Division President Raafat Kamal reminded the group of the TED health think tank meeting in 2015 that emphasized the need for an emphasis on mental health and also the health and well-being of our pastors.

Pastor Paul Lockham was elected stewardship director for the TED. He has served as a district pastor in the British Union Conference (BUC), as executive secretary in both the North England Conference and the South England Conference before being called to the same post at the BUC office. He served at the same time as BUC stewardship director. More recently he has served as associate secretary with primary responsibility for the pension plan and the needs of the churches in the Irish, Scottish and Welsh missions.

In accepting the position, Lockham said, “Christian stewardship is living in a trusting relationship with our gracious God, using our time, talents and treasures to touch the lives of others to build His church.” He replaces David Neal, who was recently appointed editor at Stanborough Press in Grantham, England.