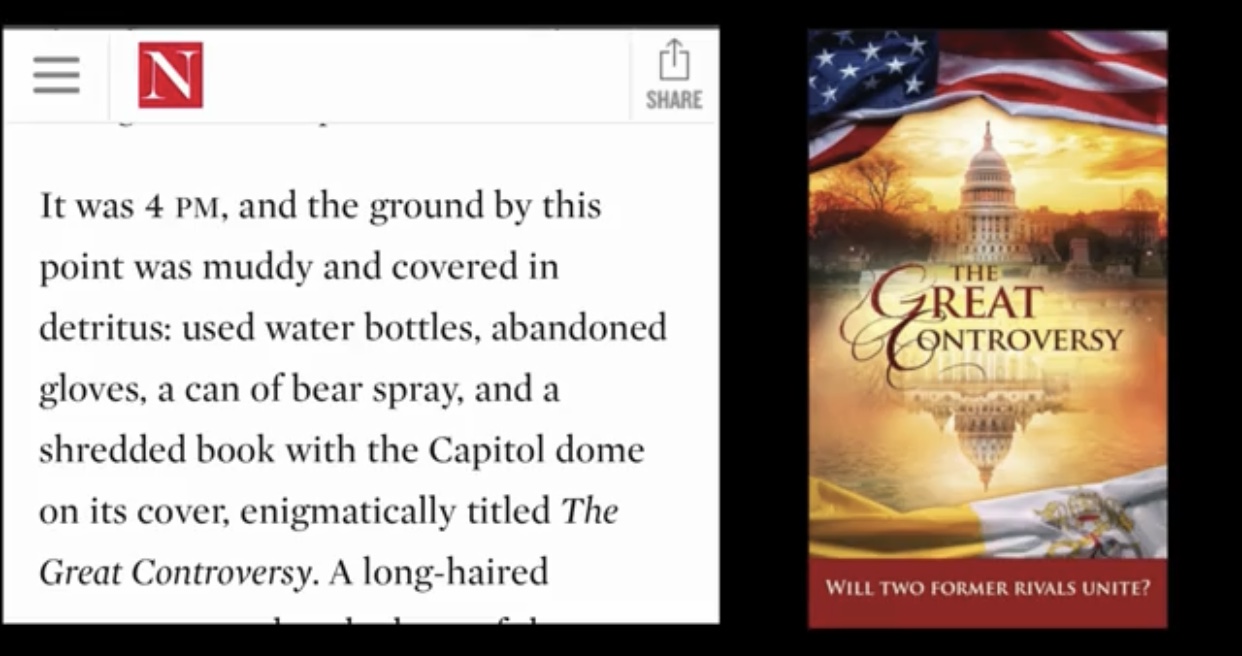 An Adventist group called The Forerunner Chronicles organized a massive Washington, DC-based effort to hand out copies of Ellen White’s The Great Controversy to the crowd at the “Stop the Steal” rally on Wednesday, January 6—the group that went on to storm the United States Capitol building.

The Forerunner Chronicles is an independent ministry headed by Christopher Hudson, known for fiery sermons uploaded to YouTube, and for numerous conspiracy theories about celebrities and the political world.

Forerunner Chronicles says it is “dedicated to declaring the three-fold message of Revelation 14:6-12. This message entails three heavenly proclamations symbolized as being declared by angelic agencies to the inhabitants of our world.”

Hudson has declared rapper Jay-Z a devil-worshipping Freemason and compared Obama to Hitler.

A self-described “pastor” of the Forerunner Chronicles, Hudson is not an ordained Adventist pastor.

He says on one of his videos that people in the crowd were fascinated when his team told them that The Great Controversy predicted that America would repudiate the principles of the constitution.

A GoFundMe fundraiser appears to have raised almost $15,000 for the book distribution event, that gave out copies of the Ellen White classic printed by Remnant Publications. The cover depicts the United States Capitol building alongside the title.

On the fundraiser page, Hudson stated:

President Donald Trump has announced that on January 6, 2021 there will be a massive protest in Washington DC! It is certain that the crowd will number in the tens of thousands.

Prayerfully, partner with us today as we organize an effort to distribute FULL VERSIONS of the book THE GREAT CONTROVERSY to the multitudes that are expected to be in attendance at this event!

Hudson has been described as the mentor of Angus Turner Jones, the American former actor best known for playing Jake Harper in the CBS sitcom Two and a Half Men. Jones converted to the Adventist faith in 2012 and eventually stopped appearing in the sitcom.

Soon after Jones announced his conversion to Adventist, the North American Division distanced itself from Hudson, stressing he was not a pastor and that Forerunner Chronicles was an independent ministry.

Nevertheless, it is clear that Hudson has a strong following in the Adventist community. The widely-recognized Adventist television ministry, 3ABN, has vigorously defended his ministry.