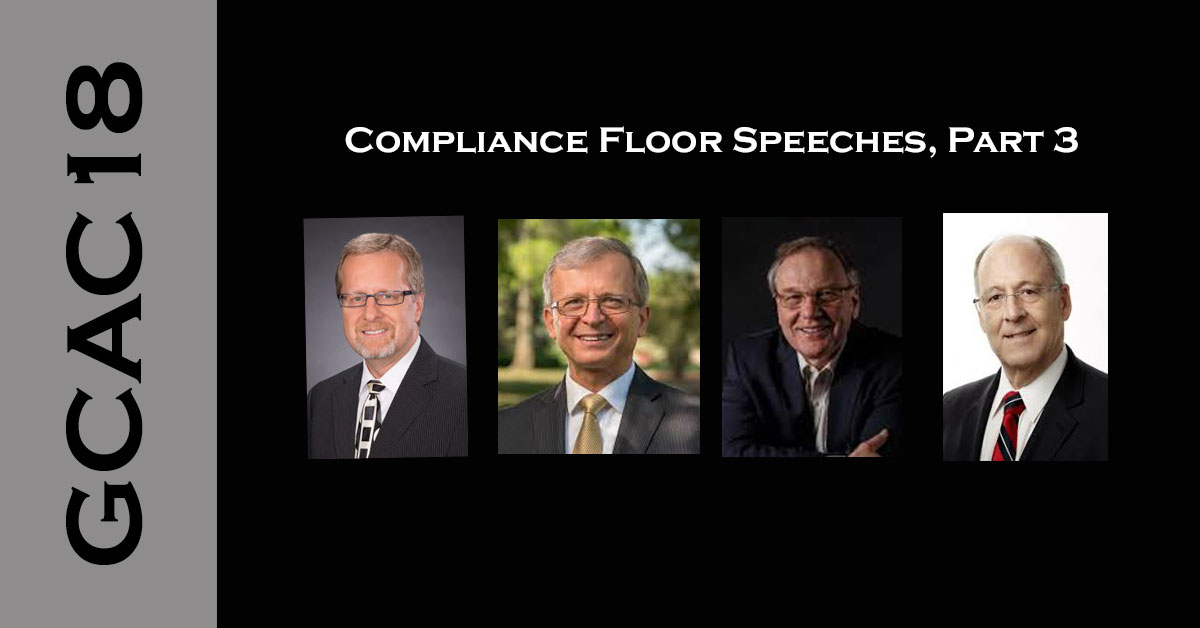 The following were speeches made during the discussion of the compliance procedures on Sunday, October 14.

Many of us have been praying about this process and the document before us today. I can assure you that I have been praying, and I am confident that you have been, as well. I am very interested in how, last year and this, the two documents—the one we considered last year, and the one we consider today—have reached this floor for discussion and vote. I understand that it is common practice for GCDO (the General Conference and Division Officers meeting) to process and vote on items to be placed on the Annual Council agenda.

The document we considered last year was approved by one vote—the narrowest of margins. That total was reached by allowing the votes of those who were not present to be counted. This year’s document passed with the next narrowest of margins: two votes. I understand that the vote was 32 in favor, 30 opposed, and two abstentions.

The reality is that, for two consecutive years, the GCDO votes have split almost perfectly into two factions one of the highest levels of governance in the Seventh-day Adventist Church. Such a split at the highest levels of our church’s structure underlines the kind of divisions that this approach to the issue has created at every other level of our church. Rather than being a unity process, it has been a disunity process.

I have, then, two questions about this year’s GCDO vote. One, in light of the fact that at last year’s GCDO meeting, people who were not present were allowed to vote, my question about this year’s meeting is: Did anybody leave the meeting early—before the vote was taken—and, if so, were they and others who were absent asked to vote and did their votes count? And two, were any others who were NOT GC or Division officers allowed to vote?

Finally, I appeal to my Annual Council colleagues to vote no on a process that continues to fracture us. As Christian brothers and sisters, we need a new and far more unifying process to replace it.

Thank you. I will listen for your answers to my questions.

Brother Chair: Thank you for this opportunity to share some thoughts about the proposed compliance policy with my fellow church leaders:

1. We are divided. We are divided in this committee and we are divided in our world field. Is it possible to find a bridge over this divide we are facing? A thought from the Desire of Ages: A great gulf developed between God and mankind. It was impossible for mankind to cross over to God. But where there was no way – God made a way. It was the cross. The cross of Christ bridged the gulf – Jesus holds out his hands to mankind and invites Him over. The gospel invitation is to come just the way you are, knowing that the power of love and acceptance will not leave us the same. The cross is the bridge to peace.

2. This is not a unity document. This is a discipline document.  Maybe, if it was named correctly I could vote for it. Maybe not – there are still many other problems.

3. Many members in the NPUC, those who have read the proposal, have written to me expressing dismay. I have more correspondence, emails and phone calls, on this topic, than any other issue we have dealt with in the church. It is not creating unity. They ask: Is this the way Christ would lead His church? My answer, from my heart is no! Does Jesus publicly shame people? My answer again, from my heart, is no! Is true Christian unity the same as compliance? No! Can true Christian unity be forced? From my heart, the answer is no! Is this really a unity document? No! Is this the best we can come up with? My answer, from my heart is no!

We can do better. We need to change our focus. Our focus should be to build a bridge to peace. Nothing can perfect unity in the church but the Spirit of Christ-like forbearance. I humbly submit today: We can and must do better than the proposal before us. We can, by God’s grace create a bridge, centered in Christ-like forbearance, that will bring peace and not harm to the church but lead it to become more Christ-like in how we relate to each other.

Several quotes I would have read if I had more time:
• “God never forces the will or the conscience.” Ellen White, The Great Controversy, p.591.
• “While force may secure outward submission, the result…is a more determined rebellion of heart.” Ellen White, Education, p.288.
• “Church force cannot press the church into one body. This has been tried, and has proved a failure.” James White, Signs of the Times, July 9, 1874, p.28.

As Seventh-day Adventists we are a prophetic movement, and are known as people of the Bible. It is imperative that it stays this way. The Bible is and must always be the highest authority and the judge in all questions of doctrines, life, and church activities.

For me, the major problem with the proposed document is the fact that the punishments are not built on a clear “Thus says the Lord,” on the plain biblical teaching, but on human and ecclesiastical reasoning. Therefore this proposal is in violation of the very important sola scriptura principle.

Second, the real issue is that the violations deal with in the document and in the set up of the committees carry a mixture of different levels of authority: doctrinal statements are mixed with ecclesiastical and financial policies. Thus, different items carrying very different levels of authority are put together and on the same level, and this is highly confusing, misleading, and wrong.

Third, our doctrines are built on a consensus of our community of faith, but Church policies on a majority vote. Our 28 Fundamental Beliefs are built on a clear biblical teaching and theological principles. However, each vote of the General Conference regarding the Church policy is subordinate to the Biblical authority.

Fourth, if we need to discipline duly elected leaders, it must be on the clear biblical-theological grounds, on the plain “Thus says the Lord,” and not on debatable biblical interpretation and ecclesiological foundations and authority.

Fifth, if we were to adapt this document and go this proposed direction, it would be the first time in the history of our Church that we punish our dedicated and committed leaders on nonbiblical grounds.

Sixth, this document creates an atmosphere of suspicion, fear and dubious checking on others, instead of generating trust and confidence. It will only distract us from the main focus on the proclamation of the biblical truth and will actually injure our unity.

So, out of faithfulness to Christ and the Bible, I speak strongly against this document. It lacks healthy balance and must be rejected on methodological, historical, missiological, theological and biblical grounds.

I am grateful for the opportunity of open and free conversation. That is church at its best.

As a physician, I ask the question “What is the cause?” when I’m faced with a problem. This is a difficult moment in our church. We indeed have policies in place, and that’s the landscape of this discussion.

I come from South Africa. I’m a white man from South Africa. I grew up under apartheid. My church winked at corrupt systems, and my collaborated, putting in parallel inequitous and iniquitous salary scales and pension benefits. Whereas our church never said a word, the Episcopalians and the Catholics push ed back. That’s the problem.

Change came when people were willing to speak and act their consciences, regardless of the consequences. This is the the diagnosis.

Women’s ordination is a problem which is here to stay. To date, despite the change in the system in South Africa, our church has never apologized for not opposing apartheid. I have done, I do. This past lead conference enlightened me on the strong voice of Ellen White against opposition and suppression and ignoring of rights. What’s that got to do with today? Everything. We have things in place to deal with dissidents. On yesterday’s platform there were two women. Our daughters asked us, “Have we made progress?”

I am deeply concerned that this document will suppress consciences that are being exercised and those that are being awakened. My plea is that we think carefully before voting it.