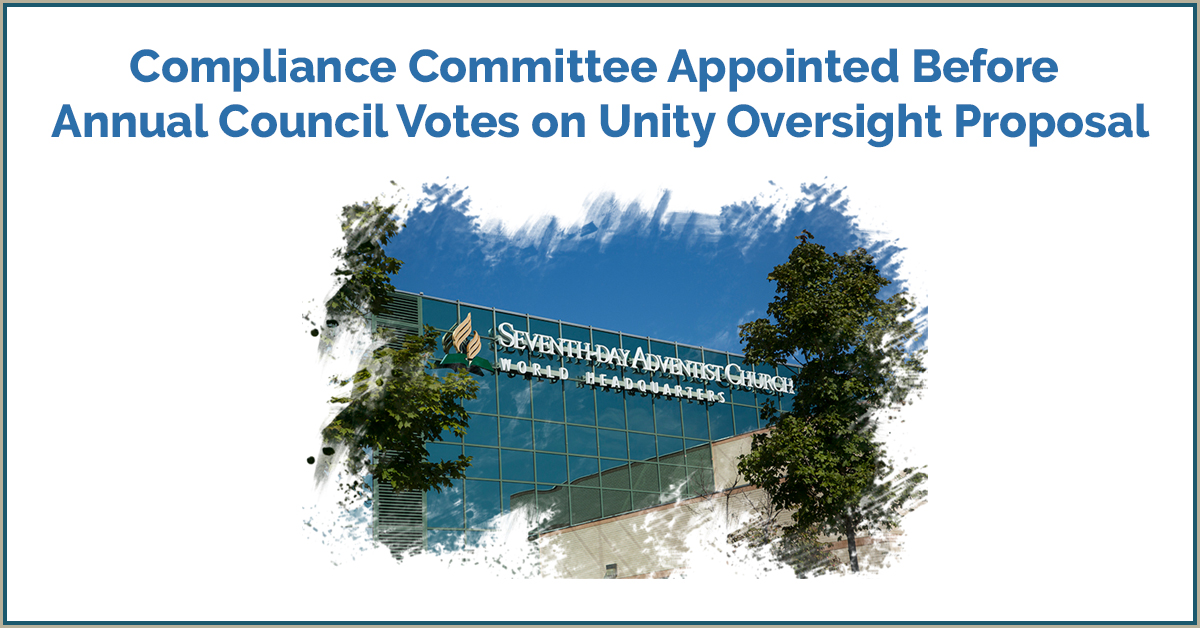 28 August 2018  |  The denomination’s General Conference (GC) Administrative Committee appointed five Compliance Review Committees two weeks ago despite the fact that the proposal from the Unity Oversight Committee will not be discussed and voted on until the annual meeting of the GC Executive Committee in mid-October. That proposal might authorize such committees, depending on its language at the time that it is voted. Last year a similar proposal was sent back for more development and not adopted by the Annual Council.

Adventist Today reported on the proposal in July when it was released:  https://atoday.org/administrative-committee-takes-step-forward-in-unity-process/

There are five committees because each is to focus on a particular sub-set of issues: (1) “core policies,” which evidently means primarily financial policies; (2) “teaching creation/origins,” which seems to relate primarily to higher education institutions; (3) “homosexuality;” (4) “distinctive beliefs,” which concerns doctrinal issues; and (5) “ordination,” which means the issues surrounding the recognition of women employed in pastoral ministry.

Each “Compliance Review Committee” has essentially the same task. (1) “Be comprehensibly knowledgeable and accept as authoritative” specific GC documents. (2) “Develop and recommend … guidelines that explicitly describe the conduct and behavior of denominational employees” and in some areas “organizations and institutions” regarding the assigned topic of the committee. (3) “Examine non-compliant entities as identified and recommended by the Administrative Committee of a union … division … or GC.” (4) “Exercise overview [of] issues that primarily are the administrative duty of unions.” (5) “After evaluating the results of … the voted compliance plan of the non-compliant unit(s) … recommend to the GC Administrative Committee  consequences.” (6) “Process appeals received from non-compliant unit(s) which do not agree” with the consequences.

Taken as a whole, this constitutes an unprecedented organizational arrangement at the denomination’s GC. There have been occasions in the past when a committee at the GC was assigned to investigate some issue in one or more union conferences, but never a permanent, generic structure such as that envisioned in the five Terms of Reference voted by the Administrative Committee.

Retired denominational administrators have told Adventist Today that there has long been discussion of when it is appropriate for the GC to get involved in a local situation. The consensus over the years has usually been that the GC should stay out even when the situations become widely known and controversial, according to these sources. Nonetheless, a few GC leaders over the decades became known for overreaching. Ellen White’s counsel at the time of 1901 GC Session, when the union conferences were first established has often been quoted, urging a decentralized denominational system. These men are asking, Have times changed so much? Are we going back to the pre-1901 situation?

What does this mean for Annual Council?

As the full picture of the five committees unfolds, it is difficult to know how this will affect the discussion and vote at Annual Council in October. The concern about compliance began with the issue of ordaining women employed as pastors, and the strong feeling of at least some GC officers that the union conferences should “stay together” on the practice of excluding women. Now four other types of issues have been added to the mix. How large an agenda of “compliance” is the GC leadership anticipating? How far will it reach? How much conflict and disruption can be anticipated with multiple committees conducting investigations and imposing “consequences”?

Adventist Today will soon publish more information about the five Compliance Review Committees that have been appointed, including the individuals assigned to each committee and their current positions and backgrounds.