I have spent much of my life in small churches. As a 4th-generation Adventist, I have filled many roles in at least 35 different Adventist congregations. A child, a teenager in an academy church, a typical adult in the pews, 5 years in full-time evangelism, nearly 30 years as a pastor’s wife, a lay pastor and a coach to churches and church plants.

In my youthful, zealous years, I assumed that declining churches were just missing certain ingredients. Commitment. Revival. Missionary spirit. That if those ingredients could be brought back, a church would grow again. But as the years passed and I failed to witness the extended turnaround of a declining church, the study of how churches grow and why they stop growing became very personal.

Our ministry was spent mostly in small to medium-sized towns, where the local church had passed the 50th anniversary of its founding. There were no Adventist institutions nearby to attract Adventist families to the area, and demographics and job opportunities led the children away from the church where they grew up. Still, members sacrificed to pay the bills, loved Jesus and wanted their church to be a light in the community. Some had active community service ministries.

Even where the numbers were relatively stable—a few baptisms occurred, balanced by those who left, moved or passed away—all, without exception, believed that they should be growing. And yet they weren’t.

Many reasons were given for the decline. “People around here are just not interested in the truth” was common. Also, “If we had the pastor full-time, we would grow.” The members, the pastor, the conference, each took their turn at being blamed. Sometimes it was a factory closing in town. Other times just normal attrition. But members always had an opinion.

The reality is, most churches in North America are declining, and many Adventist pastors will spend their entire career in churches that have passed (and will never recreate) their prime. If a charismatic pastor does manage to turn a church around by sheer force of will and personality, chances are good that once he is gone, it will return to its former decline within a few years.

When Adventist churches do close and cease, it leads to a feeling of failure and deep shame.

I encountered a similar dynamic when working as a hospice chaplain. I observed families with the same frantic need to change reality, no matter the cost to the patient—their loved one, and medical professionals that seemed to regard decline and death as a personal insult, to be resisted at all costs. I also saw families who gracefully accepted the diagnosis and made the most of the time that was left—honoring the patient, making them comfortable, including them in activities that kept them connected to and invested in future generations.

Did you know that many Adventist churches in North America would not even qualify to be churches if they had to meet the conditions that are required to establish a new church today? We have strict requirements to become a company and to become a church. But we have no policy to walk a church out of that status down to a company or even a mission group. Many churches now would not even qualify to be a company (regular attendance of at least 30, with annual tithe of over $30,000), but still call themselves a church with full privileges and entitlements, with expectations that the conference should staff and treat them as such.

I believe there is a reason why we find ourselves here. By failing to recognize and accept that churches have life cycles, we are trapped in a model that exhausts resources, pastors and members, while seeming to accomplish little.

Declining churches are often staffed with young pastors just coming out of college or seminary. The new pastor is brimming with new ideas and energy, which can be refreshing to the congregation. Or it can accentuate the tug-of-war that is all too common in declining churches. The pastor believes that this church holds endless possibilities, but to do so it must change. The church believes that in order to survive, it must not change. After the pastor moves on and the dust settles, the end result can be a church that has settled even deeper in resistance to change, even while adding to its core belief that it is supposed to grow and is failing.

The reality is, everything and everyone in this world, affected by sin, eventually dies. Nations and societies rise and fall. Businesses thrive for a time but then eventually lose their relevance and close their doors. People are born, reach their prime, then age and pass away. Trees and dandelions reach for the stars and fulfill their purpose by reproducing. But at some point, even they stop growing. Then, in their death, they pass on the organic material that they have collected through their lifetime, to fertilize and enrich the next generation.

It might be harder to recognize, but churches have a similar life cycle. By the time a church is 20 years old (unless it has a college or hospital nearby), it has begun to lose much of the energy and closeness between members that fueled its birth. Over the years, mission mode imperceptibly yet inexorably changes to maintenance mode. Programs and administration and facilities must be maintained, sometimes even at the expense of relationships. And even at the height of outward success, the seeds of decline are silently sprouting. You can tell which churches have reached menopause. They are no longer reproducing.

Does this mean that they are not fulfilling their calling? God told Adam and Eve to “be fruitful and multiply.” Yet at some point they stopped having babies. Were they being disobedient to God? Or were they still being fruitful by investing in future generations and assisting them on their journey?

Senior citizens have a different focus than teenagers. They don’t usually start businesses, take risks, adopt babies. But that doesn’t mean they have no value! Grandparents can have a major influence on future generations, offering the wisdom and encouragement that comes from life experience, while modeling acceptance of and grace during the declining years.

Grandparents don’t insist that all future generations come live permanently with them and eat their more limited diet and live their slower pace. They love to have them visit, but then send them home! They support them in branching out into their own lives, starting businesses, taking risks and adopting babies, under their own separate roof.

Is it possible that it is as unrealistic to expect churches to bypass the cycle of life as it is to insist that grandma reverse the aging process and take up skateboarding? Can we help the older, declining churches to find their role as a support and encouragement to newer, younger churches, rather than feeling like a failure because they are no longer growing?

Older churches tend to resent churches being planted within their territory. “Why can’t they come help us?” is a common response. They see it as taking away from them, rather than adding to their legacy and their future. What if a declining church could see a new church plant as a healthy part of passing the baton to the new generation and asked what they could do to help the new baby thrive?

We have, for the most part, adopted the model that to be a “real” church, you must have a “real” pastor and a “real” church building. Watch how quickly a new church plant begins saving money towards a building fund, because having your own building means you are a “real” church!

Consider the true story of a church plant in a major city. 50 people stepped away from their established church to reach people for Christ in their relatively wealthy suburb. 50 years later, they had sacrificed to build a sizable church building and a school building, sold the school building, built another school facility, pastors had come and gone, people had come and gone, the church had grown and then declined, and now they are back down to 50 active members. They hire a consultant to help them know what they need to do to reach their community for Christ. The answer? Spend multiple hundreds of thousands to remodel their now-aging building.

It is very possible that their building does need a facelift. And yes, lives were positively affected and people were helped during those 50 years. And maybe that is what it is all about. But is it possible that all the millions and millions of dollars that were spent on salaries and structures during that time in just this one town could have been spent differently, in a way that had more impact on the local community? After 50 years, would their town even notice or care if they shut their doors?

In the declining years, the dependence on the building as the anchor for identity comes into sharp focus. Because if the building is considered the pinnacle—the very definition of being a church—what happens when the declining congregation can no longer afford to maintain it properly? When keeping the building cleaned, mowed and maintained takes up all of the resources and energy of a declining church, the building has become the mission. But by then, the emotional investment in the structure can be such that to talk of selling the building for any reason, even to free up resources for mission, can create an explosion of epic proportions! It is like refusing to sell the 5-bedroom family home even when you are in a wheelchair and on social security and the roof is caving in.

Making peace with past and future

I believe it is possible and even necessary to make peace with your past and your future. To accept that change happens, and not spend so much time fighting the decline. We’ve all seen people who spend vast amounts of time and money on “reversing” their physical decline and appearance. What do they end up with? Eventually, the same as the rest of us.

I have also seen people who are joyful and vibrant, aging gracefully. What are they investing in? The next generation. Teaching, encouraging, laughing, listening. Showing them how to live and contribute in a world where loss and pain and decline are inevitable. Would it be possible to integrate this same mindset into aging churches? Joy at seeing new churches being born and grow? A desire to support them financially and with their prayers?

Can you see the members of an aging congregation selling their building and meeting in homes, so that a younger church in the area could be gifted with their resources? If decline were not interpreted as failure, how much less depressing would it be to meet in a home for fellowship and prayer and a meal, than to rattle around in a building that you can no longer even afford to maintain properly!

Can we step back and ask the hard questions? Are our expectations realistic? What can we learn from nature about the life cycle about the changing role of the church? We work so hard to maintain and reactivate declining churches. Is there a way to, instead, celebrate and affirm them while assisting them in knowing how to contribute to the next generation as they decline?

A senior citizen can view the move to a condo as an invitation to freedom and a slower lifestyle, or a demotion on the way to the nursing home. It is all in how the cycle is interpreted. 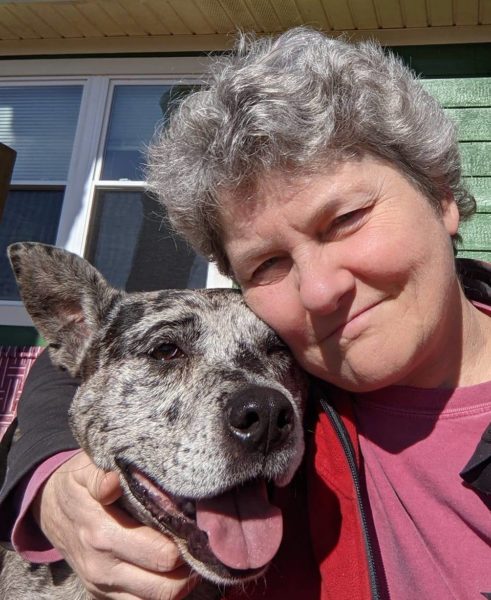 Linda McCabe (pictured here with Maggie) is an assistant auditor and treasurer trainer for the Georgia-Cumberland Conference. In her spare time she enjoys spending time with family, growing food and flowers on their mini-farm, biking, hiking and other outdoor activities.