Church Building Collapses and Kills 5, Including Child, in Zambia 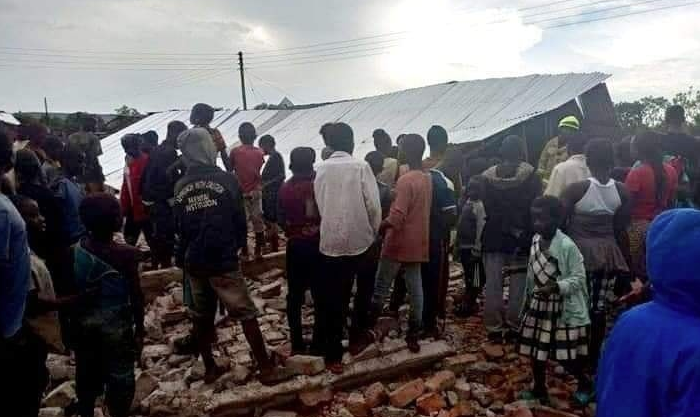 10 January 2022 | Five members of the Bethsaida Seventh-day Adventist Church in Kasama, Zambia, died when the church building they were in collapsed due to heavy rains on Jan. 8, 2022, reported the Zambia Daily Nation.

The incident, which happened in the afternoon, also left four church members injured. They were admitted to Kasama General Hospital.

Kasama District Commissioner Elizabeth Goma said three people, including an infant, died on the spot, while two adults later died at the hospital that evening.

Francis Mfule, a church member who survived the tragedy, said members were in the middle of a Bible study when the church collapsed following heavy rains.

However, the Zambia Daily Mail (ZDM) reported that the members who died were just seeking shelter from the downpour.

In the ZDM article, Godfrey Mwansa, executive secretary of the North Zambia Field of the Seventh-day Adventist Church, said that in keeping with Covid-19 guidelines, the church service had started at 1 p.m. and ended at 2 p.m. However, by that time, clouds had already begun to gather and some members felt that they would be soaked by the time they reached home.

“So those who tarried are the ones who met that tragedy after seeking shelter in the church,” said Mwansa.

The heavy downpour, coupled with a storm in the area, damaged the foundation of the church, which made interior walls topple over, reported the Zambian Observer.

“We found people trapped inside the building when we arrived at the scene and joined others who were trying to pull them out,” said Kasama Fire Brigade firefighter Hosea Mbao.

Mfule said that the church structure, built in 2020, was in an incomplete state.

Northern Province Minister Leonard Mbao challenged local authorities to inspect and make sure all buildings are fit for habitation.

“It has just rained for one week and we have been told that we are expected to receive more rains, so we need to be proactive and ensure that all buildings are inspected and certified to avoid further loss of lives,” Mbao said.

(Photo: Five members of the Bethsaida Seventh-day Adventist Church in Kasama, Zambia, were killed when the church building they were in collapsed due to heavy rains on Jan. 8, 2022. Photo via Zambia Digest Facebook page.)