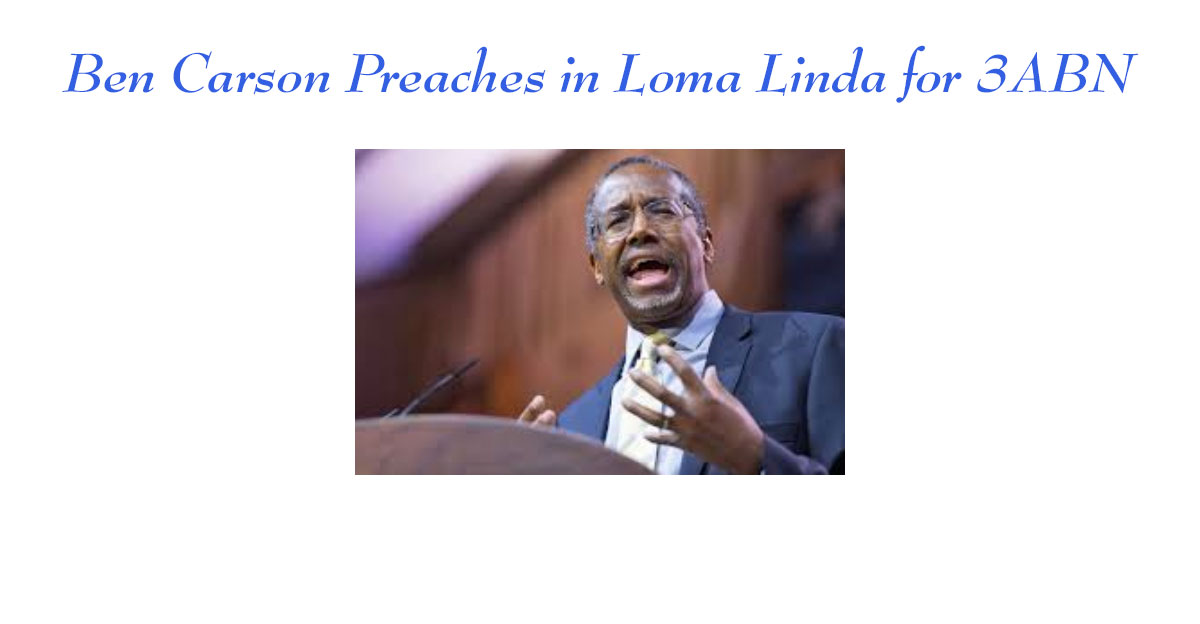 16 February 2020 | Dr. Ben Carson was the preacher for an Adventist worship yesterday morning in Loma Linda, California. He is the highest ranking Adventist in the United States government, known for running against Donald Trump in 2016 and then being appointed a cabinet officer by President Trump. He was raised an Adventist and was an active church member throughout a remarkable career as a pediatric brain surgeon at Johns Hopkins University medical center in Baltimore.

The Sabbath service was at the Campus Hill Church on the campus of Loma Linda University (LLU) as part of a “camp meeting” weekend organized by the Three Angels Broadcasting Network (3ABN), an independent television channel supported by traditionalist Adventists in North America. The theme of the weekend was “The Great Controversy: End-Time Deceptions.” His position was never mentioned in either the advertising for the event or as he was introduced.

Carson began his message with a question; “Who are we as Christians in the society in which we live today?” He continued with a clear statement that we need to take care of the poor and downtrodden in our society, not reproach them or just give them temporary aid. He quoted Proverbs 14:31 and James 1:27 to support his emphasis on Christians having a divine call to help the poor and oppressed.

Carson also briefly mentioned his view that simply providing assistance in the form of goods or money makes the poor dependent and does not enable them to climb out of poverty. At the same time he condemned the attitude that “they should pull themselves up by their bootstraps.”

He told some of his own story about being born in a disadvantaged, urban community and raised by a single mother. He said, “She did not want to be dependent on the government, so she worked two or three jobs as a domestic. Sometimes we only saw her on the weekend.” And he praised his mother for insisting that he and his brother learn to read and read books instead of watching television. He also mentioned how an eye examination when he was in elementary school made a big difference: “With glasses I went from an F student to a D student, but of course my mother was not happy at all. I kept reading and learning, and within a year and a half I went from the bottom of the class to the top of the class.”

Education is an important way to help the poor in Carson’s view, and he has started his own charitable foundation to encourage reading among children and education for youth. It is also true that in his references to helping the poor without encouraging dependence he alluded to complex issues for faith-based charities that seek to combat poverty and controversial government policy regarding education and social welfare.

As head of the U.S. government’s Department of Housing and Urban Development (HUD), Carson is deeply involved in the government policies toward the poor and he is influential among professionals in both government agencies and faith-based organizations. He has taken controversial positions.

He encouraged Christians to get involved despite the controversy they may encounter. “When you push the envelope, push things outside the box, expect to be criticized,” he said. “Don’t worry about that if in fact you are seeking wisdom and direction from God. That is what has guided me. Listening to the Lord and His guidance.”

He ended with a focus on the individual witness of each believer and their faith in Christ. He quoted John 3:16 and said we all have a sphere of influence. “You can influence people around you by the way that you live, by the way that you treat other people. Just do the right thing. Don’t worry about the political implications. Do what is right. God gave us directions because He loves us, and knows how we work. … He wants us to get the most out of life and to be happy. A person who loves Jesus can be happy under any circumstances.” He quoted Philippians 4:13: We “can do all things” in God because we serve a mighty God.”

Throughout his sermon, Carson carefully steered around the political issues that have been very controversial in recent months and throughout the period he has served in the Federal cabinet. One observer who knows Carson personally and has heard him preach over the decades told Adventist Today, “This is the same message I have heard him share many times.”

Pastor Mark Etchell, the senior pastor at the Campus Hill Church, prior to the service, told Adventist Today, “I serve in an Adventist community that includes members who are religiously wide-right and wide-left, and I counseled the 3ABN leaders toward moderation, so their ministry isn’t merely an echo chamber.”

Regarding Carson’s speaking in his church, Etchell said, “I didn’t choose him; I wouldn’t deny him.” One LLU School of Medicine graduate who’s heard Carson speak before, said this speaking engagement “is more muddy … given Carson’s role in the Trump administration.”

A young Adventist man walking in front of the Campus Hill Church said, “I’m surprised it wasn’t better publicized.” A member of the University Church, the other church on campus at LLU, said: “There wasn’t a speck of publicity.”

The congregation in the sanctuary at the church appeared to be about the normal size for Sabbath attendance at this time of the year. There was also a second auditorium in the church building where another crowd was connected by a video link. The Campus Hill Church is not the larger of the two churches on the LLU campus.