William G. Johnsson’s Where Are We Headed? Adventism after San Antonio 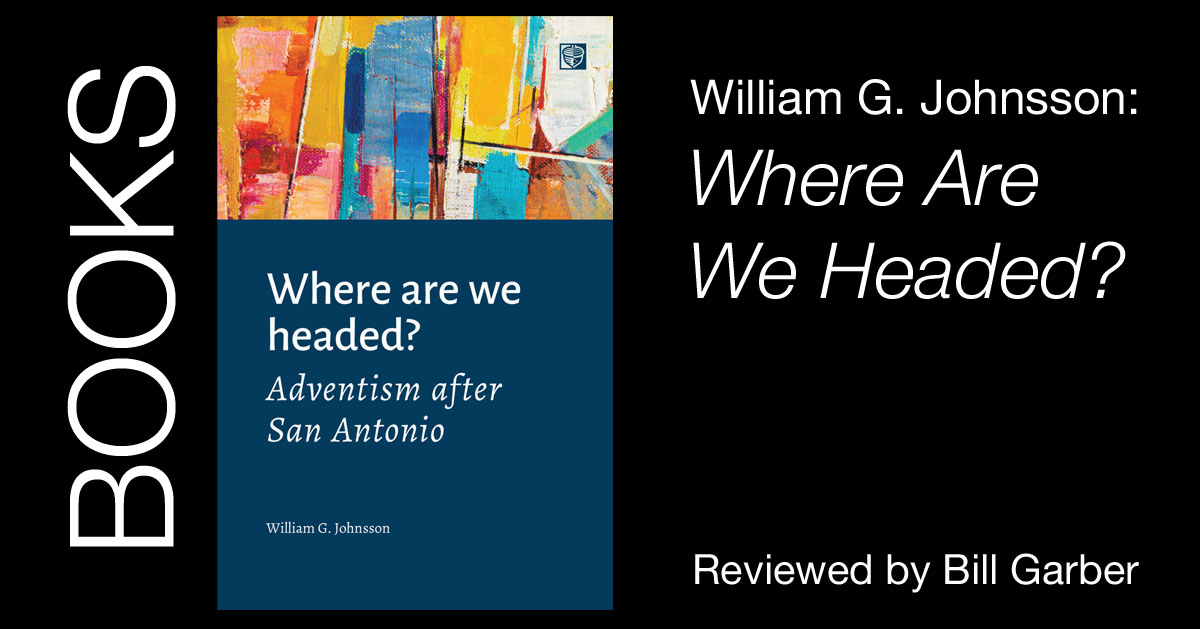 William G. Johnsson launches Where Are We Headed? Adventism After San Antonio straight from the shoulder. “San Antonio was a tipping point in the history of the Seventh-day Adventist Church. The General Conference Session of 2015 exposed and widened fault lines that had been developing for a long time. In later years the Session will be seen as a moment comparable to the 1888 Minneapolis convocation, when two views of the church, two possibilities, met face to face.”

The Session was no distant theoretical event for Johnson, though he did not attend. In the context of a lifetime of denominational employment, what he observed from livestreaming and reports by attendees ‘affected me profoundly,’ he explains, pointing especially to the way the matter of the ordination of women was handled. ‘For a couple of weeks after the Session. I moped and grumped around the house and generally made life miserable for my sweet-natured spouse. Then it hit me: Instead of fussing, do what you do best—write about it!”

And thus we have this short, vivid treatise listing ten contrasting ways of seeing ourselves within Seventh-day Adventism and Johnson’s hope for defusing the conflicts that are intensifying over the differences.

I’ll try not to spoil a good read by more than a little highlighting sufficient to give potential readers an insight into the author’s approach to advocating for the direction he believes church leaders and members will do well to follow.

For example, reflecting in his 9th decade of life, Johnsson takes a look at how we all tend to use scripture. “I think we can divide Adventist interpretation [of scripture] into two broad and contrasting camps—the ’flat,’ literalistic approach, and the nuanced approach.”  He observes that the ‘flat’ method remains the dominant approach across Seventh-day Adventism today, and confesses ‘I followed this method for years in my personal devotions, preaching, and teaching.’  But he now observes, ‘Looking back, I wonder how I could have missed the import of Ellen White’s profound counsel, that the Bible’s thoughts are inspired, not its words.  The ‘flat’ approach centers in words, not ideas.  I don’t wish to sound harsh—except on myself!—but that method is better suited to the Quran than to the Bible.”  The Quran is believed by Muslim’s to be verbally inspired, Johnson explains, while Seventh-day Adventists traditionally ‘have a dynamic view of truth,’ and ‘do not believe in verbal inspiration (dictation) of the Scriptures.’

In every point of contrast, he identifies the liberal, inclusive, open path as the path of Jesus.  Being in my eighth decade of life, I personally find him easily convincing, but Johnson is looking beyond to the Millennials who are the near future of the church.  And he laughs with them at today’s church leaders of a denomination sustained through its first 60 years of existence by the presence of God in the life of an inspired women.  It is laughable, he agrees, that leaders cannot bring themselves to find biblical support for her position as a ministerial-credential-carrying female recipient of a full minister’s salary for more than 50 years.  As Johnsson notes, ‘In any battle laughter is a powerful weapon.  When people can laugh in a difficult situation, they are already a good way along toward winning.  Laughter shows that they have taken the long view and know that, although the immediate scene is dark, the end will be bright.”

Across each of the ten points of dissonance Johnsson identifies within the denomination, he never loses sight of a bright future for the church.

While he doesn’t make it the focal point, we learn much of the human side of his denominational employment, starting with 15 years in India as a missionary.  He and Noelene were invited to India as a couple, during their senior year at Avondale.  They were not even engaged at the time of the invitation, he writes wryly.

I recently enjoyed a long Sabbath evening with friends, two of whom were students at Vincent Hill School when Johnson was boy’s dean and a teacher there.  Joe, whose primary congregational spiritual engagement for the last forty or so years has been weekly Alcoholics Anonymous meetings, told of asking the young Johnsson why he always asked Joe to tend to the Johnson’s children when the parents were away at faculty meetings.  “He told me that it was how he could know where I was while the Johnson’s were out of the dorm during the faculty meetings,” Joe noted with a smile. Perhaps readers will see that kind of practicality in attempting to address the face to face pressure points Johnsson sees Seventh-day Adventism facing.  I did.

But this book is not to be attributed to a grumpy old retired church employee unburdening himself of a career’s worth of silence for the sake of his continued employment.  Not at all.  He was hardly silent across his career.

Johnsson shares liberally from a wealth of inside-the-church experiences as a child, a student, a teacher, a Seminary professor, a long-time board member of the Review and Herald Publishing Association, a leader of Interfaith and Interchurch engagement for the General Conference of Seventh-day Adventists, a regular General Conference delegate across several decades, and of course for nearly 25 years he worked for three General Conference Presidents as editor of the Adventist Review, the denomination’s magazine that traces its direct lineage to that ‘little paper’ James and Ellen White founded and titled The Present Truth.

It is, of course, The Present Truth that is something of a namesake for Adventist Today, and should you order a copy of Johnson’s book by clicking here, which for now is only available in Kindle form, the royalties from Where Are We Headed? will go to a worthy ministry, Johnsson assures you in his book.