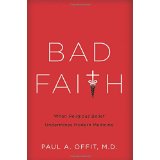 Reviewed by Edwin A. Schwisow, July 28, 2015:     I live in a “liberal” state on the “Left Coast,” where the separation of Church and State is normally profound and sacrosanct. It is here that I became acquainted with several families who hold founding membership in the Followers of Christ Church, which prohibits its 1,000 or so members from seeking medical treatment other than through prayer and anointing by/with a pastor or religious healer. Several Followers of Christ parishioners I have known personally in those families through the years have died prematurely from preventable conditions, such as high blood pressure/stroke and adult-onset diabetes. A number of their offspring have died from devastating infections that could have been arrested with antibiotics. And it is here, in a small, religious population where the child death rate stood at 26 times that of the general population, that a conscientious prosecutor finally declared “Enough!”

(In acquiring the book, I was fascinated, as well, by the similarities between some practices of deeply conservative Adventists and the Followers of Christ. Members of the Followers of Christ not only practice baptism by immersion, but also communion that includes ritual washing of feet, and they restrict their Bible study to a literal reading of the King James Version. Church authority is highly male-centric and a great deal of stock is placed in repentance and good works as pathways to merit and salvation. Those who are deemed to fall short of essential godliness are shunned.)

That my father was a missionary physician and that I personally know several members of this congregation, a mere 30 miles or so from my home near Sandy, Oregon, prompted my interest in this informative and emotionally wrenching book, written by a physician, primarily about the conflicting religious and legal aspects of faith healing among those who believe seeking conventional medical treatment is a denial of the power of God.

I have personally pled with members of these families to use modern medical science as they would the foodstuffs in a grocery store—if and when they need food in the house, do they not go to a store and buy it? Yes, God has promised to supply all our needs, but he often does so through a grocery store or even a food bank. Is God limited in His power to heal, and must He confine himself to prayer and anointing alone as agencies of His blessing? Can He not also employ the ministry of dedicated Christian health-care workers? I suggested the names of several Adventist nurse practitioners and physicians in the area.

“No,” came the reply. “The Bible clearly tells us that healing for a Christian comes exclusively through prayer and anointing. There is no such literal command in the Bible regarding food. (Apparently the same literal application cannot not be associated with Philippians 4:19, which promises complete sustenance (not just healing), with no preconditions: “And my God will supply every need of yours according to his riches in glory in Christ Jesus.”) Apparently at least some temporal effort must be invested to achieve the blessings of God.

Soon after this conversation, I learned by phone that an observant member of the Followers of Christ I had grown to know and love had suffered a devastating stroke at age 69. Yes, he had developed high blood pressure, and no, he had not sought traditional medical help for that condition. About a month after the stroke, he died an invalid in a nursing facility.

Then came the death of his son-in-law at age 47, from the effects of diabetes, a condition that had gone untreated through conventional means. His devastated widow assured me that in both cases (her father’s and husband’s deaths) everything had been done within the faith-healing tradition to restore them to health, but now the family (despite the serious economic impact of their loss) was resigned to their deaths (though she herself told me that she was very tempted to seek conventional treatment for her own diabetic condition, in the wake of her husband’s death). She told me, however, that were it to become known that she had sought such treatment, she would be seriously disciplined by fellow members, and she trembled at the prospect of being disfellowshipped.

The author respects those who believe strongly in the power of God to bring healing, but through anecdote and analysis faults extreme belief systems for failing to also factor in the role of competent human assistance, especially in cases of the under-aged.

In fact, the string of deaths among members of the Followers of Christ during the past 30 years has galvanized interest in those, like the Followers, who unflinchingly deny their members any moral grounds for seeking conventional health-care. In their experience, true healing comes exclusively from on High, and this exclusive reliance on divine healing seems to affect other manifestations of 19th-century denominational Protestantism, such as Jehovah’s Witnesses, who absolutely deny their members any moral concessions to receive transfusions of blood, even in cases of life-threatening anemia.

According to Bad Faith: When Religious Belief Undermines Modern Medicine, faith healing has always attracted “bad faith” practitioners who for purposes of controlling others, impose draconian behavioral restrictions. The strength of the US’s laws separating Church and State have paradoxically allowed such personalities to present themselves as benevolent healers and spiritual guides.

Yet the outgrowth of such arbitrary restrictions on members has always seemed to produce social stunting and physical detriment. Today the Followers of Christ have no pastor or leader and have reduced attempts to attract new members in the Portland area. The congregation is apparently (and tragically) dying out at a fairly accelerated pace, in part because of the religious injunction against seeking traditional medical treatment.

That the Followers of Christ hold several unusual beliefs in common with Seventh-day Adventists piqued my early interest. Without the ministry of Ellen G. White and the emphasis on lifestyle improvement and enlightened healing methods, could our denomination have drifted into a Followers of Christ/Christian Science mentality during its early stages? I believe this could have happened quite easily. It was no secret that early medicine in the US was seriously ineffective in healing many illnesses it claimed power to vanquish. A charismatic leader like Ellen White could have righteously spoken out against medical science of her day, then left it at that. But in her case she envisioned enlightened medical practice as a “right arm” of gospel proclamation, and this provided an early balance in the denomination between science and faith, working together for mutually valued goals. Today there seems to have emerged a stronger tension between so-called “liberal” scientific Adventism and traditional “conservative” Adventism that seriously questions the veracity of any scientific information that seems to contradict literally interpreted Bible statements. But by and large, the linking of medical science and gospel proclamation has been a key to the rapid numerical advance of the denomination throughout the world.

But this does not resolve the religious liberty question of what to do in the many cases where the lives of children are used like the handling of poisonous serpents to test the faith of their parents. Should caregivers be prosecuted for failing to invoke the help of conventional health-care in cases of life-threatening illness? The author sympathizes with that view as one of the only ways to help break the powerful hold of charismatic teachers who even in death wield powerful sway over their flocks, compelling them to submit to draconian prohibitions and practices that bring suffering and death untold, in the name of God.

Adventists: The Most Diverse Religion in America Whatever Happened to Submission?