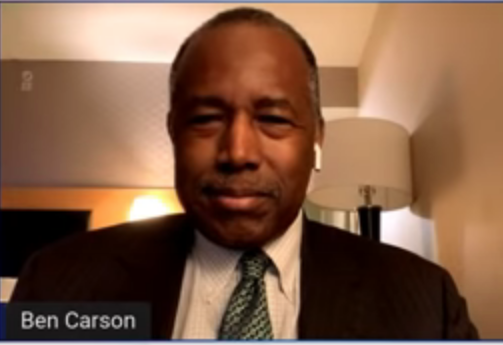 “A lot of people think it’s about vaccines and vaccinations,” said Carson on the program. “It’s a much bigger issue than that. Remember that many people came to [the United States] early on to try to escape from governments and monarchs who were always mandating things.”

Recently in the United States, President Joe Biden revealed plans that mandate all employers with more than 100 workers to require them to be vaccinated or test for the virus weekly, affecting about 80 million Americans. About 17 million workers at health facilities that receive federal Medicare or Medicaid also would have to be fully vaccinated, according to an Associated Press article.

Biden also is requiring vaccination for employees of the executive branch and contractors who do business with the federal government — with no option to test out. That affects several million more workers.

The former Republican presidential candidate said that mandates “have no place in a country that is supposed to be the land of the free where people are able to make choices.”

Carson also made it clear that he did not think all such vaccinations were necessary.

“We can’t let politics and ideology invade the laboratory,” said Carson. “We take people who have natural immunity, who’ve already had COVID, who have antibodies, and we say, ‘That’s not good enough. You still have to have the vaccination.'”

The program that Carson was on, which was first reported on by the Washington Times, was called the “Liberty of Conscience Document: Official Release and Global Appeal” live event.

According to the Liberty and Health Alliance website, they “are not organized for the purpose of carrying on propaganda or participating in partisan politics.”

Other videos on the Liberty and Health Alliance website have titles such as, “How to get a Vaccine Exemption… Your Questions Answered,” and “Re-declaring Independence! Will YOU stand for liberty of conscience in an age of vaccine coercion?”

The Liberty and Health Alliance also states that they “exist exclusively for religious purposes to support the mission, ministry, and message of the Seventh-day Adventist Church.”

The official Seventh-day Adventist Church position on immunization states in part: “We encourage responsible immunization/vaccination, and have no religious or faith-based reason not to encourage our adherents to responsibly participate in protective and preventive immunization programs. We value the health and safety of the population, which includes the maintenance of ‘herd immunity.’”

But it also said, very boldly, “THE DECISION TO BE IMMUNIZED OR NOT IS THE CHOICE OF EACH INDIVIDUAL, AND SHOULD BE TAKEN IN CONSULTATION WITH ONE’S HEALTH-CARE PROVIDER. PERSONAL RESEARCH ON THE SUBJECT IS IMPORTANT. WE ULTIMATELY RELY ON FOLLOWING BIBLICAL HEALTH PRACTICES AND THE SPIRIT OF PROPHECY, AND FOLLOWING GOD’S LEADING IN OUR LIVES, WHICH WILL BRING US PEACE AND ASSURANCE IN OUR DECISION-MAKING.”