Aunt Sevvy, My Son Told Me He’s an Atheist! 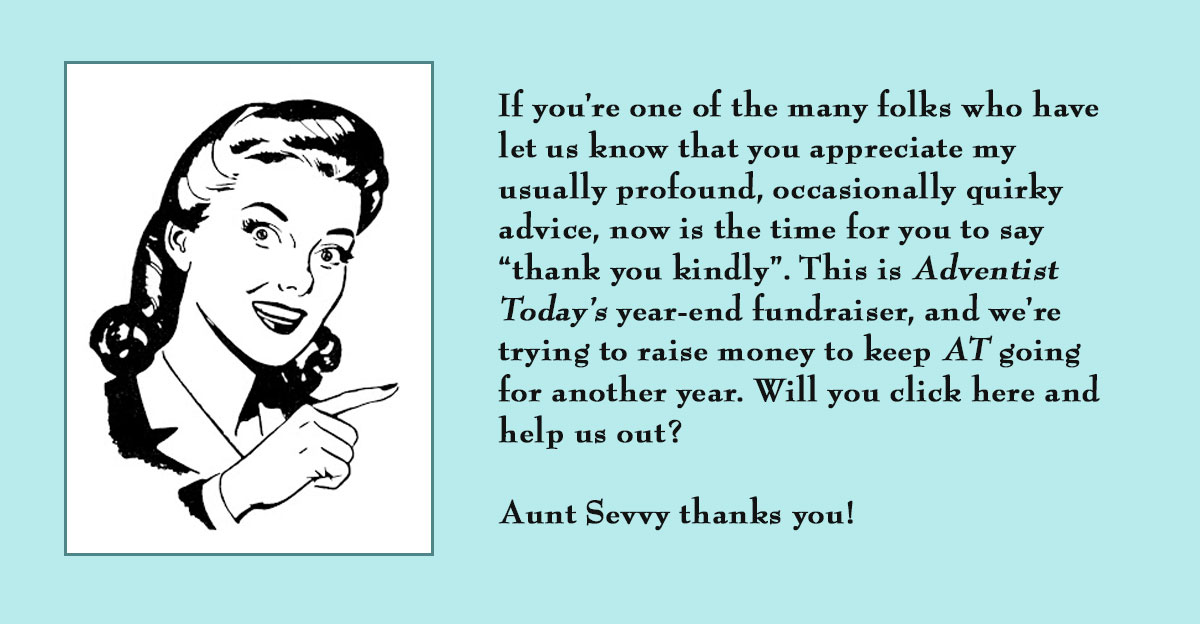 I have been trying to encourage our adult son to return to church. He always had excuses. Until recently when he said to me, “Mum, we’ve been over this many times. It’s time I told you the truth: I’m an atheist.” It was as though the bottom dropped out of my world. We did our best—family worship, always in church, 16-plus years of Adventist schools up through college and graduate school. I am trying to accept that I will not see my son through eternity, and what the Lord will say about the sheep he gave me.

Allow yourself to grieve for the loss of what you hoped for your son. If you believe you won’t see your son through eternity, it is okay to mourn. No one can completely erase your grief, but here are some things Aunty would ask you to think about.

First, you are not responsible for the choices of your adult son. That is an unfair and unrealistic interpretation of some out-of-context Bible verses. You trained up your child the best way you knew how. It is time to release yourself of the responsibility of that burden and allow your adult son to decide for himself, as we all must choose for ourselves what to believe. You can’t control your son’s choices, only your own.

Second, your son likely grieves that he is causing you pain, which is why he made excuses about not attending church instead of telling you sooner. He wants to be accepted by his mother as much as we all want that acceptance from our loved ones, and this change in his faith doesn’t change that. Pray that you will have the grace and strength to show him how much you love him, no matter what he believes, or doesn’t.

Third, I hope you realize that trying to convert him or pressure him back into the faith will just create more distance in his relationship with you. Christ’s love for us is unconditional, and we should try to follow his example. If anything can restore his faith, it’s going to be your allowing him the emotional freedom to find his way back to an openness to God. Even if it doesn’t, Aunt Sevvy is always a proponent of love and acceptance as a path toward healing relationships. So let him know that you support him and are his biggest cheerleader.

Finally, Aunt Sevvy believes something that may not be typical of Seventh-day Adventists you meet, but since you told your story to me so honestly, I’m going to tell you honestly what I believe. I believe that our God is very good and very wise, that he sees through people’s genuine doubts, and can save the honest in heart even if (for reasons we don’t understand) they reject the idea of God. I believe that sometimes people think they’re rejecting God, when they’re only rejecting religion. And I fully believe that there will be many people in heaven who thought they were atheists or agnostics, but in their hearts they were honest and true, and God knew that.

I can’t speak for God, but I can say that’s the only kind of God I can believe in.

May God comfort you, and keep praying for him,
Aunt Sevvy

My pastor is preaching someone else’s sermon, Aunty!

Do I need to be legally married to be welcome in the church?