At Last: A Fresh Re-assessment of the Entire Issue of Ordination (Men and Women) 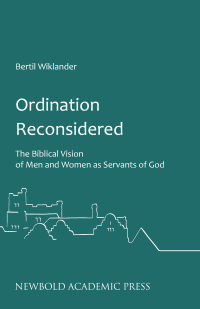 By Reinder Bruinsma:   A review of Ordination Reconsidered: The Biblical Vision of Men and Women as Servants of God by Dr. Bertil Wiklander (Newbold Academic Press, June 2015) Available through Amazon in paperback and eBook.

For many decades the Adventist theology of ordination has been in desperate need of a biblical revision and clarification. Dr. Wiklander’s book offers a comprehensive and innovative discussion and a thoughtful re-assessment of the current theology and practice of ordination in the Seventh-day Adventist Church.

The above quotation, taken from the back of the book cover, is a concise but fitting description of this interesting, thorough and well-structured study, that, in spite of its academic level, is very readable—also for readers without any advanced theological and linguistic background.

The book is based on a much lengthier document that was produced in the context of a study of the ordination of women (WO) in the Seventh-day Adventist Church, and was submitted by the Trans-European Division of Seventh-day Adventists to the GC-initiated, international committee that studied the question of women’s ordination (TOSC). However, it has been totally rewritten in a form that makes it easily accessible.

The special merit of this book is that it very successfully places the issue of WO in a wider context—more than many other studies have done thus far. The publication of this work is, therefore, an important contribution to the WO-discussion in the church. It will help the readers to see this wider context, which many may thus far have missed. The overall context is, according to the author, the mission of God.

Wiklander, who recently retired after serving nineteen years as the president of the Trans-European Division, has a scholarly background. His expertise is, in particular, in Old Testament studies and biblical languages. He earned his doctorate at the reputable Swedish Upsala University. He is therefore, without any doubt, well qualified to write a book such as this. In it he deals with the issue of Women’s Ordination by thoroughly exploring the general topic of ordination—biblically, theologically, linguistically and historically (general church history and SDA history). His conclusion, that ordination, as it is practiced in contemporary Adventism, has poor biblical credentials, is well argued. The aspect of the laying on of hands receives due attention in this study. Wiklander’s conclusion, that the Bible emphasizes how God calls people, and that people, c.q. the church, can merely affirm this divine call, is very credible. His stress on the charismatic aspect of being assigned a special task in God’s mission, rather than through any ecclesial induction into a church office, is a thread that runs through the entire book.

Another thread is the Bible’s unambiguous support for gender equality as a principle that is basic for the fulfillment of God’s mission. This, together with the rejection of any dichotomy between clergy and laity, lays the basis for the conviction that God requires equal treatment of men and women—with equal status—in the church. The ‘problem’ texts that, in the opinion of many, suggest an unequal status (‘submission’ of the woman, ‘headship’ of the man, etc.) are dealt with thoroughly and convincingly.

Many details of Wiklander’s arguments hinge on linguistic choices. His explanations are quite easy to follow and are quite convincing. Although many readers may not be sufficiently competent in the area of biblical languages to arrive at a definitive judgment themselves, Bertil Wiklander’s expertise as a scholar in these areas is everywhere apparent and merits their trust.

Sketching the various cultural milieus in which the Bible originated (and similarities in other cultures) is very helpful. Wiklander argues that many aspects of these cultures ran contrary to God’s original missional plan. The divine principles of full gender equality were, however, never abandoned, but God temporarily ‘tolerated’ certain aberrations (such as patriarchy and other forms of male dominance). He refers to the parallel between historically conditioned gender relationships and other phenomena, such as polygamy and slavery.

Within this wider context the author arrives at the logical conclusion that the ordination of women should not only be permitted in the Adventist Church, but is required, in view of the mission of the church, and in view of the fundamental, and eternal, biblical truth that all believers are ‘a kingdom and priests,’ regardless of gender. This leads Wiklander in an appendix to suggest a number of ways in which the current ordination practice in the Adventist Church might be revised, in order to make it more biblical.

The book, regrettably, comes a little late, just days before the General Conference session in San Antonio actually began. But it will be available in the GC Book Center and in various other places (the Newbold College booth and the Adventist Today booth) in the exhibition hall at the conference. In any case, it will, remain an important source in any further discussion on the ordination topic that will, no doubt, continue after the current GC session.

The newly founded Newbold Academic Press is to be congratulated for this superb publication. It can be seen at their booth in the exhibition hall, and copies are available for sale at the Adventist Book Center.