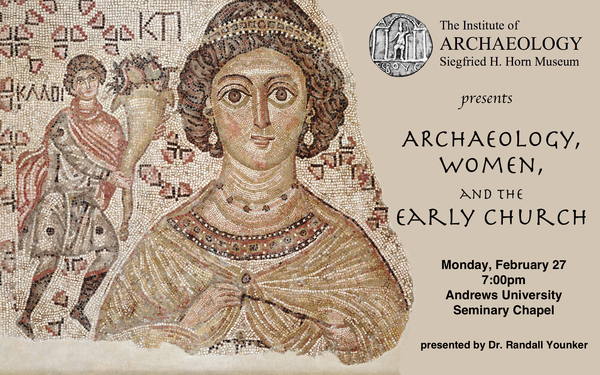 March 2, 2017:      Dr. Randall Younker, an archaeologist at Andrews University, gave a presentation Monday evening titled “Archaeology, Women and the Early Church.” He focused on the presence and impact of women in the early church, as well as the changes that took place over time. Younker is a faculty member at the Seventh-day Adventist Theological Seminary, director of the PhD program in Biblical and Ancient Near Eastern Archaeology and the Institute of Archaeology.

Younker’s interest in this topic was piqued by a discovery at a site where he was working with Andrews University students in San Miceli, Sicily. [See note at the end of this story.] One of the excavation sites is centered on a Christian basilica that dates to the fourth century. Approximately one hundred years ago, an archaeologist began exploring this site; however, it has been left untouched since then. Younker’s team discovered that a woman was buried in a prominent area within the church. “She was very rich. She had a gold necklace. She had a gold diadem for her head. She had gold earrings,” Younker said. The woman must have been an important member of the congregation, Younker explained, because “she was buried next to the priest in the front of the church in a very prominent place. … They had her buried right under the altar.” Other women were also buried in the church, where priests and bishops would normally be buried. Women were clearly important to this congregation, Younker determined.

To further investigate the question of women in the early church, Younker began looking at Roman society more broadly. In Rome men outnumbered women by a ratio of 130 men for every 100 women. Infanticide was a major contributor to this skewed ratio because families often discarded baby girls but kept baby boys. Christians on the other hand, valued all life, so Christian families raised both their daughters and sons.

Because of Christian values and because women could hold leadership positions in the church that they could not hold in wider Roman society, the number of women in the church grew significantly. Using statistical growth rates and other data, Younker said the Christian community would have likely been at least 60 percent women.

Documentation of persecution also helps shed light on the experience of women in the early church. Rome did not generally wipe out entire Christian communities. Rather, they arrested and killed the leaders, believing the other members would then disperse. Younker’s team found more female than male martyrs in Sicily. This could be for a number of reasons, including that more women were in leadership than men. These trends have been reported in other areas outside of Italy as well.

Additionally, wealthy women played an important role in funding the church. Of the 25 earliest churches in Rome, nine properties were donated by women. It is possible that the woman Younker described in the San Miceli church was a benefactor in this manner.

Art work discovered by archaeologists also presents insights into the early church. For example, paintings and sculptures show women holding scrolls and pointing with two fingers, which signified that they were teachers. Some of these were defaced later, with the two fingers being broken off, presumably with the intent of hiding the history of women in leadership.

Speaking directly to the question or ordination, Younker said ordination for church positions does not appear to have been regularly practiced until the mid-third century. However, there is evidence that women were eventually ordained along with men. Ordination of women slowed after the fourth century and came to an end by the 12th century, partially because men took over positions as the smaller house churches gave way to larger cathedrals when Christianity became more widely accepted and politically powerful.

Younker reported an exchange between Bishop Atto of Vercelli (885-961) and another leader. Bishop Atto was apparently surprised to find a description of women in leadership, and he wrote to his colleague to inquire about this. The response stated women were ordained in earlier periods.

In the question-and-answer session that followed Younker’s presentation, fellow seminary professor Dr. John Reeve emphasized that context such as Younker had provided is important for biblical interpretation. Both linguistic and cultural features are helpful for understanding a Bible writer’s message. Younker and Reeve appeared to agree that Adventists need to carefully study context rather than merely try to proof-text a given position as though the text had no social or historical setting. Younker expressed a desire for Adventists to consider recent scholarship regarding the history of women in the church as the denomination continues to debate the role of women in ministry today.

[1] “Rediscovering San Micelin,” a PDF of the report on the archaeology project is available here.