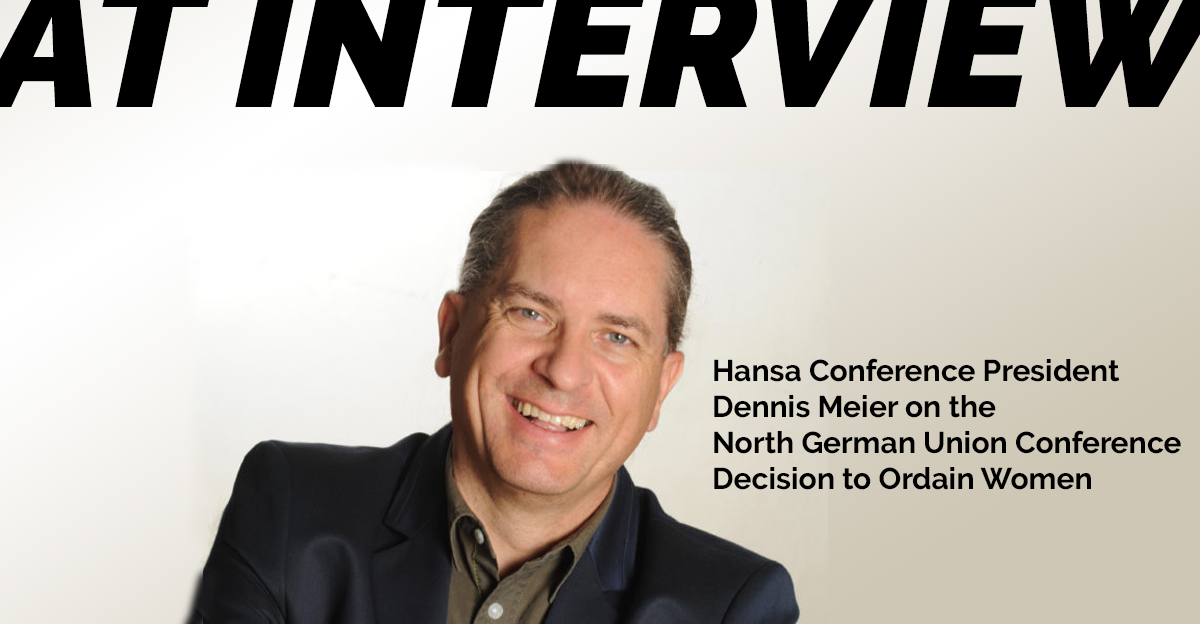 Dennis Meier has been president of the Hansa Conference, the northernmost conference in Germany, since 2013. Adventist Today editor Loren Seibold reached out to him to ask about the North German Union Conference’s (NGUC) recent decision to ordain both women and men in their field.

AT: When did the NGUC first take up this issue?

Meier: I believe our union may have been the first to vote to ordain without regard to gender. A layman made that motion in April 2012 at the regular quinquennial session, which passed with an 85% margin. The North American Division’s Pacific Union Conference and Columbia Union Conference followed.

But from the time we voted it until San Antonio in 2015, the decision wasn’t implemented because we didn’t have even one female candidate ready for ordination! Some believed our holding back was out of respect for the division and the rest of the world church—and there was justification for seeing it that way because we certainly never intended to offend anyone. Yet I think that had we had even one female candidate, we would have moved ahead with her ordination.

What changed at San Antonio?

After the contentious discussion in San Antonio and the apparent defeat of division-based women’s ordination, several church leaders, including ours, explored the no-man’s-land between compliance to the General Conference (GC) vote and compliance to our own voted actions.

Since we Germans are generally good at small print, we found wiggle room in the policies—or so we thought. The NGUC Executive Committee voted that we stop ordaining altogether: that we pray a blessing over our ministerial candidates and give them commissioned ministerial credentials. (Commissioning was a concept largely unknown to us hitherto.) A number of our young pastors have been thus set apart, including one woman: Pastor Jessica Schultka, since 2015, editor-in-chief of the German publishing house.

Of course, our motive wasn’t just to be clever; it was a sincere attempt to stay connected to the world church, of which we want to be an integral part.

Did that satisfy the General Conference?

Not at all. You’ll remember that in 2019 the General Conference leaders introduced an unanticipated action of censure to the GC Executive Committee against the leaders of the German church and five other unions in Europe and North America. (They had given these leaders no prior warning.)

The GC Executive Committee voted all of the reprimands. We in Europe were especially surprised, because unlike the North American union conferences that had pushed ahead with ordinations of women, we thought our procedure respected San Antonio’s red light. But we were reprimanded for not being willing to cross the intersection.

We made an official protest to the GC Executive Committee, as outlined in the General Conference policy about disciplinary processes. All we got was a half-page email from the GC secretariat telling us to concentrate on Covid-19 and the mission of the church. Later there was talk about a conversation with GC leadership, which we declined: since the reprimand was given publicly before the GC Executive Committee, we felt that it was unprofessional and unfair to deal with it in any place and with any other people than those who had voted it.

How did your field react?

It caused much grief within the constituency—and anger, to be honest. Right after that meeting I wrote an opinion piece published in Adventist Today, expressing my frustration with our clever German attempt to protest without protesting.

At our Executive Committee in December of 2019 I made a motion that we revert to the 2012 decision to ordain without regard to gender. (This would have the added advantage of aligning us with the South German Union Conference, because since 2016 two different types of professional certifications were being given to pastors in Germany.) The motion was tabled for another year to wait for possible reactions from the scheduled 2020 General Conference session—which, of course, didn’t happen. We postponed that decision again, waiting for reactions from the General Conference session of 2021.

The 2020 decision to table had a deadline to vote by December 2021. So when we learned that the session was again delayed by an additional year, our leaders obviously thought, why wait till December? We might as well vote on it now. A position paper by the NGUC president Johannes Näther provided a theological and administrative rationale for moving forward now.

What was the outcome of the vote?

It passed our executive committee by an overwhelming majority. There were only two opposed, and they didn’t oppose women’s ordination; they just favored continuing to wait.

For years we had been delaying this another year, and then another one; another GC session and then another—it seemed like the proverbial carrot dangling in front of us. So I guess we gave up following dangling carrots.

The action is retroactive for those not ordained in the intervening years. How many pastors will be immediately affected by this vote?

Around a dozen or so. Besides those receiving blessings since 2016, some female pastors were set apart for ministry before 2012 by just ordaining them as church elders—the traditional work-around for decades. Oddly, we didn’t directly address their situation in 2012 or 2016. They’ve waited the longest, some more than three decades. This year they will get their certification upgraded through the usual decision-making process.

The NGUC is one of two parts of a single united church organization in the territory. Is the South German Union Conference also adopting this action?

No such action has yet been put forward in the South German Union Conference, but my gut feeling is that it will not tarry.