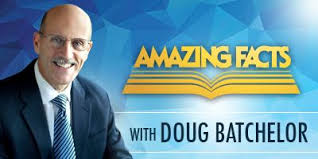 23 August 2018  |  Amazing Facts, the Adventist media ministry led by Pastor Doug Batchelor, which has been affiliated with the denomination’s Northern California Conference, has announced that it will become an independent ministry by the end of the year. Its constituency voted last week to “restructure to become an autonomous supporting ministry.”

Amazing Facts began in 1965 as a radio program featuring Pastor Joe Crews, who was an evangelist for the Chesapeake Conference on the east coast of the United States. The program began to be aired on stations outside the conference and in 1995, after the death of Crews, it moved to California where Batchelor was pastor of the Sacramento Central Adventist Church. Under Batchelor’s leadership, it has expanded into television, publishing and training evangelists, with operations in six nations outside North America, including Australia and the Philippines.

The ministry will change its name to Amazing Facts International, but there will be “no change in the … mission statement, for its employees, or in its relationship with the Granite Bay [Adventist] Church, where Batchelor currently serves as senior pastor,” and the board will be “composed largely of existing board members,” according to the news release announcing the change.

Adventists in North America are largely unaware of whether specific media ministries are affiliated with the denomination’s North American Division or independent ministries. They rarely advertise this aspect of their activities in part because they focus on communicating with the general public, especially people who are not Adventists.

Despite the communication focus of these ministries, most of their financial support comes from Adventists. Batchelor has positioned Amazing Facts as the most traditional of Adventist media ministries and come out strongly against ordination of women serving as pastors. At the same time the percentage of Americans and Canadians willing to tune in preaching broadcasts has declined steeply.

Batchelor stated in the news release that becoming an independent ministry “is simply overdue recognition that Amazing Facts has expanded its operations and now reaches far beyond what was envisioned when it was first formed in 1965 with three employees. The ministry now employs nearly a hundred staff as it prepares to move into its new 100,000-square foot church and office campus, called the Word Center.”