From ANN, October 1, 2015:    Known for his passion for evangelism, Alberto C. Gulfan Jr. regularly conducted several evangelistic series per year, sometimes as many as five or six, while maintaining his busy presidential schedule. 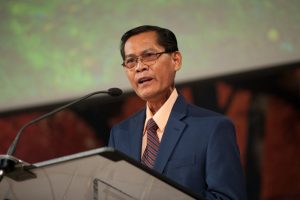 He served as the SSD president from 2003 to July 2015. Throughout his tenure, he supported world church initiatives such as Revival and Reformation, the 777 prayer program, and Mission to the Cities, and he was part of the SSD committee that developed the Integrated Evangelism Lifestyle initiative for the church territory.

In a letter of condolence to the family, Wilson added, “Pastor Gulfan will be greatly missed…Pastor Gulfan’s many years of service for the Lord are a testimony to God’s power in using an individual in powerful ways for His remnant church. The world church has been enriched through Pastor Gulfan’s service for God’s people. It was a great privilege to associate with Pastor Gulfan as a church leader and as a friend.”

The family appreciates the great outpouring of love and support during this time.

Funeral services will be held on October 4 at the Adventist International Institute of Advanced Studies (AIIAS) auditorium in Silang, Cavite, Philippines. The Southern-Asia Pacific Division has also set up a tribute page,[1] which will also have the live stream video feed of the funeral service.