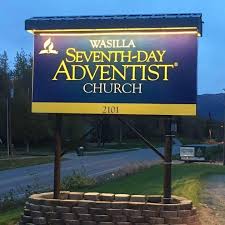 By Harry Banks, 3 December 2018 | On Friday (November 30), Adventists in Alaska were hit with an earthquake, along with the rest of the population. Many of them shared experiences on Sabbath at church.

Bonnie Barnett was home alone at 8:29 AM when she heard a great roar like a train, and then the ground and house shook violently. Ducking into a shallow protected area, she struggled to get on her feet to get out of the house; but she was unable to move. Terrified that she might die she prayed, “Lord, help me!” She watched a heavy toolbox and a table saw fly down the garage where she had planned her escape. Commenting on items broken or destroyed she said, “It’s all just stuff, stupid stuff … it’s all going to be gone one day.” As she is cleaning up the chaos, she said that she would be doing things differently in the future.

Riding out an earthquake on the fifth floor of a swaying building; caught in the cave-like back of a large supermarket with things flying off the shelves, roof and lights in motion; standing in the doorway leading to your garage while your house is in motion … All these and more were stories from the 7.0 magnitude earthquake that struck seven miles north of Anchorage, Alaska, on Friday.

Each church member had their own unique experience of the earthquake to share as the Wasilla Adventist Church gathered for worship on Sabbath. Some were no longer staying in their damaged home. Some had slept in their car. Some were sleepless from continuous aftershocks. For most, this was the strongest earthquake they had experienced in Alaska. Only a few could compare this quake with the Good Friday quake of 1964. Some of the veterans noted that this quake was more aggressive, had a sharper bite.

At the exact time of the quake, I was talking on the phone to my adopted sister, Chizuko, a prayer warrior in her own right. I was blessed to have her immediately prayer for the protection and safety of my wife and me. Usually I’m praying for others at their time of crisis. I felt blessed to have faith so abundantly available in a moment of chaos.

The most immediately obvious damage in the Anchorage area was rocks falling on roadways which had been carved from rock walls; parts of highways and roads subsiding; some bridges and overpasses that failed. No earthquake-related fatalities were reported

Pastor Kevin Miller, president of the Adventist denomination’s Alaska Conference and speaker for the day, reported that all the pastors and conference staff were accounted for and safe. Two church buildings, the Eagle River Church and the Anchorage Northside Church, were closed for services until structural damage could be evaluated. The Anchorage O’Malley Church was serving the community as an emergency shelter and housed 75 people Friday night.

One Wasilla member reported that her neighbor’s older log house had collapsed. Several people noted that an earthquake can help a person to rapidly adjust priorities. As Paul Ford led the song service he said that all day Friday, as the region experienced some 90 or more aftershocks, he kept thinking of one song, Hymn 213, “Jesus Is Coming Again.” When the congregation sang ”Heavings of earth” in verse three, it had a much more personal meaning than usual.

In an Earthquake, Prayers Are Short

One member asked a friend who works for the local electrical utility, how they had exercised their faith at the time of crisis. At the beginning of the emergency the utility company had 50,000 customers out of service. The situation she was coping with included water leaking at home, her children panicking, people at work shouting, her husband dispatched and driving into unknown likely hazardous conditions, and hands that wouldn’t stop shaking enough to type. All she had time to pray was, “Help me! Please!”

Others described their prayers. “Help me, God” was a frequent choice. Some members reported that their responsibilities of caring for panicked family members meant that faith had to be expressed in taking direct action, and that only afterwards was there a time to thank God for His grace in sparing life.

During the call for praise before the congregational prayer, Dillon said he had been delivering hay as the earthquake struck and did not actually feel the quake; he had only noticed snow falling off trees. As he arrived at his customer’s house he noticed his mother had several calls on his phone. He returned her call, and she asked, “Are you OK?” He replied, “Yes, are you?” not fully understanding her question until she explained there had been an earthquake. As he approached his customer’s house, she came out terrified. She had been holding her daughter upstairs thinking they were going to die together. He had one Amazing Facts magazine called “The Day of the Lord” in his truck, which talks about the second coming. He offered the lady the magazine, which she gladly accepted. She described an abusive alcoholic father who turned her against religion. But lately she had been wanting to come back to faith. Her house was a mess, she hardly had any dishes left, but she said that Dillon, showing up with hay, was like God telling her that it was all going to be OK.

Others described the event as “God trying to wake us up,” and expressed a desire to ask God for guidance in how to reach out to others to invite them to God’s mercy.

The congregational prayer offered by Bill Starn, first elder, expressed thanks to God and gave praise “even from under our desk or wherever it may be.” He asked that God help us to realize the shortness and brevity of our lives. He asked that that members be awakened and that the church and the General Conference “get on point.” He acknowledge there was less damage than might have been and that there was no loss of life. He prayed for the O’Malley church to be effective in their outreach to their neighbors. He requested that we recognize God’s blessings even in the midst of tragedy. Finally, there was a reminder that “today is the day of salvation. We may not have tomorrow” but we can always have confidence and not fear.

Pastor Miller’s sermon, “The Bottom Line” focused on Christ’s command to “Love one another, as I have loved you.” He traced John’s emphasis on Christ’s new commandment, noting Paul’s statement that love is the greatest of faith and hope and love. The story of the Good Samaritan emphasizes that love of God is connected to love of our neighbors as defined by the Samaritan’s example.

The question remains: Will love be a characteristic of today’s salvation? Have we been shaken up enough to keep Christ’s commandment to “love one another”?

Dr. Harry Banks is a retired pastor and theologian, and a community college professor in Wasilla, Alaska. He is a regular writer for Adventist Today.