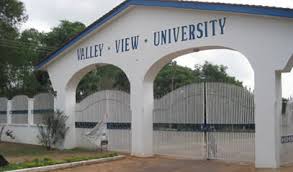 July 15, 2016:    Last week a total of 2,391 students were awarded degrees at Valley View University (VVU), the Adventist institution that operates on three campuses in Ghana. A total of 2,201 of these were college degrees and 190 were graduate degrees, according to a story from the Ghana News Association (GNA). Two thirds of the graduates were men and they came from 11 African nations.

The university fell short of its admissions goal by five percent in the 2015-16 school year, reported Nhyira radio news, a local FM station. Enrollment totaled 9,614 at the end of the school year on the campuses in Oyibi, Techiman and Kumasi, stated Dr. Daniel Bediako, vice chancellor of VVU.

About a quarter of the student body is Adventist, Bediako told a radio journalist. The university chaplains baptized 568 students this year, a 38 percent increase from the previous year, reported GNA.

A total of 28 academic programs are offered at VVU and the university is seeking accreditation for 12 more, including bachelor’s degrees in midwifery, mental health nursing, environmental management and other fields. These new programs are expected to help boost enrollment over 10,000. A four-storey men’s residence hall is under construction on the Techiman campus that provide lodging for another 1,200 students.

VVU nursing graduates had a 98 percent pass rate in the 2015 Nursing License Examinations, according to the radio news report. By the end of the summer the new university hospital will be operating to allow for increased enrollment in nursing and other health programs.

Another indicator of the maturing university is the fact that faculty members published 143 articles in peer-reviewed scholarly journals in 2014, the most recent year on record. That is 16 percent more than the previous year.

A number of student projects from the computer science department will be exhibited at the Africa Mobile and ICT Expo later this year. Benjamin Sarpaning and Sebastian Shamo, two of last week’s graduates, won the first and third place awards in the Ghana Multimedia Incubation Center software development competition. Another graduate, Eric Genyoh, received an award in the basic math and science category at the National Best Teacher’s Awards in 2015.

There are more than 3,500 Adventist congregations in Ghana with a total of about 500,000 members. Researchers estimate that the total number of Adventist adherents (including children and other non-baptized believers who attend church) is probably three times the membership number.